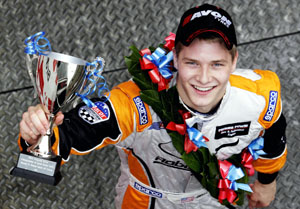 Josef Newgarden resumed his pursuit of an inaugural European championship title over the weekend (September 19-20), with another superb performance in the MSA Formula Ford Championship of Great Britain.

The talented American teenager was the first driver to the checkered flag in both Rounds 22 and 23 at the Brands Hatch circuit. Unfortunately his win in race one was subsequently disallowed during technical inspection over an interpretation of regulation 8A of the MSA Formula Ford Championship of Great Britain rules. This decision is now under appeal by the JTR Team and awaiting a decision from the MSA.

Despite the setback, Newgarden stayed focused on the task of just winning races, scoring a resounding victory in race two, bringing his win total to an impressive nine during his rookie campaign with one more still under appeal.

Given Newgarden had visited victory lane in each of his three previous visits to the famed Brands Hatch road course, it came as no surprise that the Joe Tandy Racing driver was immediately among those challenging for top honors in practice and qualifying. In the end, the 18 year-old rookie secured a front-row starting position for both races, posting the second quickest time in qualifying for race one, a mere 0.003s off the fastest time, and a pole position for race two.

When the lights went out for Round 22 on Sunday morning, both Newgarden and the polesitter got away cleanly, with the up-and-coming American slotting into second place. The No. 21 Robo-Pong/Race of Tomorrow Ltd/Joe Tandy Racing/Mygale SJ09 Premier Power car was not to stay in that position for long however, maneuvering into the lead coming out of Clearways before concluding the opening lap. Once out front, Newgarden paced the field under a brief caution and then drove a picture perfect race until a late race fuel pressure problem added some excitement to things. Newgarden never relinquished the lead in the first race, but did have to baby his car home in the final lap, taking the checkered flag 5.7 seconds ahead of the championship leader. In addition to the win, he recorded the fastest race, earning one more valuable bonus point.

Jubilation of yet another win at Brands Hatch unfortunately changed to disappointment and surprise shortly after the podium celebration, when the alternator connection on Newgarden’s car failed post-race inspection. As a result, the American was subsequently disqualified, prompting the Joe Tandy Racing squad to immediately file an appeal on the decision.

Newgarden, showing maturity beyond his years and the desire of a potential champion, quickly put the incident behind him for race two. Starting P1, Newgarden got an ideal launch from the traditional standing start and never looked back. While forced to initially hold off an attack in the opening Paddock Hill Bend turn, it quickly became apparent that the Robo-Pong backed driver was going to be unbeatable. Newgarden repeatedly set the fastest lap of the race, building a sizeable advantage of over 7.0 seconds at one point. When the checkered flag waved, it was the most dominant race win of the 2009 season, with Newgarden leading every lap and eventually winning by what some might call a country mile in Formula Ford!

“I’ve experienced another great weekend at Brands Hatch," said Newgarden. This place has been very good to me over the last year. I’m very disappointed a shadow has been cast over our win in race one and the way me and my JTR team have performed. Everyone in the paddock knows, we are straight shooters and we came here to race hard and to win fair and square. Even if my win in race one is allowed, it’s still going to be a long shot for us to win the championship, but I made a promise to myself and to Joe Tandy that I was going to do everything I could to bring home the championship to the JTR team. I won’t give up until they tell me it’s officially over…until then I’m just going to come out ready to run hard and win races. That’s all I have control over and I guess the rest is going to be up to the MSA and fate. I’ll let you know how it all comes out as soon as I know."

One thing is for sure, 2009 still has a lot of great racing to go, with the two final rounds of the MSA Formula Ford Championship of Great Britain coming up in a few weeks (October 3) at the Castle Combe Circuit. The on-track action continues following the series-finale, with Newgarden returning to the famed Brands Hatch Circuit for the 38th annual Formula Ford Festival on October 18. With Newgarden winning an impressive six (or seven) races out of the nine he has contested at Brands Hatch over the last year, odds are he’ll be in contention the next time you see him there!