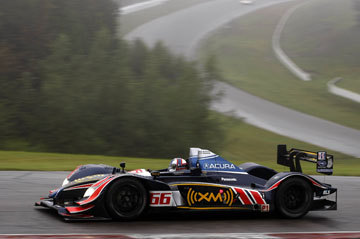 de Ferran Motorsports is hoping to add to its growing roll of honor as the 2009 American Le Mans Series moves to Road Atlanta for this year's running of the annual Petit Le Mans classic on Saturday 26 September.

The ambitious team – founded little more than a year ago by double IndyCar champion and former Indianapolis 500 winner Gil de Ferran – has been the pacesetter in the 2009 ALMS championship with four race wins, six pole positions and six fastest laps from the eight rounds held to date.

As well as all of the front-line ALMS regulars, the Petit Le Mans entry includes several of the top European teams venturing across the Atlantic for the prestigious 1000-mile/10-hour sportscar showdown held at the challenging 12-turn Road Atlanta circuit. Fresh from its victory at this year's Le Mans 24 Hours, Peugeot is fielding two of its diesel-engined coupes while defending Petit Le Mans champion Audi returns to the States with two of its diesel turbo prototypes. Neither has raced in ALMS since the season opener in Sebring – a race that saw the no.66 XM Radio de Ferran Motorsports Acura ARX-02a grab pole position on its debut. Further top class competition comes from the French-based petrol-powered Oreca squad.

"I'm very excited that we have a deeper field to compete against," enthuses de Ferran who shares the no.66 XM Radio de Ferran Motorsports Acura ARX-02a with regular co-driver Simon Pagenaud and reigning IndyCar champion Scott Dixon. "The presence of the Europeans is a great testament to both the event and the series and will make this month's Petit Le Mans one of the most exciting races to date. While the current rules do still favor the diesels, we will do our best to give them a run for their money. We managed to qualify on pole at Sebring and stay on the lead lap until encountering some new car issues that eventually led to our retirement. Since then we have evolved the Acura. It's still such a new concept but now we understand how to get more performance out of it."

As de Ferran's regular co-driver in ALMS, Pagenaud has played a major part in the developing Acura LMP1 program. "We are definitely stronger than we were at Sebring. We are better prepared and have more understanding of how to tackle a long race with this car," confirms the highly-regarded 25-year old Frenchman.

"It's going to be thrilling race and I'm really pumped up for it," he enthuses. "We're expecting to have some tough competition from the European teams. Their diesel cars have been developed mainly for Le Mans, so they will be quick on the straights but our Acura handles really well and will be strong on the twistier sections of the track. It's going to be a fascinating battle and interesting to see who comes out on top. I really enjoy the Road Atlanta track – it's one of my favorites on the ALMS calendar."

Adding to the team's strength, Dixon is reunited with de Ferran Motorsports for Petit Le Mans. It will be the 29-year-old New Zealander's third appearance for the team. He lined up alongside de Ferran and Pagenaud when finishing fifth in class at last year's Petit Le Mans and again earlier this season when securing pole position at Sebring. He's excited to be back in the no.66 XM Radio de Ferran Motorsports Acura ARX-02a for the prestigious 1000-mile/10-hour sportscar showdown.

"Driving Road Atlanta is a such a thrill behind the wheel of one of these LMP1 cars," reports the two-time IndyCar champion and winner of the 2008 Indianapolis 500.

As a previous winner of the 24 Hours of Daytona for Chip Ganassi Racing, Dixon knows what it takes to succeed in long distance sportscar events such as Petit Le Mans. He says: "Having done endurance races before with Gil and Chip's teams, you really have to have a team effort to go the distance here. Lots of elevation changes and high speed corners in these cars will make for another exciting Petit Le Mans – I can tell you that."