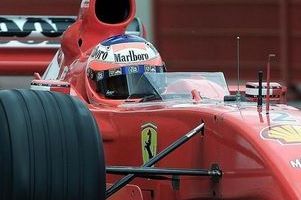 With the cockpit safety cell immensely strong, both freak accidents have demonstrated that drivers remain vulnerable to flying objects, with such occurrences so tragically claiming the life of Surtees before hospitalizing Massa only six days later. With Ferrari having trialed a safety screen with Rubens Barrichello at the wheel in 2001, then technical director Ross Brawn explains how such a part could be made compulsory in F1.

"We need to keep perspective on this," said the Brawn GP team principal. "From what's been seen last weekend and this weekend we need to have a proper study and see if something needs to be done. It gets into the area of structures, windscreens and canopies. Anything is possible, but I think first we need to digest what's happened and understand it properly. I must say, without knowing the details, it seems like the work that's been done on the helmets in the last few years has been essential today; the helmets have been improved quite a lot over the last few years, so the work that's been done there is a great credit to the people who initiated that and pushed it through."

With canopies – an effective roof – having been considered in the past, worries surrounded the possibility that drivers could be trapped in stranded or burning vehicles more easily. "I think it's time to look at the whole thing and take a balanced approach," Brawn went on. "You can have covers and you can have canopies but you also have to be able to get at a driver to extract him – you don't want a structure that collapses down on a driver.

"There are a lot of secondary considerations but it's something we will look at, for sure. In the history of F1 this is a rare occurrence; the sides are very high now and we have all the headrests, so it's pretty rare, but we have to look at it seriously and see if there is something we can do. If we need to react, I'm sure we will react promptly. What we don't want to do is make the situation worse."