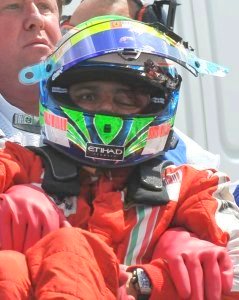 UPDATE Felipe Massa had a cut on his head before being sedated and airlifted to a Budapest hospital, his countryman and rival Rubens Barrichello said after qualifying at the Hungaroring.

A piece of tubular metal debris, apparently from the rear of Brazilian Barrichello's Brawn car, struck Massa, who drives for Ferrari, in the face in the dying moments of the Q2 session.

A spokesman for the Italian team said Massa, last year's championship runner-up, was "stable" after being ambulanced to the circuit medical centre and then helicoptered to hospital.

"He was very agitated," Barrichello is quoted as saying by Britain's Daily Telegraph. "He had a cut in his head, which could have been from the part of my car that was on the track.

"He was talking, was conscious, but they have to analyze the cut (in hospital). He was moving his arms and legs, they had to make him sleep because he was agitated," Barrichello added.

Given the FIA's attitude towards head injuries, it is almost certain that Massa will not be starting the Hungarian grand prix on Sunday from tenth position.

Here is a video of the accident. Note the metal tube hitting him in the helmet.

07/25/09 (GMM) Felipe Massa was stretchered into the Hungaroring medical center following a bizarre crash during the Q2 qualifying session.

The Ferrari driver did not steer before slamming head-first into a conveyor belt-covered tire barrier at high speed.

The rumor in the wake of the crash was that the Brazilian may have been struck by debris, although speculation he was unconscious at the point of impact seems wide of the mark given the tire marks in the asphalt run-off area.

Massa, 27, was taken by ambulance to the medical centre and the beginning of the Q3 session, which he was due to participate in, delayed.

He was conscious when taken into the circuit facility, and his countryman Rubens Barrichello visited him and reported afterwards that Massa was talking.

Marshals were seen on the circuit in the wake of the crash, scanning for debris that may have struck Massa.

FIA officials ushered cameras out of the Brawn garage during the delay, as the rear suspension of Barrichello's car was inspected.

The Brazilian veteran confirmed that "something broke on the back of the car", and slow-motion replays show Massa was indeed struck by something at speed.

The Brawn team confirmed that a piece of the rear suspension was missing.

Former team boss and now BBC commentator Eddie Jordan said one of his unnamed "paddock spies" believe Massa, to be helicoptered to hospital, is only mildly concussed following a blow to the chin.