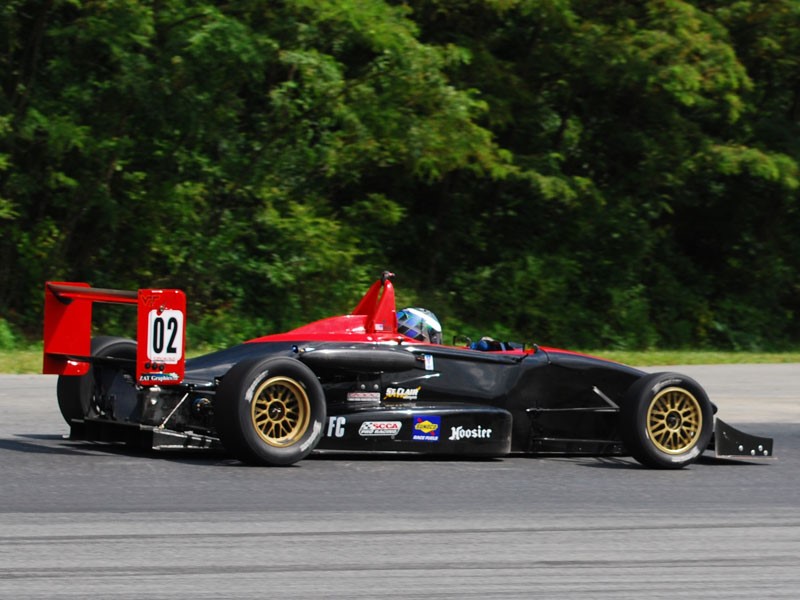 On a beautiful day in West Virginia, Matthew Inge passed Chris Miller and inherited the lead when Tim Minor spun to notch his second win of the season for St. Clair Motorsports and gained back a few valuable points on championship leader Chris Miller who finished second. Miller started from pole and gained bonus points for fastest race lap. Fabio Orsolon finished third with Remy Audette, hanging on with a broken differential and Victor Carbone rounding out the top five.

“This was an absolute team effort," said Inge in victory lane. “I also have to thank my parents for all their support, the car St. Clair Motorsports prepared was totally awesome. I managed to get by Chris (Miller) going into one and then we caught Minor. He was sliding the car all over the place and eventually spun off. From there I just made sure to keep enough of a gap to make sure Miller couldn't catch the air off my rear wing down the straight."

Miller said: “We are doing exactly what we need to do for the points and Matt (Inge) was just perfect today. He drove a great race and never made a mistake. I just didn't have anything for him at the end."

In the points battle, Inge gains three points back on leader Chris Miller. Per F2000 rules, with the lowest two races dropped, Miller leads fellow American Inge by a slim 23 points in the championship with just three races to go.

Fabio Orsolon bags his third podium finish of the season as Alegra Motorsports continues to pick up the pace, teammate Victor Carbone came home in fifth. “We are coming," Orsolon said. “The start was a little nuts and going into turn one I braked as late as I could, getting by at least one car. From there we just sort of followed the lead pack and near the end of the race the car developed some crazy understeer, so I was just hanging on."

As Inge looked for a way by going into one, Minor lost control of his #88 Van Diemen, spinning. This gave the lead to Inge, who controlled the pace for the race of the race, taking his second win of the season by just a few tenths over Chris Miller.

“I just turned into turn one and I don't know," commented Minor. “I'm not sure if there was dirt on the track or I ran over something but there was a ton of grip and then there was no grip and I spun off and was stranded. The good news was that we didn't damage the car and will be back at the front tomorrow."

Rob Nicholas took his second straight Masters class win, coming home in sixth overall. Nicholas started eighth and was slowly working his way up the field before an incident with Keith McCrone cost them both valuable track position.

“I was trying to outbrake McCrone going into turn one and both of us just ran out of race track, I got back going again and just started picking off cars," Nicholas said. “The car doesn't really come in for five laps or so but then it just takes off."

A mid-race tangle between Jonathan Scarallo, who was running a solid seventh, and the lapped car of Len Amato ended both their days prematurely.

Scarallo's Group A teammate, Colin Alexander, also suffered a DNF when his gearbox failed. Alexander explained: “Things were going really well, I was right behind Johnny (Scarallo) in eighth and the coming out of turn one I went to shift into second and there was nothing there, no gears at all. I just pulled the car off into a safe spot but I am really happy with our pace up until that point, it shows we are going to be quick tomorrow."

Follow the action on F2000ChampionshipSeries.com tomorrow as the field starts with a 10:25am qualifying session followed by a 2:30pm green flag.