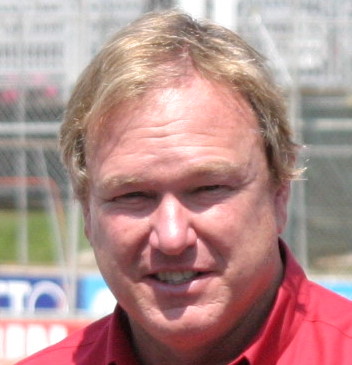 Seneca Lodge patrons put down their salad forks and Labatt's Blue bottles to applaud when Dale Coyne and his wife, Gail, walked through the door with the winner's laurel from the Camping World Grand Prix at The Glen.

It's certainly well-deserved and well overdue. Dale Coyne Racing recorded its first victory; not only in the IndyCar Series but overall. Driver Justin Wilson, who signed before the start of the season, delivered the package Coyne has been waiting 25 years and 558 races for.

"Congratulations to Dale on his first IndyCar win," said Roger Penske, who pensively watched one of his drivers, Ryan Briscoe, attempt to reel in Wilson over the final six laps on the 3.37-mile Watkins Glen International course. "Dale has been a great friend and a great competitor for many years and we are very happy for him and his team. They worked very hard for this. I thought Justin Wilson drove a great race and he certainly deserved the victory."

Dale Coyne Racing's previous best finish in the IndyCar Series was third in the season opener at St. Petersburg, and its best overall in open-wheel racing had been second with Bruno Junqueira in a 2007 Champ Car-sanctioned race at Zolder, Belgium.

Memories rushed over Coyne, who turns 55 on July 8, like nearby Niagara Falls as he attempted to get his thoughts around what seems like a lifetime in motorsports as a driver with 34 major open-wheel racing starts and team owner that helped launch the careers of Paul Tracy, Michel Jourdain Jr., Alex Barron and Robbie Buhl among others. Even IndyCar Series team owner Eric Bachelart (Conquest Racing) drove for the team in 1992-93 and '95.

"You have a passion for this and you love it, and you keep fighting and going forward," Coyne said. "When we have lean years or bad years and don't have a sponsor, it just makes you try harder, and I think that's paid off. The last few years we've tried to do a better job with what we've put together.

"This year, Justin became available. Some higher-quality engineering staff became available. And the wife and I talked about it. It was a financial commitment to do it, but we did it and said we're going to make this thing work. So we worked hard to pull all the pieces together, but that's because we have a passion for the sport."

Wilson, who gave team owner Paul Newman his final open-wheel racing victory at Belle Isle last August and Coyne his first, also received an enthusiastic reception as the entire crew scurried across pit lane to stand on the wall and cheer as he roared to the checkered flag.

"I just didn't want to slow up too early because I know the finish line is way down there," he said. "It's a pretty cool feeling to drive by and see them there. Their passionate about what they do, the results. Whether it's the guys working on the car, the guys going over the wall or the engineers, everybody plays their part. And without any one of those guys (the victory) wouldn't have been possible."

Half of the closing eight races are on road/temporary circuits, which is encouraging to Coyne and Co., and Wilson has been victorious on the streets of Toronto (2005) — the next stop on the schedule.

"We're slowly picking things up, and we know where the next improvement's going to come from," Wilson said. "(At Toronto), you can be very close and still a long way off. So it's the fine details that make a difference. That first run you hit the track (July 10) at Toronto you'll know whether you're really close or you have a few changes to make.

"The only thing that's going to taste sweeter than this win is our first win on an oval. And that's what we'll work towards and we'll get there."

Coyne doesn't have any doubts. He's vested in the IndyCar Series.

"That's what's good about the sport is that a team with our resources and our budget can win a race," he said. "Everybody thinks that the top two teams are going to win every race. But I think it shows for this series to be strong we need more teams here. We need not to have to subsidize teams and we need all those things to happen in this economy to make this series work and grow.

"I think us winning a race and any other team that can win a race helps to show that. A lot of teams from Grand Am, wherever they might be from, I think they can come here, get the pieces they need, the drivers they need and do the job. And I think that's very good for the sport.