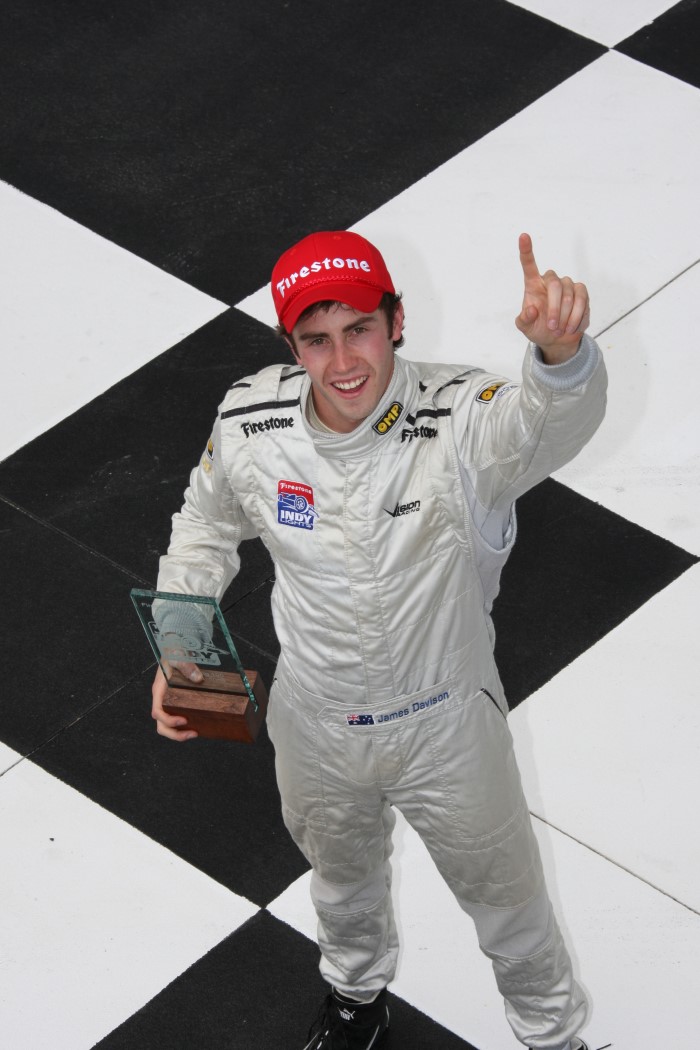 James Davison earned his first pole start of the season and second of his Firestone Indy Lights career July 3 with a quick lap of 1 minute, 37.1780 seconds (124.843 mph) on the 3.37-mile, 11-turn Watkins Glen International course for the Corning 100 on July 4.

The Vision Racing driver will be joined on the front row by Sebastian Saavedra, who posted a quick lap of 1:37.2694 (124.726) in the No. 27 Automatic Fire Sprinklers Inc. car for AFS Racing/Andretti Green Racing.

JAMES DAVISON (No. 21 People*s Liberation/Vision Racing, pole): "It was a matter of time before we secured the results we deserved as a team. I put in three solid laps on the tires, and I knew it was going to be a tough time to beat. I came in with about five minutes to go, and I was biting my fingernails and we stayed on top. It's a great result we've secured. Now it's about trying to get the race victory. I'll be doing everything I can to get that tomorrow."

SEBASTIAN SAAVEDRA (No. 27 Automatic Fire Sprinklers, Inc, second): "I think we still have some time missing by myself, not because of the car. I think the car was perfect. I made a small mistake in the last corner going to into what is the (finishing) turn for us (Turn 9). I think there's at least one-tenth that I lose there. Still I'm very happy. Now it's time to show what we've got. It's time to start getting points back that we've missed in the last few races. There are so many points we could have had from those races. I'm pretty confident we can have a good weekend."

JAMES HINCHCLIFFE (No. 7 Hinchtown/Sam Schmidt Motorsports, third): "I think given the amount of track time we got, P3 is a pretty respectable position. We struggled a bit in a practice this morning and, to be fair, even the first part of qualifying was a little bit nail-biting because we didn't quite have the balance we needed or the speed. The car felt fine. We just didn't have the speed. On our second set of tires, we managed to find a big chunk of time, a nice rhythm, and we pumped out a lot of laps in that 1:37.3 bracket, but we just couldn't put together that extra tenth and a half we needed for pole. We're starting on the inside for tomorrow, which I'm really pleased about, and we're still learning. I know the AGR guys tested here earlier this year, so they pretty much know where their cars are at. I know of a couple of places where we can make ours a bit better. We'll use tomorrow morning's practice session to tune it a bit and just hope for a really strong race car."

J.R. HILDEBRAND (No. 26 ARPRO, fourth): "We had a pretty good car for qualifying. We weren't going full throttle, and we are still starting on the second row. I got caught up in some traffic on the last stint of the run, so I think we could've picked up some time there, which is frustrating. But we have a really good car. We'll focus on the race setup tomorrow morning and make any last-minute changes. I hope we can make our way through traffic and have a strong finish."