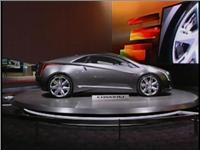 Nearly all the manufacturers at the 2009 Detroit Auto Show this week showed up with either new hybrid or concept electric vehicles, all in an effort to become more fuel-efficient. This has left several automakers feeling vindicated, since for years lithium-ion batteries were not seen as the answer. Cadillac rolled out its concept Converj, which uses the same propulsion technology as the Chevrolet Volt, and Chrysler made a splash in rolling out 5 future electric vehicles. Click image to watch video.

Recall the many articles AR1.com has published touting the fact that the future of the automobile industry is electric cars recharged with electricity produced by Nuclear Power plants. It's time the world rids its dependence on pollution producing fossil fuels. Electric cars are the future and the racing industry had better wake up to this fact or suddenly it will find itself out of touch with the real world.