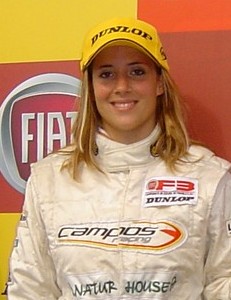 21 year-old Gachnang, who is the cousin of GP2 star and Red Bull F1 test driver Sebastien Buemi, has experienced success on both sides of the Atlantic. She joins Formula Two after finishing third in the 2008 Spanish Formula 3 Championship and second in the Copa de EspaÃ±a. In 2007 she raced in the American Star Mazda series, recording an unbroken string of top ten finishes, as well as finishing fourth in the Austrian Formula 3 Championship and competing in selected F3 Euro Series races.

Natacha Gachnang said: “I’m delighted to be doing Formula Two next season because it brings me that much closer to achieving my dream of getting into Formula One. To be honest, I try not to think about being a woman in a male-dominated sport. At times it has probably helped me, but I think it has also been hard to get people to really believe in me as a driver, especially as I climb the motorsport ladder.

“Everyone is talking about the test with AT&T Williams, but for me this is just a bonus – the real appeal of the championship is how well it has been put together, and how good the competition is going to be. F2 will be a big step up from F3, and people might expect me to struggle, but I’m really looking forward to the challenge and showing everyone what I can do. I have already raced against Sebastian Vettel in Formula BMW ADAC so I’m not daunted; as a driver you want to be racing against the best because you need to be constantly challenging yourself to get better."

Jonathan Palmer, Chief Executive of championship organizer MotorSport Vision, added: "I'm delighted that Natacha has joined Formula Two. I had the pleasure of racing with Desiré Wilson – one of the few women who has made it into Formula One – in the Brands Hatch 1000km race in the early 1980's, and she was mighty quick. It would be fantastic if Natacha could achieve similar success; certainly she has had some outstanding results and is the best female prospect around at the moment, so we're thrilled to have her in Formula Two."