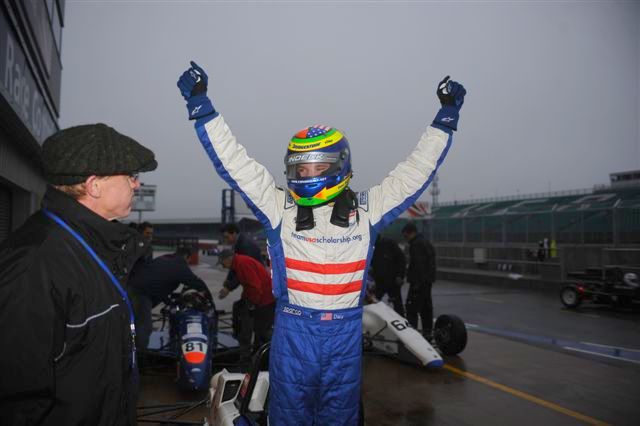 Daly, who started fourth on the 36-car grid for the 15-lap Grand Final, which was held in cold, wet and extremely treacherous conditions, took the lead at half distance when Scottish Formula Ford Champion Graham Carroll slid off the road at Luffield corner. Newgarden also had made a mistake after leading the opening lap.

Daly, 16, from Noblesville, Indiana, controlled the remainder of the race and set the fastest lap for good measure. He became the youngest driver ever to scoop the Walter Hayes Trophy, which is named after one of the originators of Formula Ford. The presentation was made by Walter Hayes’ widow, Elizabeth, in the Clubhouse of the famed British Racing Drivers Club.

“It feels very good," said Daly, who won this year’s BFGoodrich/Skip Barber National Presented by Mazda before being awarded a Team USA Scholarship. “It feels like I have a monkey off my back [after some niggling problems earlier in the week and at Brands Hatch]. Now I can go home happy."

The two Americans were drawn in the second of two Semi Final races which began the afternoon’s activities. After Carroll scored a clear victory in the first race, followed by veteran Dutchman Michael Vergers, Newgarden made full use of the pole position for Semi Final Two by holding the lead into Copse Corner from Robert Barrable and Daly.

In very wet conditions, Newgarden went on to score an accomplished victory. Daly took advantage of a problem for Barrable to make it an American one-two.

“It’s not over yet," said Newgarden. “The car wasn’t perfect, I had a bit too much entrance and mid-corner understeer. It was a pretty uneventful race so I concentrated on the car, thinking what we can do [to make some setup changes] for the Final."

Carroll was given the advantage of starting on pole for the Final, due to his Semi Final having been held in slightly dryer, slightly quicker conditions. Newgarden lined up second, followed by Vergers and Daly on Row Two.

The start was clean, with Carroll holding onto his lead from Newgarden, but only as far as Brooklands at the end of the main back straightaway, where Newgarden took advantage of the draft, then ducked cleanly to the inside.

“I was looking good out front," said Newgarden. “Once I saw I had a bit of a gap, I tried to put my head down."

Unfortunately, in the appalling conditions, Newgarden went a little too deep into Brooklands on Lap 2. An instant later he was bounding through the huge gravel trap on the outside of the turn. Newgarden somehow extricated himself from the gravel (and again when he made a similar mistake a few laps later) but could do no better than an unrepresentative 14th-place finish.
Daly grasped second place from Vergers in a tidy maneuver under braking for Beckett’s on Lap seven. One lap later he was gifted the lead when Carroll fell afoul of the slippery track in Luffield.

“It’s been a great experience," said Daly. “I want to thank everyone for making this possible for Josef and me."