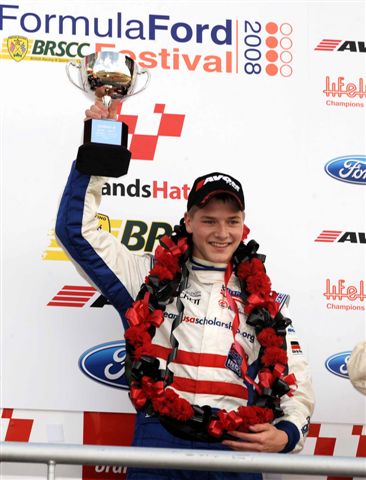 UPDATE A UK reader writes, I think you are not telling the whole story with regards to Newgarden and Daly’s success at Brands Hatch. Team USA was taking part in the ‘Kent’ event which is not the main part of the FF Festival. The Duratec and Zetec classes are above the Kent class so in reality they competed in the 'C' class of the event. It was a terrific achievement nonetheless but you are overstating it a touch. Declan Brennan

10/19/08 Josef Newgarden made a little bit of history today as he became the first American driver ever to win the famed Formula Ford Festival at Brands Hatch. Past winners of the event, which dates back to 1972, include current Formula 1 stars Mark Webber and Jenson Button.

Team USA Scholarship teammate Conor Daly also played a starring role, rising from the back of the grid in his heat race to finish a sterling sixth in the 25-lap Final.

The two American teenagers confirmed they had every right to display optimism following what might best be described as a character-building time during their Heat races on Saturday.

During the first 15-lap Semi-Final race this morning, Newgarden made a superb start, vaulting from fourth on the grid to second on the opening lap, and followed that with an opportunistic pass for the lead on Lap 2. He then checked out, posting fastest race lap at 50.508 seconds (85.43mph) and finishing over four seconds clear of his nearest challenger – a country mile in the ultra-competitive world of Formula Ford.

In Semi-Final 2, Daly also displayed his prowess by rising from 20th on the grid (due to a broken throttle linkage on Saturday) to finish hot on the tail off the leaders in sixth place. He missed posting the fastest lap by a scant 0.039s.

The 25-lap Final began with 17-year-old Newgarden, from Hendersonville, Tenn., on the coveted pole position and Daly in 12th place, on the outside of row six among the 28-car field.

“I made sure to do plenty of burnouts and had another stellar start," recounted Newgarden. “I led the first six laps until the caution flags came out. I knew I had to be on the ball once the Safety Car’s lights were off so that I could get a gap on the field. I did just an OK job at that and just managed to hold off the pack into Paddock Hill Bend. As we got deeper into the laps, I was getting increased pressure from the train of cars behind me. About halfway into the race [Lap 10], I made a slight bobble into Paddock Hill and Patrick McKenna was able to slip his nose inside of me and take the position. At this point I was just focusing on crowding his mirrors and waiting for any opportunity to make a move. I looked twice into Kidney and finally was able to complete my pass into Clearways [on Lap 13]. In the next couple of laps I was able to break the draft and finally get some breathing room.

“This was the point were I became the most nervous," Newgarden continued. “I focused on doing the same thing I did in the semi-final by putting my head down and just running fast consistent laps. There was a rush of relief at the checkered flag. I was so happy to take the victory. I was so happy for the Team USA Scholarship program and Cliff Dempsey Racing, and the thought of having my name stand in the record books with guys like Mark Webber and Jenson Button was overwhelming. I know this victory and the memories I have will stay with me for a lifetime."

Daly underlined the potency of the Team USA Scholarship/Cliff Dempsey Racing effort by moving from 12th on the grid to sixth in the 25-lap Final – on a track where overtaking is notoriously difficult.

The two youngsters will have a busy week ahead of them with visits to the AT&T Williams Formula 1 team, Lola Cars, the Subaru World Rally Team and Aston Martin Racing. They will also undertake one more test day in preparation for the Walter Hayes Trophy event which will take place at Silverstone on the weekend of November 1-2.