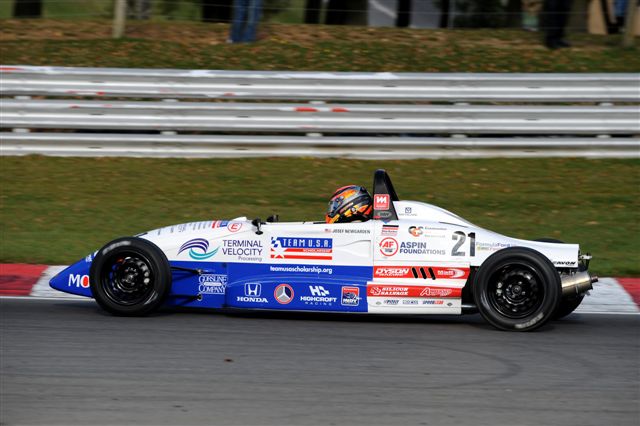 After the elation of qualifying on the front row for their respective heat races yesterday, Team USA Scholarship winners Josef Newgarden and Conor Daly were brought back to earth this afternoon.

The two American teenagers faced a steep learning curve with their first-ever standings starts, not to mention their first experience of the no-holds-barred cut-and-thrust of British Formula Ford competition. Nevertheless, pole-sitter Newgarden earned a fourth-place finish in Heat One, while Daly’s car was stricken by a broken throttle linkage while running third in the early stages. Daly returned to the fray after a lengthy pit stop but was not classified in the final results.

“The European driving style is much more aggressive [than in the U.S.] and you must learn how to cope with it," said Newgarden. “Every little opportunity to pass must be taken advantage of and you must work to minimize your mistakes. I got a little bit of wheelspin at the start and Graham Carroll got past me going into Paddock. Then I got a little loose on the exit and someone else just got their nose alongside me going up the hill into Druid’s. I didn’t do a good enough job of blocking, so I lost another couple of places."

Relegated to fourth place by the completion of the fraught opening lap, Newgarden soon discovered his #21 Team USA Scholarship/Cliff Dempsey Racing Ray GRS07/08 wasn’t handling nearly as well as it had been during qualifying.

“There was some oversteer on turn-in and then the car went to understeer on the exits," he said. “But it was good practice to figure out how to start these things and then try to find some passing zones.

“The good news is we’ll have new tires for tomorrow and I’m sure we’ll have a good car. Passing at Brands is very difficult, so your start and opening laps are very important to get right. Tomorrow my plan is to have a strong start and gain some positions on the opening laps. We’ve still got a good chance of winning this thing."

Heat Two saw Daly also lose a place at the start, after which he settled immediately into an extremely respectable third place in the #22 Team USA Scholarship/Cliff Dempsey Racing Ray…until Lap 3, when his car’s throttle abruptly stuck open at the entrance to the tricky Clearways corner.

“Considering it was my very first-ever standing start I think it went well," reckoned Daly. “Things, however, did not go well after that…

“It was very unfortunate having the throttle stick wide open because the car’s handling was just coming in. I was lucky enough to get the car back to the pits without any damage but the engine had bent a valve."

Daly, too, maintains an upbeat attitude heading into tomorrow morning’s Semi-Final races which will determine the grid placings for the 25-lap Final. Newgarden will begin his race on the fourth row of the grid, while Daly will have to start from the back.

“Looking ahead to tomorrow, I think it will be a lot of fun for me," said 16-year-old Daly, whose father Derek won the Formula Ford Festival at Brands Hatch in 1976. “I will learn a lot more about passing and coming from the back of the pack. It is still very possible to come from behind and win this race. I am trying to be very positive going into tomorrow because only good things can happen!"