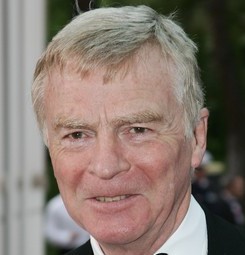 Mosley, 67, the president of the FIA which governs Formula One, is shown brandishing a whip and wearing ankle chains.

Mosley's father Oswald Mosley was a friend of Adolf Hitler and led a British fascist party in the 1930s which led to him being interned by the British government during World War II.

Jewish representatives accused Mosley, who is one of the most powerful men in world sport, of insulting the victims of the Holocaust.

Stephen Smith, director of the Holocaust Centre, told The Times newspaper: 'This is an insult to millions of victims, survivors and their families.

'He should apologize. He should resign from the sport.'

Karen Pollock of the Holocaust Educational Trust told the Times Mosley's behavior was 'sick and depraved'.

Stirling Moss, the British former world champion racing driver whose father was Jewish, said Mosley had no choice but to resign.

'I don't see how he can continue. I hope he can, frankly, because I think he's very good at what he does. Straitstimes.com