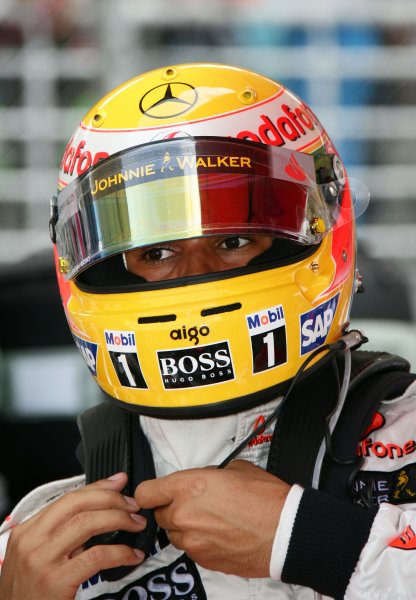 Race three of the 2008 Formula 1 World Championship takes place in the Kingdom of Bahrain. The Vodafone McLaren Mercedes team arrives at the Bahrain International Circuit leading the Constructors’ table with a total of 24 points. Lewis and Heikki are first and fourth in the Drivers’ standings with 14 and 10 points respectively.

The Bahrain Grand Prix is the first Formula 1 World Championship race to be held in Middle East, the track was officially opened on 17th March 2004 prior to the inaugural race, which took place on 4th April 2004. This race, which was won by Michael Schumacher, was given the award for the 'Best Organized Grand Prix' by the FIA.

The Bahrain International Circuit was purpose built for Formula 1 with the aim of creating exciting racing. Can you talk us through the track layout, specifically the overtaking opportunities?
"Bahrain is a really cool circuit; it is quite different to any other because you are literally driving round the desert. There are no trees or buildings as you are driving round, just desert. I really like the track, there are a lot of opportunities to overtake for example turns one, four, seven, and ten. With all the straights you can do a lot of slipstreaming and then make sure you get good exits. So in terms of racing it is a very good track. The layout is a great design, starting off with a very long straight, then down to a very tight first gear corner and then you accelerate through a slight kink before going up another long straight. It is a curvy circuit with lots of kinks and gradient changes that are quite large in some areas. Also the wind plays a big part bringing sand onto the track that means any part that is off line is very slippery. It is very hot in Bahrain, as with Australia and Malaysia, so it is ideal that these three are together at the beginning as they are all very physically demanding and you can prepare for them all at one time."

You have raced at the track on a couple of occasions, what are you main memories?
"I love the Bahrain race, it is one of the ones I really look forward too, like Monaco and Spa. I have a lot of good memories of the track, last year I had a fantastic race. It was great fun and I took my third podium in Formula 1 and took the joint lead of the World Championship, it was a bit unreal. The best memory is from 2004, I recovered from a disastrous qualifying in F3, and I ended up in 23rd. I worked my way back up the grid to win the race. That was one of the most emotional races I had been involved in up to that point."

How have you spent your time between Malaysia and Bahrain?
"I spent some time in Thailand; my trainer came along as I had a pretty intensive program of physical training for the time we were there."

Bahrain is renowned for wind and the surrounding sand, how do both these factors affect the track conditions?
"The most obvious thing is that the sand makes the grip level lower and the tires do not bite to the tarmac quite as well and it can be slippery in places. The track evolution also is quite high at Bahrain because when we start driving round the track, the sand flies away. It also puts some more stress on the engines, as there can be some dust in the air that goes into the engine. The weather is also quite changeable, and I guess this can happen very quickly because we are in the desert."

What demands does the Bahrain International Circuit place on the Bridgestone Potenza tires?
"It is quite tough on the tires. There are some hard braking areas and high speed chicanes where you are changing the direction at high speed, that always loads the tires. We need to be aware of that and look after our tires as much as we can over the weekend. It will be a key factor during the race."

Are there any corners or sections of the circuit you particularly enjoy?
"Turns six and seven, which are a fast right the fast left. They are a great feeling in a Formula 1 car. It is a high speed chicane that we take in fifth gear."

How have you spent your time between Malaysia and Bahrain?
"I went back to Europe after the race in Sepang and spent some time at the McLaren Technology Centre with my engineers. I then went home and focused on training"

Can you outline why the Bahrain International Circuit is notoriously tough on brakes and the measures the team takes in preparation.
"The nature of the Bahrain International Circuit is very similar to Canada. Consequently it’s tough on brakes as there are some big stops at the end of the high speed turns, which makes things exciting from an overtaking point of view, but is extremely tough on the cars. In addition the lack of key features around the track means that the drivers really have to concentrate on their braking points as traditionally they use landmarks to pick them. In preparation for the race and together with our Japanese Partner Akebono we have focused on improved brake efficiency and cooling."

The Vodafone McLaren Mercedes team did not attend the pre-season test at the track, do you feel this will lead to a disadvantage?
"Of course we would have liked to test in Bahrain but we do have to prioritize where we spend our time. Over the winter we have improved the aerodynamic efficiency of the car and cooling generally so it’s not currently one of our vulnerable points. We have good data from running at the Bahrain track in previous years so we are confident it will not prove too much of a disadvantage."

What has been the focus of the team in the two weeks between Malaysia and Bahrain?
"The focus has been on reliability after the first two races which on the circuit have been pleasing but as always behind the scenes there are lots of things you need to attend to. In particular the pitstops and the problem we experienced in Malaysia with Lewis’ right front wheel. We have good pace in the car and need to maintain our momentum so obviously we have continued to develop the car in the wind tunnel. However we are still evaluating whether we will take some of the aerodynamic developments with us to Bahrain."

How do you rate the back-to-back races in Australia and Malaysia at the beginning of the season and how do you evaluate the competitiveness prior to the third Grand Prix of the year in Bahrain?
“Both races were high class and interesting. The first Grand Prix saw a superiority of both Vodafone McLaren Mercedes cars, and the second race was dominated by both Ferraris. However, neither Ferrari nor we managed to achieve the 1-2 victory, which seemed a possibility in both races beyond the halfway mark. In Melbourne, Heikki was hampered by the third Safety Car period; for Ferrari in Malaysia, it was a driving mistake, by their own account. BMW Sauber performed well in both Grands Prix, finishing second twice and without doubt belongs to those teams that are capable of fighting for victories by their own means."

What will happen to the race engines, which were used in Australia and Malaysia?
“The two engines, which powered Lewis’s and Heikki’s MP4-23s in Melbourne and Kuala Lumpur, completed a total of 1,903 kms. Both engines were sealed; one of them will be handed over to the FIA, according to the rules, as the homologation engine for the next five years. The other engine will undergo an in-depth examination, like all other engines after two races, and will then be used for development work on the dyno where it usually covers a similar distance like in both Grands Prix."

The Bahrain Grand Prix is expected to be another race in hot weather. What are the specific challenges of this track?
“We expect another race in high ambient temperatures and with similar challenges like Australia and Malaysia. The sand blown onto the track consistently is a typical characteristic of the Bahrain International Circuit; it often suddenly changes the grip conditions. The engines’ air filters are even more thoroughly checked and more often changed than usual to avoid the intrusion of sand particles. Due to the track layout with four long straights followed by tight corners each, the engines’ load profile is in the medium range. About two thirds of a lap on the 5.4km circuit will be run under full throttle."