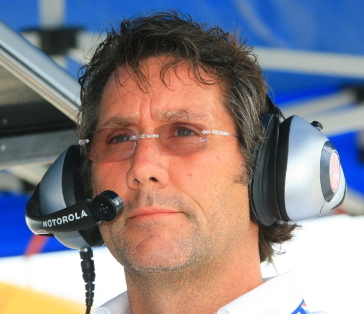 Open-wheel racing begins a new era this weekend when teams from the Indy Racing League and the Champ Car World Series come together at Homestead-Miami Speedway for the first event of the unified IndyCar Series.

Tony George, who as chief executive officer of Indianapolis Motor Speedway started the split and helped end it, is eager to get the season rolling. He welcomes the challenges his organization faces. "Bring it on," he said earlier this week.

George said he considered it essential for the sport's future that IMS provide leadership and direction in the reorganization. Champ Car's four owners relinquished control when they signed an agreement in principle with George on Feb. 22. The contract will be final when Champ Car completes its Chapter 11 filing in U.S. Bankruptcy Court in Indianapolis.

Now the undisputed leader of open-wheel racing, George said the support of his family made increasing his role a logical decision. Among the family members directly involved in the operation are George's sons, driver Ed Carpenter and Tony George Jr., along with George's nephew, Jarrod Krisiloff, director of multimedia productions of IMS Productions.

"I know my kids and their generation (of the Hulman-George family), my nieces and nephews, feel strongly about Indianapolis Motor Speedway and being a part of it, and they want to provide leadership (for the sport)," he said.

To be more inclusive, George said a name change for the series is being considered.

He acknowledged that "IRL" carries a politically charged connotation with many people coming from the Champ Car side. "Maybe we could get back to 'Indy Car World Series,' " George said.

No change is expected before he secures a title sponsor.

George also would like the series champion to receive the Vanderbilt Cup, America's first auto racing trophy. The Cup has gone to Champ Car's champion since 1996, but is unavailable to the IRL until the CCWS bankruptcy case is settled.

The Champ Car drivers note the olive branch George and the existing IRL teams have extended.

"They couldn't be better," Graham Rahal said. "They have really gone out of their way for us."

George didn't hesitate when asked if he could go back and alter the decision he made to create the IRL as an alternative to CART in the mid 1990s.

"Yeah, I'd do it again," he said. "But with the benefit of hindsight I'd do some things differently. When we made bad decisions, I tried to correct them with what I thought was best as soon as possible."

George said one of the IRL's first mistakes was stipulating 25 guaranteed spots in the Indianapolis 500 for league regulars, a move that drew considerable ire from people who thought the historic event should be open equally to all participants. That led CART to stage a race at Michigan International Speedway on the same day as the 500.

"We shouldn't have done that," George said. Indy Star