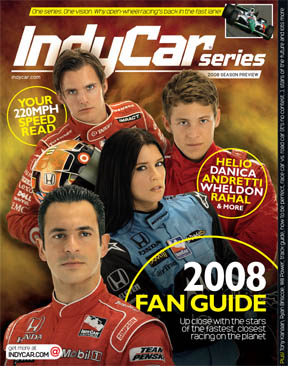 It’s a whole new game in the world of IndyCar Series racing, with the unification of open-wheel racing in the U.S. poised to makes this one of the most exciting seasons yet. There’s no better place to find out what to expect than the IndyCar Series magazine 2008 Fan Guide Digital Edition.

The digital edition brings all the exciting content of the print issue, but adds interactive features such as exclusive streaming video, photo galleries, quizzes and live links.

Readers can learn how new drivers to the series are going to mix it up with the veterans and how Tony Kanaan, Scott Dixon, Helio Castroneves, Danica Patrick, Graham Rahal, Will Power, Justin Wilson and Marco Andretti are all fighting for the same championship. They can read about what makes an IndyCar Series car one of the fastest machines on the planet, or how to do a perfect qualifying lap and make a pass at more than 220mph. Everything a fan needs to know about what’s happening in the IndyCar Series for 2008 is right here.

The best part is all this is free. Readers can subscribe to the digital edition of IndyCar Series magazine at absolutely no cost.

See the 2008 Fan Guide at www.indycarmag.com/digitalissue. There’s nothing better than free, except when you get extras such as being able to watch video of pre-season preparations, see Dan Wheldon discuss his teammate’s marriage, or catch Danica Patrick at the Sports Illustrated Swimsuit Issue launch party!