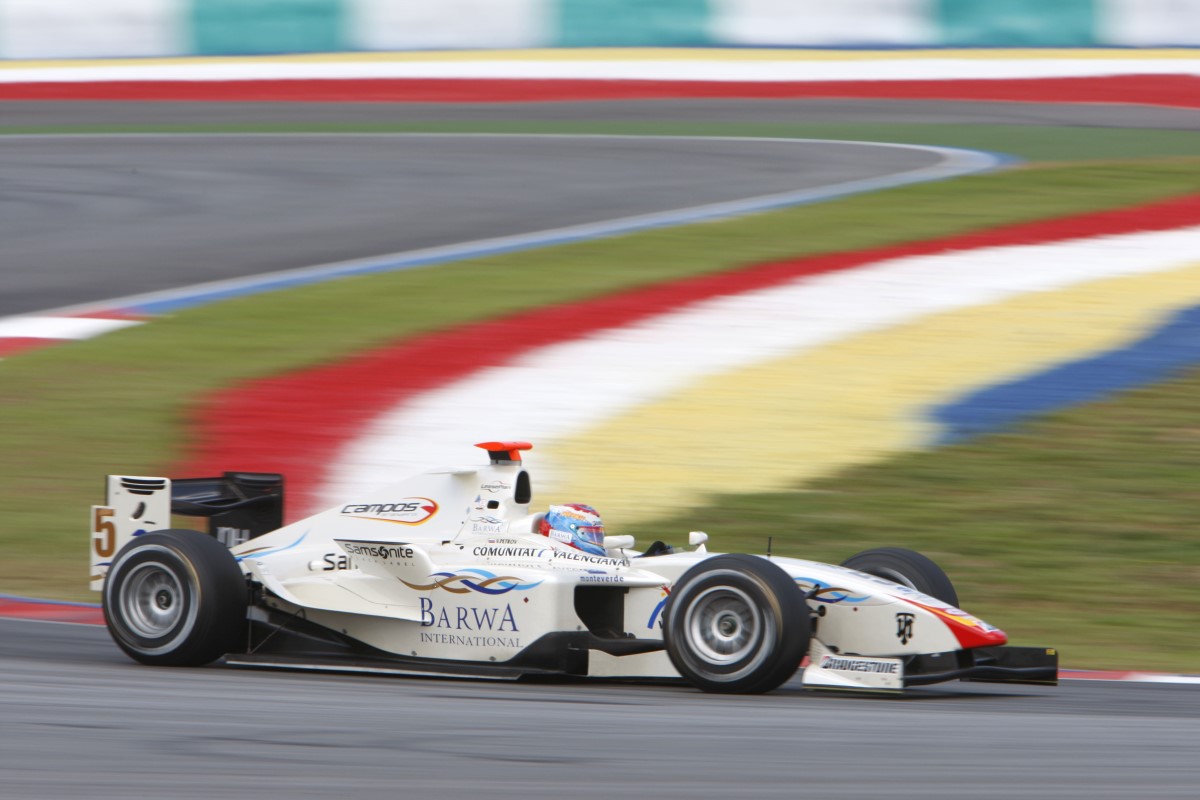 It was a difficult start for the front row men of the day as Karun Chandhok and Romain Grosjean both stalled on the grid and left Bruno Senna to lead the race in front of Adrian Valles and Sébastien Buemi. However, in the opening lap, the rain started to fall and the iSport driver went wide while chaos happened at the back of the pack with five cars going off track. The race was stopped.

At the restart behind the safety car, Adrian Valles took the lead in front of Sébastien Buemi. The two men pulled clear of the rest of the pack where Grosjean and Senna fought their way back to the top. The Brazilian pushed a little too hard though and after he signed the fastest lap time, he went off track and had to retire. Behind the two leaders, Fauzy, Tung and Petrov were fighting for third place. The Trident Racing driver eventually spun and Petrov started to attack Fauzy, but the Super Nova Racing man chose that moment to pit. While Grosjean made his way to eighth, the leaders also came back to the pits, Buemi one lap before Valles. The FMS man got back to the track just ahead of the Arden driver. The Swiss pushed really hard to try and overtake the Spaniard and unfortunately crashed into his rival. Both men had to retire and left Petrov and Grosjean to lead the race in front of BCN’s Pavlovic who, on hot tires, overtook the Frenchman, but the two cars touched in the process and Grosjean had to go back to the pits for inspection.

Petrov became a clear leader after Fairuz Fauzy was held up trying to lap Nunes. Dams’ JérÃ´me d’Ambrosio fought his way from 16th to third place ahead of Durango’s Valsecchi and the other Dams driver Kamui Kobayashi. The championship leader finished 9th, but still managed to salvage one point for fastest lap time. Behind Grosjean, the drivers’ championship has drastically changed with Fairuz Fauzy and Vitaly Petrov taking 2nd and 3rd. Bruno Senna and Adrian Valles dropped to fourth and fifth.

Vitaly Petrov (Barwa International Campos Team): “I made a start good enough to come out of the first lap in 6th place. At the restart, under the rain, it was tricky to stay on track. But I worked my way to the top corner after corner. It is fantastic to offer this win to my team. I want to take some points tomorrow and be able to fight for the championship."

Fairuz Fauzy (Super Nova Racing): “After Chandhok and Grosjean stalled on the grid and Senna went wide, I was P3. The track conditions were tricky. At the restart, I had a great fight with Buemi, but my tires were too hot so we decided to pit and change to slick tires. It took 3 laps to warm up the tires. I saw Vitaly in front of me and I could have caught him, but Nunes blocked me! This is my home race: I wanted to perform well."

JérÃ´me d’Ambrosio (Dams): “At the beginning of the race, when it started to rain, it was very difficult to stay on track. I adapted my driving to the track conditions and then my team had the perfect strategy and we had a great pit-stop during which I passed Pavlovic. When I went back out, I had three great laps. Then, it was impossible to catch up with the two leaders, especially since I had to contain Valsecchi! This is a great result for us with Kamui finishing 5th as well. As for tomorrow, I believe that the weather conditions are going to determine the results. I want to perform well, make no mistake and see where that leads us."