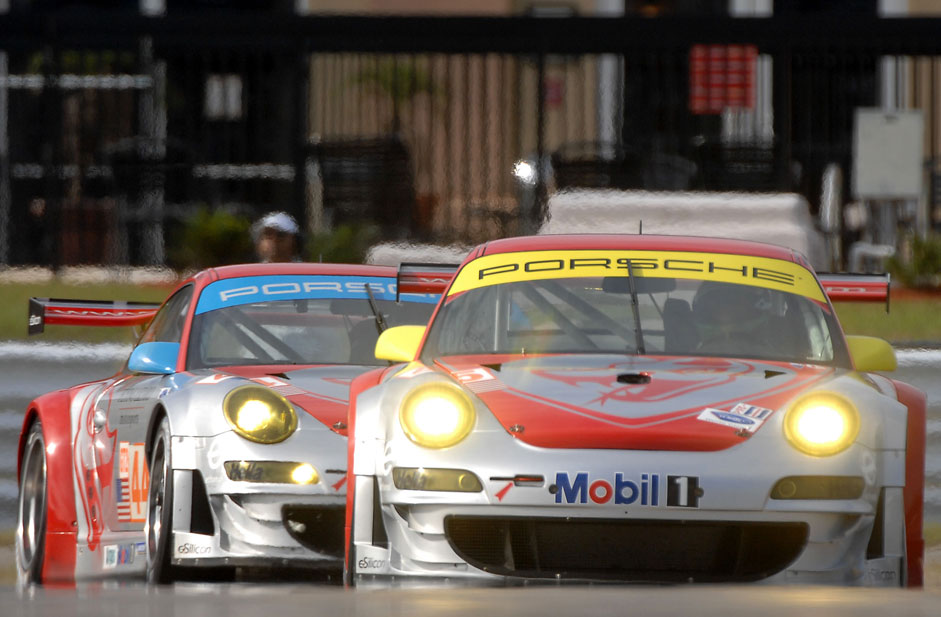 The previous two seasons, Flying Lizard Motorsports left Sebring International Raceway lamenting about what might have been. The team saw two consecutive runner-up GT2 finishes (including one by a race-record 0.202 seconds) as missed opportunities. After this year’s race however, there were no regrets, no questions and no doubts.

Flying Lizard captured the top two spots on the class podium in the 56th Mobil 1 Twelve Hours of Sebring presented by Fresh from Florida, a first for the squad in its four-year Series stint. The fact that it came in the 12 Hours made it even sweeter. JÃ¶rg Bergmeister, Wolf Henzler and Marc Lieb took a three-lap GT2 victory in the No. 45 Porsche 911 GT3 RSR. Having Seth Neiman, Darren Law and Alex Davison finish second in the No. 44 entry – three laps up on the third-place Ferrari – added icing to the cake.

“As far as the season goes it’s a very good start," team manager Eric Ingraham beamed. “But that’s all there is. It’s only the beginning. It’s only one race but we couldn’t be much happier. It’s the best finish we’ve ever had, the best finish at Sebring. It was a case of last-man standing, which typically it is at Sebring. The last couple of years that hasn’t been the case and we’ve been involved in them both."

It seems that the only blemish on the team’s day was the hard road for the No. 46 entry of Johannes van Overbeek, Patrick Pilet and Richard Lietz. In the race’s opening hour, it collided with one of the Audi R10 TDIs and damaged the Porsche’s suspension and rear axle.

Karma smiled on the team in the sixth hour when Risi Competizione’s Jaime Melo drove the Ferrari F430 GT through the hairpin and took out Dirk Werner in the Farnbacher Loles Racing Porsche. The two were running first and second in class at the time. Suddenly the No. 45 went from third in class to first by two laps over its sister car.

“We hate to see our competitors taken out and we’d prefer to race rather than just run around," Ingraham admitted. “But that’s what this race is about: attrition. It was a nerve-racking couple of hours for both the 44 and 45. We were running them easy and keeping them out there."

So the Lizards left Sebring with their second straight endurance race title in hand, having also won at Petit Le Mans in October. Not only that, the team holds the top two spots in the team standings. Yep, you read that right. Series rules dictate that a team can have a maximum of two cars entered for championship points. So the points table reads ‘Flying Lizard Motorsports – 30’ and ‘Flying Lizard Motorsports 44 – 26’.

“Sebring is such a tough week – but it's all worth it when you have results like we did today," said Neiman, also a team principal. “It was a shame that the No. 46 didn't get a chance to show its stuff, but even so, all three cars finished – that's no small achievement in this race. But now the hard work starts – we have 10 more races in the Series, Le Mans still to come and some extremely tough competition. It's going to be a fun year."