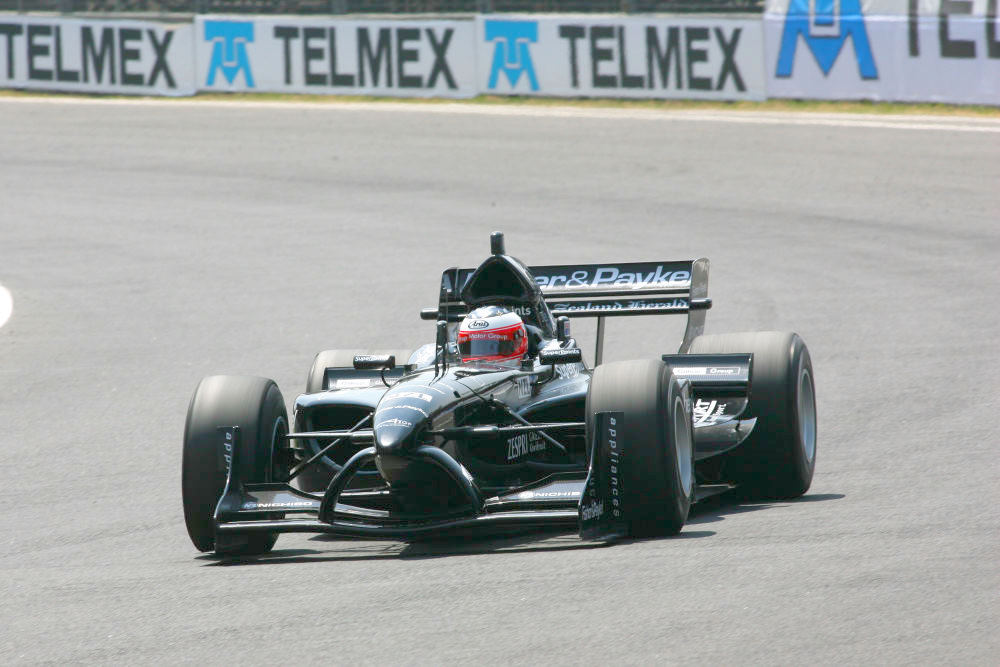 Mexico – A1 Team New Zealand raced to its third Sprint race victory of the season in this morning's incident-packed race at Mexico City's Autodromo Hermanos Rodriguez in perfect weather conditions, moving them up to second place in the championship. New Zealand held off Great Britain who crossed the line second to secure a superb podium finish while Switzerland took the final podium position, increasing its title lead as France failed to score any points.

The 22-car field was forced to reform on the grid for a second time after the scheduled start of the 20-minute race was red-flagged, as eight teams were involved in collisions at the rolling start and many sustained damage to their cars.

Once the debris had been cleared from the track, the race finally got underway and the pack jostled for position heading into turn one. Pole-sitter South Africa's Adrian Zaugg held the lead while GBR's Oliver Jarvis moved up two places to snatch third, slotting in behind New Zealand's Jonny Reid and just ahead of Switzerland's Neel Jani.

Reid started to hunt down Zaugg and by lap three 'Black Beauty' had taken control, snatching the race lead from Zaugg when he locked up and went straight on at turn one as a result of a slow puncture sustained at the start, putting the South African car out of the race.

A spinning Filip Salaquarda in the Czech Republic car at the final turn brought the safety car out on track on lap five, allowing the field to bunch up behind New Zealand. The action restarted on lap eight and Reid started to pull away from Jarvis in the British car, who was under pressure from Switzerland's Jani.

The Kiwi went on the win the race ahead of GBR's Jarvis in second, collecting crucial championship points and moving New Zealand to 15 points behind title leader Switzerland, who finished the race third.

China's Cong Fu Cheng, who collided with Malaysia's Alex Yoong on lap eight, picked up a bonus point for setting the fastest lap of the race.

All 22 nations are now preparing for the main event of the weekend in Mexico City, a 70-minute standing start Feature race with two compulsory pit stops, which starts at 15:00 this afternoon.

Sprint race winner New Zealand's Jonny Reid, who has his sights firmly set on the championship lead, reflected on the first start melee:

'It has been a very difficult couple of rounds especially in Durban, but that's motor racing and it's really good to bounce back here with a win and survive the carnage at the first start. Adrian accelerated and braked and accelerated and braked, then Neel almost ran into the back of me and I think Olly ran up the back of someone as well. So to clear the first corner I was much more relaxed and then I could start working on Adrian. I managed to be the last of the late brakers into turn one and over take him. Our focus is on the championship lead and we will do everything we can from P6 in the Feature race. It's ideally not where we deserve to start after the yellow flag in the last run in Qualifying but there are a few drivers in the same boat. You can still win the race from there that's for sure.'

GBR's Oliver Jarvis, who managed to hold off Switzerland's Neel Jani to take second, is targeting a Feature race win this afternoon in what will be his last outing for the British team this season:

'I'm not sure what happened with the powerboost, it happened in the first start. I only pressed the button once and then it used them all up so maybe a small problem but it meant I was under pressure from Neel. Fortunately I could get a bit of a gap in sector three, a bit of breathing space down the straight, but he did push me hard off the re-start. I'd love to go out with a win this afternoon. It would be fantastic for myself and also for the team. The team really needs solid finishes so if we can get a podium in the Feature race I'll be happy, but not as happy as I would be with a win.'

Title leader Neel Jani was satisfied with his third place finish for the Swiss team this morning:

'I think third was the maximum I could do today, I was struggling a little bit with the car, especially in the bumpy sections and I just went for third spot and I just wanted to secure that. I tried at the re-start to get Olly but it wasn't quite enough, but third place is ok for me.'