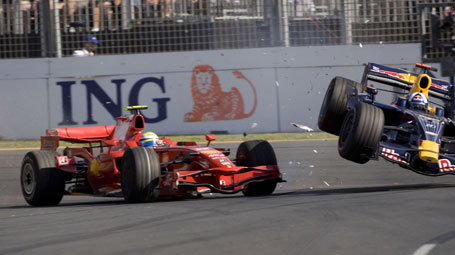 UPDATE A defiant Felipe Massa has insisted he will not be apologizing to David Coulthard after a coming together between the pair resulted in the Scot crashing out of the Australian Grand Prix.

Massa's Ferrari collided with Coulthard when the Brazilian tried to pass the Red Bull driver up the inside of Turn One, heavily damaging the 36-year-old's car and ending his race after just 26 laps and bringing out the second safety car of the afternoon.

An frustrated Coulthard afterwards blamed Massa, saying: "You've got to have your car alongside to pass someone, you can't just ram into them.

"I screwed up last year when I tried a move on Wurz but I took full responsibility for it and I would expect Felipe to do the same."

However, Massa hit back insisting he had every right to attempt the overtaking maneuver.

"He didn't see me. Next time ask him to watch in the mirrors because I was completely inside. I'm definitely not going to speak to him."

03/16/08 (GMM) A menacing David Coulthard turned the airwaves blue on Sunday after colliding with Felipe Massa in the Australian grand prix.

Plenty of carbon fiber was shed throughout the field at Albert Park as the 2008 season kicked off, but Red Bull's Coulthard was clearly the most furious of the retirees as the media scrambled for live comments.

To a reporter for British TV, Coulthard demanded that Massa take full responsibility for the crash after they came together at turn one.

"If he doesn't, then I'm gonna kick three colors of shit out of the little bastard," he slammed.

But Massa, the Brazilian driver, risked incurring the Scotsman's wrath by refusing to apologize.

"He should just go and watch the television instead," the 26-year-old said.

"I was on the inside, I did nothing wrong," he told reporters.

Ferrari boss Stefano Domenicali did not want to wade into the argument, but he pointed out that "race control didn't take any action".