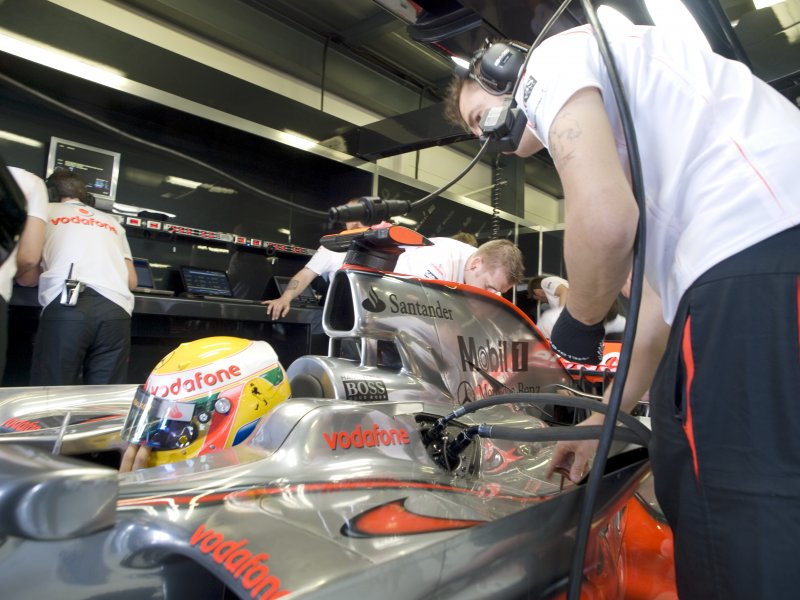 Lewis Hamilton will be the first grand prix driver to start a race from pole position with Bridgestone as Formula One’s Official Tire Supplier after using the soft compound Potenza tire to set a time of 1min 26.714secs at Albert Park for this weekend’s ING Australian Grand Prix.

Hamilton, who also set the day’s fastest lap, in Q2, beat Robert Kubica to first place on the grid for tomorrow’s race by just over a tenth of a second. Heikki Kovalainen and Felipe Massa make up the second row tomorrow, with Kovalainen the faster.

Illustrating the close nature of competition in Melbourne, there were seven teams inside the top ten. Notable exceptions were reigning world champion Kimi Raikkonen who had a mechanical problem which prevented him from progressing to Q2.

Qualifying was interrupted by a red flag period in Q2 after Mark Webber spun into the gravel with just under nine minutes of the session remaining. Earlier in the day Kubica was fastest in the final frantic moments of the morning’s practice session with a 1min 25.613secs time, over three tenths quicker than team-mate Nick Heidfeld, who was second quickest.

Temperatures were cooler than on Friday but still glorious with blue skies.

An important change from last season is that Q3 competitors are not able to refuel their cars before tomorrow’s race, meaning teams have modified their strategies from those used last year.

“Congratulations to Lewis Hamilton on the first pole position of 2008. Today was an interesting day, especially with the revised qualifying format, meaning that Q1 was busy and tough competition," said Hirohide Hamashima – Director of Bridgestone Motorsport Tire Development. “Pole was set using the soft compound Bridgestone Potenza and we saw strong performance from this tire, with less graining than yesterday."

“The medium compound worked well today too, so there are many strategic opportunities for competitors in tomorrow’s race. As drivers have different fuel loads and some have qualified outside where they might have expected, strategy will be key, so the teams will have a lot to think about to prepare for the race. Assuming the track conditions improve, we should see lap times continue to drop tomorrow."