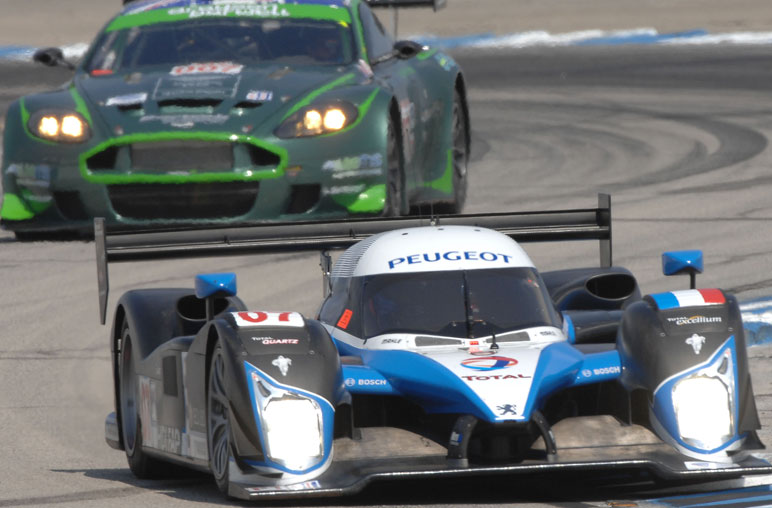 Pedro Lamy kept Peugeot at the top of the timing sheets at Sebring International Raceway on Tuesday in the final test session for the 56th Mobil 1 Twelve Hours of Sebring presented by Fresh from Florida. Lamy’s time of 1:43.710 (128.435 mph) was the best in the field by 0.725 seconds with official practice sessions starting Wednesday.

The Peugeot 908 is racing in North America for the first time with Lamy, Nic Minassian and Stephane Sarrazin doing the honors. Saturday’s 12-hour season opener for the American Le Mans Series will serve as a diesel duel between Peugeot and Audi, which has won at Sebring every year since 2000 including the last two seasons with its diesel-powered Audi R10 TDI.

But it’s not just a two-car race. Marco Andretti made sure of that with a best lap of 1:44.435 (127.543 mph) that was fastest in LMP2 and second overall. Andretti will make his Series debut in the Acura ARX-01b for Andretti Green Racing, which won in class last year in its maiden American Le Mans Series race. Andretti, the grandson of three-time Sebring overall winner Mario Andretti, was 0.279 seconds better than the first Audi of Marco Werner. He will drive the No. 2 R10 TDI with Lucas Luhr and Mike Rockenfeller.

Next was the second-place LMP2 car, the Acura of Lowe’s Fernandez Racing. Adrian Fernandez’s time in the car he will share with Luis Diaz was 1:45.549 (126.197 mph), good enough for a 0.6-second cushion over Dindo Capello in the second Audi he will drive with Allan McNish and Tom Kristensen.

Jaime Melo kept Risi Competizione on top in GT2 with a time of 2:02.535 (108.704 mph) in the team’s No. 62 Ferrari F430 GT. Melo and Mika Salo will team with Gianmaria Bruni in an effort to repeat as class winners at the 12 Hours. Last year Melo, Salo and Johnny Mowlem won by 0.202 seconds for the closest finish in race history.

Flying Lizard Motorsports, the team Risi beat the checkered flag in 2007, was second quickest in class Tuesday. The team’s No. 45 Porsche 911 GT3 RSR of JÃ¶rg Bergmeister, Wolf Henzler and Marc Lieb were just 0.283 seconds behind the Ferrari. Farnbacher Loles Racing’s Porsche of Dirk Werner, Marc Basseng and Bryce Miller was third in class at 2:02.829 (108.443 mph).

The 2008 American Le Mans Series season opens with the 56th Mobil 1 Twelve Hours of Sebring presented by Fresh from Florida on Saturday, March 15. The race will start at 10 a.m. ET and will be broadcast live by SPEED, which will begin its coverage at 9:30 a.m. MotorsTV, SPEED Latin America and Greenlight Television will provide international coverage as well. American Le Mans Radio and IMSA’s Live Timing & Scoring will be available at americanlemans.com.

Dindo Capello, Audi Sport North America
Audi R10 TDI (LMP1)
“With Peugeot in the race we are now getting back to the great days of sports car racing. It will be a great battle with the top-line manufacturers again. This race and this track put great stress on the car, the tires, the team and the drivers. Driving Sebring is much more demanding on all concerned and it's a perfect way to test all factors of the car and the team prior to Le Mans."

Marco Andretti, Andretti Green Racing
Acura ARX-01b (LMP2)
“We still have some work to do. But the car has great balance and a ton of downforce. I ran several laps flat-out through Turn 1. This is most enjoyable car you could have at this track. You just have loads of downforce. I wouldn’t want any other car, which is exactly what you want at this race."

(Racing where grandfather Mario won four times overall) “Obviously this track has a lot of history with my grandfather. Every place he did well, you want to do well too."

Dirk MÃ¼ller, Tafel Racing
Ferrari F430 GT (GT2)
“The last time I was here was 2001, and I have not so good memories. I drove the BMW M3, and not the new GTR. It had the six-cylinder engine and it wasn’t a good weekend. But we did finish the race. Although Turn 17 and Turn 1 are very bumpy, the Ferrari is very solid through there. The weight distribution of the car is nearly 50-50. The shocks and dampers are very good too."

Tom Milner, Panoz Team PTG
Panoz Esperante GTLM (GT2)
(Comparing the Panoz to last year’s Porsche 911 GT3 RSR): “After about 10 laps, you don’t really know the difference (front-engined Panoz and rear-engined Porsche). It just takes a little time to adjust, like anything else. You can be more aggressive in the Panoz and can recover from anything big as well."

Marino Franchitti, Dyson Racing
Porsche RS Spyder (LMP2)
“For me, the Winter Test was about learning the car and the team. This really is a great group of guys and I’m glad to be with them. Anytime you start with a clean sheet of paper, you can make the car your own. But the Porsche program has been so well developed. You can see the lineage between the prototype and the 911."