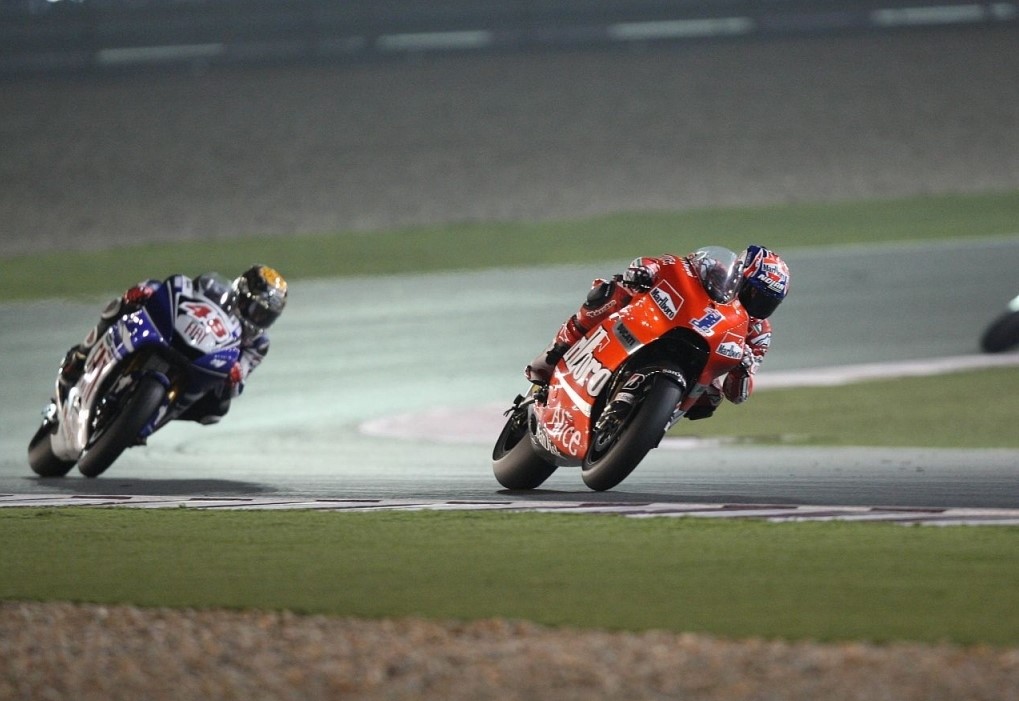 2007 MotoGP World Champion Casey Stoner began his title defense in style with victory in the Commercialbank Grand Prix of Qatar –the first ever MotoGP night race- ahead of Spaniards Jorge Lorenzo and Dani Pedrosa.

“That was a fantastic race and I really enjoyed it – it was like being back in 125s!" said the Australian. “The first few laps were really hectic, there were guys bashing fairings and I just tried to stay out of the way. When I got my chance to get through I took it and from there I just focused on setting my pace."

“Jorge rode brilliantly – it wasn’t an easy race by any means, especially at the start. Over the first few laps I was struggling a bit for grip but then the tires got up to temperature and improved. We knew we had a pretty good package for the race but obviously we couldn’t be sure that things would go as well as that."

The Ducati Marlboro rider started the race off the front row for the first time in his MotoGP career, chasing a repeat of his debut premier class victory from last year. Stoner didn’t have things all his way in the early going, but held off challenges from some of the favorites for the 2008 crown to win by over five seconds from Lorenzo.

Behind the Australian, Fiat Yamaha rider and reigning 250cc World Champion Lorenzo followed up on his spectacular Saturday pole with a jaw-dropping debut MotoGP race. The Spaniard showed no fear in the face of a field packed with race-winners, joining Stoner in breaking away from the pack to take a maiden podium at his very first attempt.

Another rider to step onto the rostrum in his first MotoGP race was Repsol Honda rider Pedrosa, who for the third consecutive year finished in the top three at the opening race of the year. The 2007 World Championship runner-up had to work for his reward, however, taking the hole-shot from the third row of the grid and getting some rough treatment by the frontrunners in their attempts to break away.

JiR Team Scot rider Andrea Dovizioso joined eternal adversary Lorenzo in making a fantastic 800cc debut, taking fourth place from five-time MotoGP World Champion Valentino Rossi on the final lap of the race. The former 250cc star picked off his fellow Italian after Rossi had dropped out of the running for third, both finishing just ahead of Tech 3 Yamaha’s front row duo of James Toseland and Colin Edwards in the former’s first Grand Prix.

Chris Vermeulen was forced to return to the pits for a tire change counting him out of the running for points, whilst the final debutant in the class Alex de Angelis, crashed out with five laps remaining. MotoGP-World.com