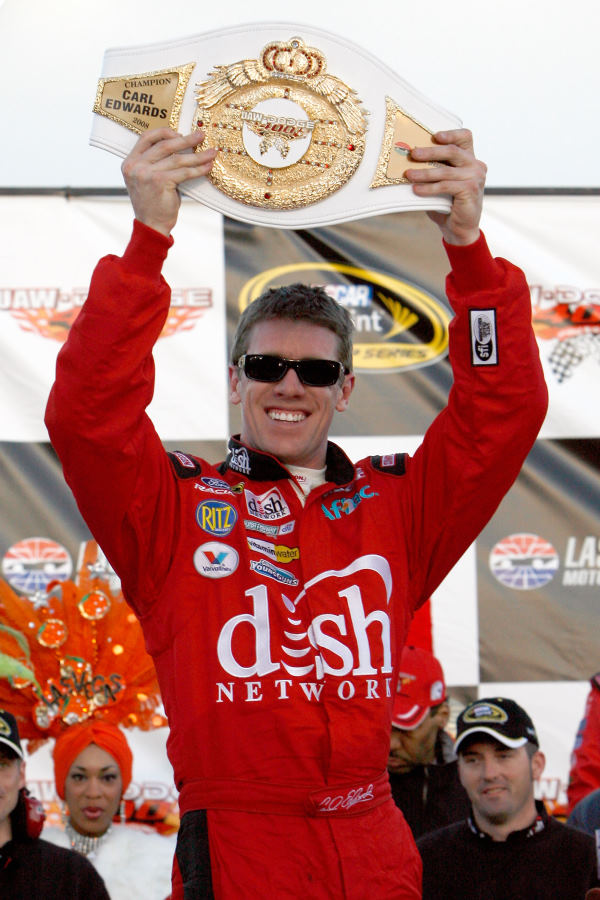 NASCAR giveth and then NASCAR taketh away.

Everything that is … except a victory.

Carl Edwards got a gift win in Las Vegas last week when rather than being penalized for a loose wheel during a crucial pit stop, NASCAR was in a benevolent mood.

Because one of Edwards' crew members was obstructed by a cameraman in the No. 99 pit box, NASCAR ruled no penalty for the errant tire that rolled away during the stop.

Such an occurrence usually is grounds for a one lap penalty, which would have taken Edwards out of contention for what turned out to be his second straight series win.

"I thought we were going to receive another penalty," said Edwards, who earlier in the race was sent to the rear of the field for another pit road miscue. "But NASCAR made a judgment call in our favor that I believe was the right one. I'm very grateful for them giving that to us."

But the situation became even more compounded following the race when Edwards did not pass post-race inspection. The oil reservoir lid was off on the No. 99 Ford.

The opening could create an aerodynamic advantage for the car by allowing it to vent air, providing downforce and reducing drag. Simply put, it's cheating.

As is its custom, NASCAR took the car back to its R&D Center in Concord, N.C., for further determination and late Wednesday the sanctioning body hammered Edwards, Osborne and team owner Jack Roush. Edwards was hit with a 100-point penalty and $100,000 fine while Osborne received a six-race suspension.

Those sanctions are at least consistent with what NASCAR has followed since the Car of Tomorrow was put into play. Dale Earnhardt Jr., Jeff Gordon, Jimmie Johnson and now Edwards have all suffered the same fate when infractions were found on the new car.

But despite the fact his car was found to be illegal, Edwards will keep the Las Vegas win, as has been NASCAR's policy over the years.

Despite driving a car that didn't meet NASCAR's standards, Edwards will still have his name in the record book as a Sprint Cup winner and can keep the trophy that was bestowed upon him last Sunday.

That makes no sense.

If a car is not legal, how can it win a race?

In the world of NASCAR, it's possible.

But it's impossible to understand. Sportsline.com