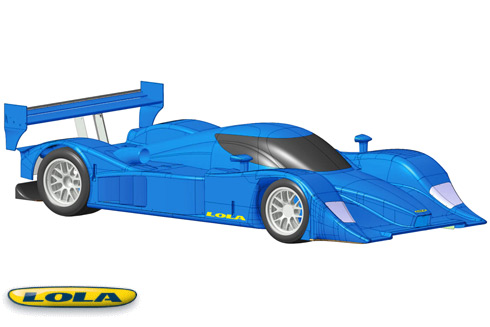 Lola Le Mans Prototype sportscars were in action at the LMS Paul Ricard test in the South of France on Sunday and Monday of this week (2&3 March). All eyes were firmly fixed on Lola's all-new LMP1 and LMP2 Coupes, which included a track debut for the Speedy Racing Team Sebah Lola LMP2 entry. The Hugh Hayden led Speedy Sebah team enjoyed a good initial shakedown test in the South of France with Andrea Belicchi, Xavier Pompidou, Robbie Kerr and Steve Zacchia all driving the Judd powered Lola.

This was the very first LMP2 Coupe to hit the racetrack and despite the car build having only been completed late last week the Lola B08/80 impressed Belicchi, who said: "The Lola was very easy to drive, there's a lot of assistance for the driver and the downforce is beautiful. My first feeling is that it's a very nice car." The Speedy Sebah team are set to name their driver line up in the coming weeks and will undertake a more detailed test at Magny Cours shortly.

The LMP2 Coupe's bigger brother, the Lola B08/60 LMP1 powered by an Aston Martin engine completed more useful laps at Paul Ricard in the hands of the Charouz Racing System team, who set the fifth fastest time of the test despite not going for an out and out quick time. Stefan Mucke was delighted with the way the team's test went and commented: "I like the car more and more. It was considerably better on all sides compared to the recent Snetterton test. Additionally, we took a further step forward here in Le Castellet. Our lap times are not important. The main thing is thorough preparation for the races."