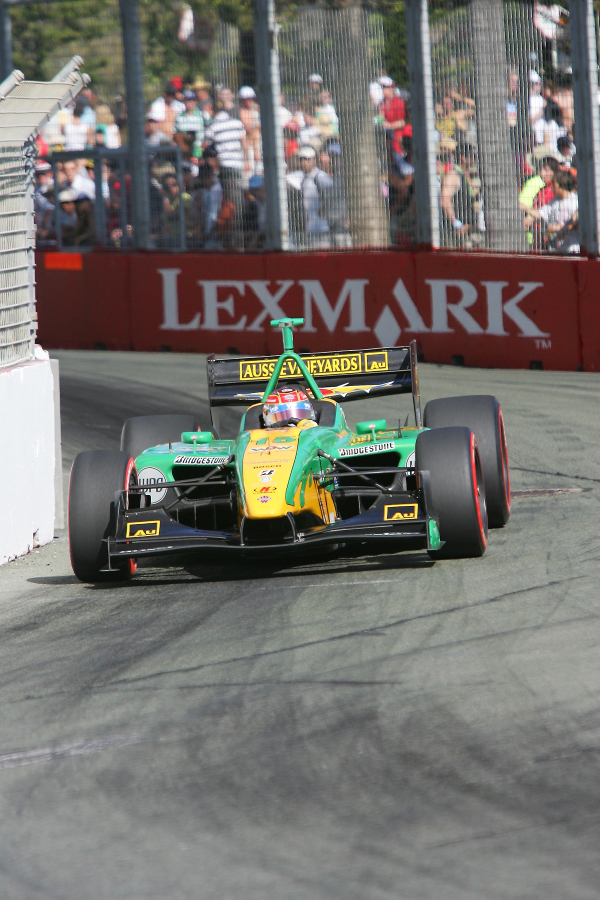 The future of the Gold Coast Indy 300 has been secured for at least another six years with a deal being reached with the Indy Racing League’s new-look IndyCar Series and V8 Supercars Australia.

Queensland Minister for Police, Corrective Services and Sport, Judy Spence, made the announcement today after a visit to Indianapolis this week by event Chairman Terry Mackenroth and General Manager Greg Hooton.

The final piece of the puzzle, which will continue to give V8 Supercars equal billing with the IndyCar Series at the October event, was put in place after positive discussions with V8 Supercars chairman Tony Cochrane this week.

Now regarded as one of the world’s iconic motorsport events, the Gold Coast Indy 300 is now secure until and including 2013 with major plans already underway for a massive 20th anniversary celebration in 2010.

A decision to end an open-wheel split between the Indy Racing League and Champ Car last week was applauded as a significant day in world motorsport history.

The final schedule for the IndyCar Series and where the Gold Coast race fits within it is still to be determined.

The final 2008 IndyCar Series schedule, including details on how the race will fit in a championship format, still need to be worked through and then ratified by the sport’s world controlling body the FIA.

The IndyCar Series will be revising its previously announced 16-race schedule, to include some former Champ Car venues, including Australia, in the immediate future.

This year’s Gold Coast event will be attended by a full contingent of cars and drivers set to number a healthy 22-26 entries.

“The Gold Coast Indy 300 has been a part of the Queensland Major Event landscape for 18 years and I am delighted that it will continue to showcase Queensland for many years to come," said Spence.

“The event has overcome many hurdles in its history, but this latest development probably puts it in its best shape ever.

“It is estimated that the event returns $60 million in economic benefits to the State of Queensland and I am sure that figure will continue to grow as the new-look IndyCar Series and the V8 Supercars continue to attract more national and international attention.

“It will also be fantastic to see two talented young Australian drivers the likes of Will Power and Ryan Briscoe racing wheel to wheel on the streets of Surfers Paradise, while the V8 Supercars will continue to bring out the passion for Ford and Holden."

Today’s announcement is a reward for so many people who have made the Gold Coast Indy 300 an event of international significance, according to Mackenroth.

“We are proud of what we have achieved with the Gold Coast Indy 300 in its first 17 years and I think the unification of open-wheel racing in the US provides an exciting new era for our event," said Mackenroth.

“Tony George and his team at the IRL welcomed our involvement with tremendous enthusiasm and see the Gold Coast Indy 300 as one of their signature events going forward.

“I also have to thank Tony Cochrane and V8 Supercars Australia for their enthusiasm to get this long-term deal in place and remaining an important part of our event.

“The new-look IndyCar Series field combined with the V8 Supercars and an always exciting off-track program means that we are shaping up for a memorable event in 2008 and beyond."

“The Gold Coast Indy 300 has become one of the world’s truly great motorsport events and we are delighted that it will be part of the IndyCar Series schedule," said George.

“I know so many of our teams and drivers, who have been to the event previously hold it in high regard and we are delighted that it will be one of the highlights of the IndyCar season."

The Surfers Paradise event became a part of the V8 Supercar Championship Series six years ago and will be round 11 of the 14-round series this year.

“The Gold Coast has really become the home of V8 Supercars with our head office here and so many teams located within a short distance from our front doors," said Cochrane.

“V8 Supercars is the leading touring car championship in the world and we are happy to be sharing equal billing with the new IndyCar Series at a world class event."

IMG Senior Vice President and Managing Director Asia Pacific, Martin Jolly, added the news that today’s announcement also cements the joint-management partnership of the event between IMG and the Queensland Government for the length of the new agreement.

“We have enjoyed a fantastic working relationship with the Queensland Government for many years and together we have developed one of the world’s great sporting events," said Jolly.

“I think this is the dawn of an exciting new era for open-wheel racing and the Gold Coast Indy 300 in particular.

“We look forward to producing the best event and the best result possible for Queensland during the next six exciting years."

The new-look event is expected to provide new corporate opportunities with companies now able to make confident, long-term commitments, according to Greg Hooton.

“The great thing about the commitment from the IRL and V8 Supercars is the stability it provides and that is one of the greatest assets any event can have," said Hooton.

“We can now seriously go into the market place and offer partnerships of up to six years.

“I think such a commitment will also breed a whole new group of fans who will be able to get behind young Australian drivers like Will (Power) and Ryan (Briscoe) as they continue to forge careers for themselves. At the same time they will be able to continue their loyalty to their favorite Ford or Holden V8 Supercar drivers."

Tickets for this year’s event are available through www.indy.com.au

SUMMARY
â€¢ The Gold Coast Indy 300 is secure until and including 2013
â€¢ The new-look IndyCar Series will involve at least two Australian drivers with Will Power driving for Team Australia and Ryan Briscoe continuing with Team Penske.
â€¢ The Gold Coast Indy 300 will celebrate an amazing 20th anniversary in 2010
â€¢ This year’s race will involve a full contingent of 22 to 26 cars.
â€¢ The V8 Supercars will have their seventh start for championship points at this year’s event.
â€¢ The new arrangement allows for confident, long-term commitments from corporate partners and increased media exposure and publicity.
â€¢ This year’s event will see the return of some great open-wheel names like Rahal and Andretti to the streets of Surfers Paradise. Marco Andretti and Graham Rahal are the sons of former IndyCar Champions Michael Andretti and Bobby Rahal.