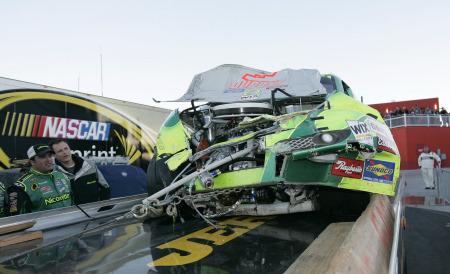 Gordon's spinning Chevrolet went headfirst into the wall for the "hardest I've ever hit" after contact with Matt Kenseth. Gordon was upset the wall didn't have the SAFER Barrier that is pretty much standard on the outside walls.

"That kind of hit shouldn't happen," Gordon said. "There is no reason why any track we go to should have that. I could have been really hurt bad."

Gordon anticipated being "really sore" on Monday when he reports to Phoenix International Raceway for two days of open testing. The hit destroyed his car and tore the transmission out from under the hood.

"It took me awhile to be able to catch my breath and to get out," he said. "I'm thankful that I've got an awesome team … because they build a safe race car. Several years ago, those types of hits, you wouldn't be standing here right now." SI.com