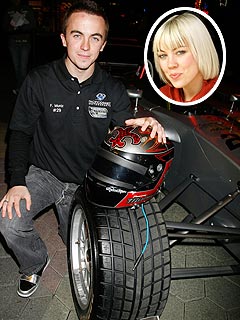 It appears Frankie Muniz isn't quite over his ex-fiancée Jamie Gandy. The actor (who recently ran into her at West Hollywood nightclub Hyde), poured his heart out to PEOPLE Wednesday at a press conference to talk about his new job as a driver for 2008 Pacific Coast Motor Sports team.

But when talk moved to romance, Muniz, 22, explained: "I am not engaged anymore. I'm still with her … kinda."

"It's a very awkward situation," he adds. "But we're best, best, best friends. And if there was anyone in the world that I wanted to be with, it'd be her. With the racing, it's very difficult, the traveling around."

Muniz, who appeared at the Hard Rock Café in Universal City for Wednesday's press conference, is in his third year as a professional racecar driver, and second year with the team. But what does he think of his fellow celebrity racecar drivers?

"I don't want to sound conceited, but I don't think there has been an actor or celebrity-turned-racecar driver that has made it as high up on the racecar circuit as I have," he says. "So I don't think there's anyone who can keep up with me. And that's just me being honest.

"I want to race Michael Schumacher, seven-time world champion. And I can compete with him." People Magazine