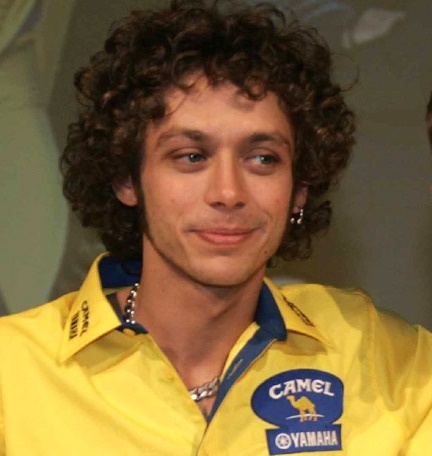 Q. Valentino, firstly can you tell us how your hand is following your injury in Valencia?

Valentino Rossi: It's much better than it was! I took some time off after Valencia and missed the Sepang test, but in Jerez at the end of November I was able to ride. It still wasn't perfect and I had some pain, especially on the last day when I finished early so as not to overdo it, but it was okay. After some more treatment over Christmas I think I will be back to 100% for the first test of 2008.

Q. After the disappointing end to the season, were you able to take some time to relax completely and fully recover before starting afresh?

VR: Yes, it was important to take some time to put the bad result of 2007 behind me and of course I thought about the year a lot. But after spending the winter relaxing and recharging the batteries, I am no longer dwelling on it and now I am just looking forward to the new season.

Q. You have a made a big change to Bridgestone tires for this season. Can you tell us about your initial impressions of your new tires and their development so far? Are you happy with your decision?

VR: It was very exciting to try the new tires for the first time, and I was eager to see how they were and to meet the new people I will be working with. The first test was just about seeing the level and adjusting the bike to the new tires, but from the start I was happy with our decision and I am looking forward to working more with Bridgestone and understanding more about their tires. It's a big change, but I am positive about the challenge.

Q. You have had some experience riding the new 2008 prototype M1. Are you happy with it so far?

VR: We introduced a few pieces of the new bike during the end of season, such as a new cowling, some suspension setting, and others. Let's say that in Jerez I rode the latest spec, including some new electronic mapping, and my first impressions were quite positive, although of course we still have a long way to go.

I was able to give my feedback to Yamaha and over the winter they will have been using my data, and the data of the other Yamaha riders, to develop the bike further. From the first test in January we will begin to work exclusively on the latest new bike and I am looking forward to this.

Q. What specific areas do you need to concentrate on improving before the first race in Qatar?

Luckily we have four tests before the first race and I am confident that we will be in good shape at the start of the season. Motivation is high and everyone is working at 100%.

Q. Are you looking forward to the night race in Qatar? As a member of the safety commission, are you happy with how they've prepared the circuit for this event?

VR: I'm honestly quite excited about this event, I think it's a fun way to start the season; fun for the fans and something different for the riders! Last year we, the safety commission, made a test on a small part of the track with road bikes and gave our feedback to the circuit about the changes they needed to make before a race could go ahead.

Our main worry was the shadow – it needs to be very, very bright in order for the shadows not to be a problem. I wasn't able to go to the test there in November because of my hand but it seems that the circuit have made a very good job. It will be strange for sure but I think it will be very funny.

Q. What is your aim for this season?

VR: My aim is to win, just like every other year. I haven't won now for two year, the longest period of my Grand Prix career, and I am aiming to win this year.

Q. Do you expect Stoner to be your chief rival again? Which other riders are you expecting to be strong?

VR: Without a doubt I expect Stoner to be as strong, or stronger than last year, and I know we will have to make a great, great fight to beat him. This year I will be on the same tires as him and I am looking forward to having some great battles with him.

Pedrosa of course will also be at the front again as well as many of the others Quite a lot of riders have changed bikes this year and I think it will be very interesting but I am expecting everyone to be competitive from the start; Melandri, Hopkins, Capirossi, Vermeulen etc. I think it will be a very exciting season.

Q. What do you think about your new teammate, Jorge Lorenzo?

VR: He is a great 250cc rider and I am sure that he will be a very good MotoGP rider. Already after just a few tests he has shown a great level of improvement and he is undoubtedly fast. I am sure he will be a good rival in the future.

Q. The tire regulations have been slightly altered this season. Do you think it's enough or would you like to see the limitations removed entirely?

VR: I'm not too concerned about the tire regulations. We're accustomed to the situation now and although I think it's good that it's changed slightly, I don't think it will make much difference. I am starting afresh with regards to tires and I am not thinking about the limitations, just on developing my new relationship with Bridgestone.

Q. Did you take part in any other racing activities during the winter, such as rally driving?

VR: I had planned to compete in the Rally of Great Britain but in the end I was testing in Jerez the new Bridgestones, which was of course more important! As usual I did the rally of Monza which I won for the second time in a row! It is always great fun for me to compete in that race and a win is always great!

Q. Finally, after two years without a championship, do you think the motivation for you and for the team stronger than ever?

VR: We have a new and difficult challenge in front of us, which is to win after two years, but with new tires. It's all very exciting and the motivation for me is greater than ever and for the team it's the same; I know that all my guys are as hungry to win again as I am. Fiat Yamaha PR