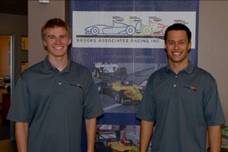 Brooks Associates Racing is proud to announce its driver lineup for the 2008 Cooper Tires Presents The Champ Car Atlantic Championship Powered by Mazda, with both drivers secured and ready to test.

Filip Salaquarda (pictured right) comes to the U.S. for the first time from the Czech Republic. Filip began his racing career winning championships, starting with the Comer category in Czech go-karts, then progressed to ICA 100, winning that championship before the age of 15. Moving into driving cars, he progressed to the Ford Puma Cup, Formula BMW, then Formula 3, competing in the Formula 3 Euroseries in 2007, with two top five finishes. He also represented his country in the A1GP series, finishing 10th at Shanghai.

Markus Niemela (pictured left) also ventures to the U.S. for his first entry into U.S. competition, leaving behind his home of Finland. Markus began his driving career in karts, winning the Junior Championship as a young driver. His achievements include victories in England, Germany, Scandinavia, Belgium, Finland and Sweden in both karting and formula racing. In 2007, Markus joined the GP2 series in mid-season, running well with BCN Competition.

The two will partner with BAR’s engineers, Nick Harvey and Yancy Diotalevi, and the rest of the team for an exciting 2008 season. “Markus and Filip fit right into our team and I’m really looking forward to 2008. We’re changing any number of things, and having two quality drivers signed early, with plenty of time to test and work together promises a good season for all my guys." said team owner, John Brooks.

In slightly more than two weeks, the team heads for Florida for its first round of 2008 tests before returning to its Tucson, Ariz. base.