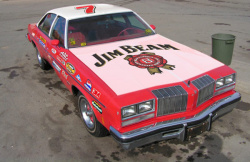 CHARLOTTE, NC—Only days after its long-anticipated, much-criticized Car of Tomorrow debuted to overwhelmingly negative reviews at the Bristol Motor Speedway, NASCAR responded to the wishes of competitors and fans alike by introducing the stylishly retro, technologically retrograde NEXTEL Cup Car of Yesterday.

"This is exactly what everyone from race teams to race fans wanted all along—a real American racecar," said Robby Gordon, standing in front of the Jim Beam '77 Oldsmobile Cutlass Supreme he will drive for the rest of the season. "To hell with things like spoilers, adjustable suspensions, disc brakes, shoulder belts, all that junk. People want to see us racing the cars they drive every day, and anyone who's seen the parking lot at a NASCAR race will tell you that's what the Car of Yesterday gives them."

Based on tried-and-true NASCAR designs from what many consider the golden age of stock-car racing, the Car Of Yesterday is based on the racing team's choice of four-door body styles: either the '77 Cutlass Supreme, the '79 Chevrolet Caprice Classic, the '78 Dodge Diplomat, the '77 Ford Granada, the '77 Mercury Gran Marquis, or for series newcomers Toyota, the 1989 Corolla. All cars, regardless of body style, must have fully reclining seats, column shifters, vinyl tops, ashtrays, and automatically retracting seatbelts. Adding spoilers and air dams for purposes other than providing advertising space is forbidden, although teams will be allowed to bolt wooden 2-by-8 planks to their front and rear bumpers for the contact-heavy short-track races. Mechanically, all cars will be basically identical, featuring 360-cubic-inch V-8 engines with the air filters reversed, "glass-pack" mufflers, and factory power steering.

"Our primary concern with the Car of Yesterday was safety," said NASCAR competition director Robin Pemberton. "The fans hate that shit. We had to keep that in mind when we went back to the drawing board, so we took away anything that increased grip, improved handling, or prevented a stock car from experiencing a sudden and total loss of control. NASCAR isn't about the cars, it's about the drivers. And the Car of Yesterday keeps the driver involved with the vehicle, whether he's just driving it or, ideally, crashing it."

"I could barely keep the thing out of the wall. It swapped ends, got way loose, and nearly spun out with little to no warning. Sometimes it dove down towards the infield for no reason I ever did figure out, and once coming off the banking at Daytona it rebounded off the suspension stops hard enough to bounce the whole front end in the air," said Bodine, who was pronounced healthy and released from Daytona Beach Memorial Hospital early Wednesday afternoon. "It may be the best all-around NASCAR stocker I've ever driven. I wish they had these cars when I was still racing, but unfortunately, they'd advanced past that point by then." More at The Onion