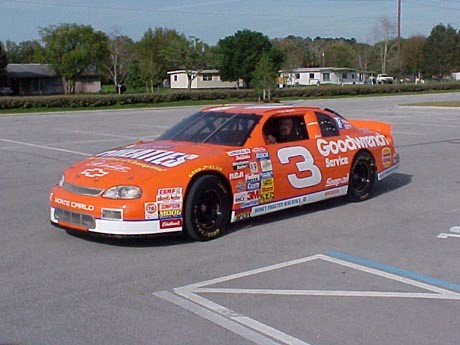 One race-car fan will have a dream fulfilled in February, when he or she wins a car that once belonged to legendary driver Dale Earnhardt. The orange No. 3 car, a Chevrolet Monte Carlo painted with the Wheaties logo, is part of a NASCAR exhibition at Orlando Science Center. Come February it will be sitting in some lucky ticket holder's garage, after it is raffled off. Edgewood Children's Ranch and the Make-a-Wish Foundation, Central and Northern Florida chapter, have teamed up to raffle off this one-of-a-kind race car to benefit their charitable organizations. Dale Earnhardt Sr. was killed in a crash on the last lap of the Daytona 500 on Feb. 18, 2001.

Earnhardt, known as the "Intimidator," drove the car in five races between 1993 and 1995. The car was later moved to the show-car division. In 1997, Richard Childress Racing converted two cars from Earnhardt's black paint scheme to the Wheaties trademark bright orange in order to promote the Winston Select Race in Charlotte, N.C.

After the race, one car was returned to the original paint scheme while the other retained the Wheaties colors. In 2001, Richard Childress Racing sold the Wheaties car.

"Mike Tuminello, a private collector in DeLand, bought the car for $60,000 and donated it last April to be auctioned off to benefit the two charities," said Mark Hess, a board member of Edgewood Children's Ranch and raffle co-chairman with Mark Bender of the Make-a-Wish Foundation.

"It is on display in the lobby of the Orlando Science Center during its Daytona 500 exhibit, which ends Jan. 6. After that it will go to Gainesville to be displayed in the Brasington Cadillac dealership," he said.

Raffle tickets are $20, payable to either charity. They may be purchased online at (windalescar.com) up to 4 p.m. Feb. 23.

The drawing will be in Old Town in Kissimmee at 5 p.m. the same day. Ticket holders do not need to be present to win.(orlandosentinel.com)