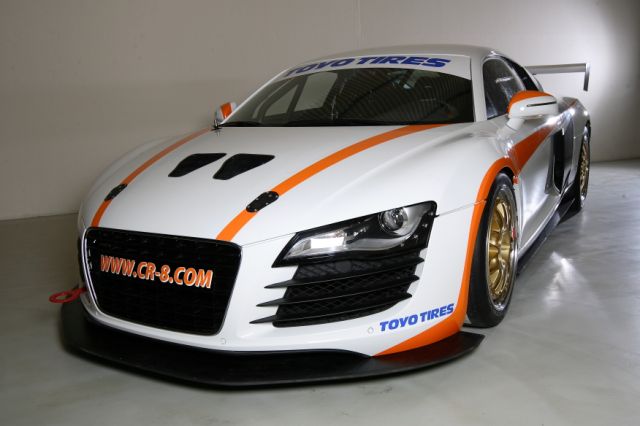 During the third edition of the TOYO TIRES 24H of Dubai, an extraordinary race car is set to have its maiden test: the Audi CR-8. It is the competition version of Audi's R8 sports coupe, developed and prepared following an initiative by Creventic BV, the organizers of the TOYO TIRES 24H of Dubai and the inaugural 24H SERIES, a championship of 24-hour events that will start in Dubai. "Because of its performance and its handling characteristics, the Audi R8 is a fantastic sports car. That was the reason for us to pick this car as the basis for our latest project", says Creventic's Gerrie Willems.

For the development and preparation of the Audi CR-8, as the competition version is being called, Creventic has set up a special department and co-operated with numerous specialists in race car preparation. "With joint forces, we have succeeded in building two cars according to our ideas and visions within the shortest period of time. These cars will complete their first tests during the TOYO TIRES 24H of Dubai", says Willems. After the event, another four Audi CR-8 cars will be built for "It is our aim to offer the car for sale to interested teams. We already have received many reactions and applications."

Modifications to the first cars have been kept limited in order to acquire the necessary experience first. Nevertheless, slight alterations of the engine management system already allowed for the power output to be increased to approximately 430 hp. Another increase in performance will only be carried out when this can be done without compromising durability. Teams that have already purchased a CR-8 will be offered the possibility to have future modifications implemented in retrofit. The development of lightweight carbon fiber bodywork parts is planned for the near future in order to further lower the vehicle weight and to enhance the performance of the car. Further development steps that have been planned include an additional fuel tank for endurance race events, central wheel mounts and a sequential gearbox. Gerrie Willems: "We want to carry out the development step by step with the possibility to meet all the specific requirements that our customers may have."

The Audi CR-8 will take to the track for the first time during the TOYO TIRES 24H of Dubai. "This is not only a roll-out and a test, but also an excellent opportunity for interested drivers and teams to get to know the car", says Willems. Additional information can be found on the special website www.cr-8.com