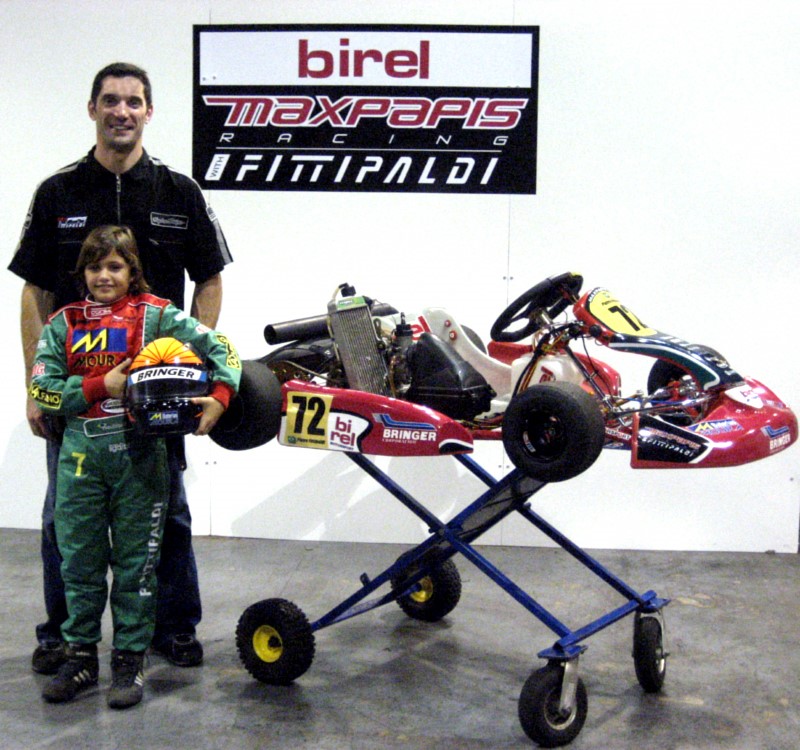 Max Papis Racing with Fittipaldi is pleased to announce that they have entered into a partnership with Birel SpA to run their chassis for the 2008 karting season.

In the past year, the team competed in several local and national races, as well as competing in the world finals Easykart championship in Italy, with drivers Pietro and Enzo Fittipaldi da Cruz. After wining many races in 2007, MPRF is looking forward to even more success in 2008 with the partnership of Birel and North American importer, MRP Motorsport.

MPRF will compete in both the Easykart Championship and in the Rotax Challenge, with the intention of going to both national finals and also competing in several local races in Florida.

As in the past, the driver line-up will be an impressive one; Pietro Fittipaldi da Cruz, 2007 South Florida Easykart Champion and his brother Enzo Fittipaldi da Cruz, grandsons of legendary race car driver Emerson Fittipaldi and nephews of team owner and race car driver Max Papis. Joining the team this year will be emerging stars and brothers, Michael and Nicolas de Quesada, sons of Carlos de Quesada, GT winner of the 2007 Rolex 24 at Daytona. Already part of the team last year as driver coach and technical assistant, Fabio Orsolon who is multiple times Brazilian Kart Champion, will be driving for MPRF. He will continue his coaching and technical assistance and will compete in the Skip Barber Series as well.

Founded in 2007, MAX PAPIS RACING with Fittipaldi is owned by racing star Max Papis, who is a GM driver for Corvette Racing, NASCAR driver for Rusty Wallace, and test driver for 2007 NASCAR Nextel Cup champions Hendrick Motorsports. Papis linked with father-in-law and racing legend Emerson Fittipaldi to give even more expertise and strength to the team.

“I started the team to give young kids an opportunity to dream and be in a good environment," stated Max. “With the support and partnership of Birel I am sure we will be even more successful as they are one of the leading kart manufacturers in the world. Birel and I are both proud worldwide representatives of our country, Italy and I have known Oscar Sala (owner of Birel SpA), since the beginning of my racing career. My first race in karts, at age 12, was on a Birel Cadetti at a local track in Borgoticino, Italy. Birel has also been behind Pietro since the beginning of his career with the Easykart series and I’m pleased to continue our relationship and bring it to the next level."

Max added, “I’m very proud that Pietro, Enzo and the rest of the team are going to be driving in a Birel. We know we have a top product in our hands and this will contribute tremendously towards our ability to succeed and win races, and reach our goal of winning the Rotax National and Easykart Championship in 2008.

Emerson Fittipaldi stated, “I am very proud of what Pietro has accomplished this past year. His growth as a driver has been spectacular and I really feel like he is on the right track. Enzo was also impressive in his debut year. I’m sure both will benefit greatly from being involved with Max and a Team so professional. I am excited to see what Pietro, Enzo and the rest of the team will be able to accomplish in 2008."

MAX PAPIS RACING with Fittipaldi will debut the Birel chassis in 2008 during the Florida Winter Tour, which will begin on January 11th in Homestead, FL.

MRP Motorsport will assist in technical support for the team. “As the North American importer for Birel, we know the importance of having quality personalities and teams involved in our program," said Marc Miller, Director of Brand Development for MRP/Birel. “We welcome the MAX PAPIS RACING with Fittipaldi program with open arms and will insure they have all the technical support they can handle."