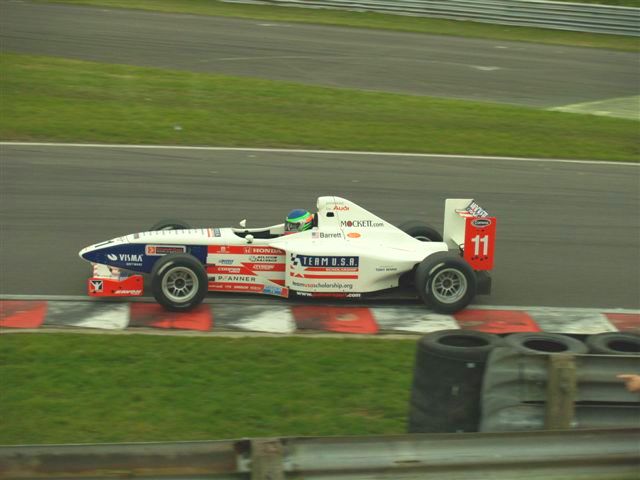 Snetterton, England – Three intensely competitive qualifying sessions today at Snetterton saw Team USA Scholarship pair Patrick Barrett and Joel Miller regularly within a few tenths of the front-runners in cool, dry conditions but struggling to make it into the top 10.

After languishing more than a second shy of the top contenders during Friday testing, the gifted Americans today made great strides. Indeed, Barrett and Miller topped the time sheets during this morning’s practice session, held in damp conditions. Their positions were not fully representative, since many of the more experienced runners opted not to turn laps on their solitary set of fresh tires which have to last the entire weekend. It was nevertheless a productive session.

"That was a good confidence-booster," noted Barrett. "We didn’t do many laps because we wanted to save our tires but we wanted to try a few things."

Both teenagers put the additional knowledge to good use as Barrett qualified just 0.288s adrift of Briton Jack Clarke’s pole-winning time of 1m04.497s during qualifying for Race One. The bad news was that he had to be content with 10th place on the starting grid – directly behind regular season Formula Palmer Audi champion Tim Bridgman.

"How can I be three-tenths off and be tenth [on the grid]?" asked an incredulous Barrett. "I saw the time on my dash and I thought this has to be top-five because I drove the wheels off the car and it felt really good."

Miller echoed Barrett’s sentiments, turning a best lap of 1m05.016s to secure a position on row seven of the grid.

"I was P5 early on," he said. "When the sun came out [briefly], that’s when everyone else did their fastest laps and I couldn’t get a clear run. I picked up over a second from yesterday. I’d say a half-second came from the [fresh] tires and a half-second from me."

Brands Hatch double winner Richard Keen took the pole for Race Two at 1m04.813s. Barrett was ninth fastest at 1m05.183s (ahead of Bridgman this time), with Miller 12th at 1m05.309s. Miller, however, rued the fact he was held up badly by Nick Tandy on his final flying lap as the data suggested he could have been among the top five.

Tom Bradshaw became the day’s third different pole-winner with 1m04.707s in the final session. Neither American found a clear lap and had to make do with 12th (Barrett) and 13th (Miller) on the grid.

"This session was a bit disappointing but overall it was a good day," concluded Barrett. "I think I made a lot of progress, just learning more about the car."

"The car felt good," added Miller. "Unfortunately, I pushed a bit too hard at Coram and went off the road. By the time I came into the pits and then got back out, the session was over. I’ve got a lot of work to do in the races but I showed this year in Skip Barber that I can come from the back, and there are passing places here…."

Incidentally, as an indication of the competitiveness of this year’s field, Luciano Bacheta (who was sixth fastest in today’s first session at 1m04.697s, after a whole year of FPA experience), took pole for the first Autumn Trophy race in 2006 with a time of 1m05.578s. American Dane Cameron claimed pole for Race Two in ‘06 at 1m05.544s. Furthermore, six different drivers today earned front row starting positions for Sunday’s three races: Clarke, Will Bratt, Keen, Legris, Bradshaw and Tandy.