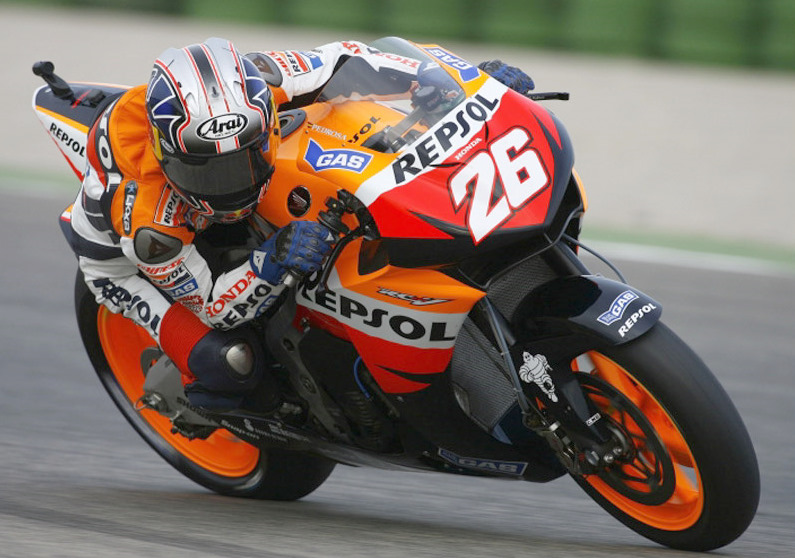 No one could match Dani Pedrosa (Repsol Honda RC212V) here today at Valencia as the Spanish superstar put in a 1m 31.517s lap to put his prowess around this tight 4.005km circuit beyond doubt. Casey Stoner (Ducati) was second fastest and Nicky Hayden (Repsol Honda RC212V) completes the front row.

In temperate conditions with the track surface at 26 degrees and with riders enjoying an ambient temperature of 21 degrees under sunny skies it was Stoner who topped the early order here in Valencia. But his early marker of 1m 33.378s was soon bettered by John Hopkins the Suzuki rider.

With 51 minutes of the hour-long session remaining former World Champion Valentino Rossi (Yamaha) crashed heavily coming out of turn one. He broke bones in his right hand and jarred his back in the crash and will make a decision on whether or not to ride tomorrow.

This could have a significant bearing on the destination of runner-up spot in the World Championship. If Rossi does not ride and Dani wins the race, then he would overhaul Rossi for second overall in the points standings. But these are all ‘ifs’ at this stage.

Dani ran off track and then pitted just after Rossi’s big crash and the order at the front of the grid at that stage was Hopkins, Stoner and Marco Melandri (Gresini Honda RC212V). As race distance work occupied most riders it was left to Kawasaki man Randy de Puniet to go for an early qualifying tyre and shoot for a pole time.

He managed a 1m 32.968s time with 38 minutes of the session left to run, but was shortly outdone by another maverick qualifier in the form of Yamaha rider Sylvain Guintoli who turned a 1m 32.821s lap to temporarily deprive his fellow Frenchman of provisional pole.

There was more to come from Guintoli though, the French ace lowered his time to 1m 32.188s to tighten his grip on pole and with ten minutes remaining of the session he was in command of the grid. But as Hayden lifted himself to second it was clear that Guintoli’s time would not stand for long.

Sure enough it was Dani who first destroyed it when he notched a 1m 32.128s time. Stoner responded with a 1m 32.088s lap and with five minutes left on the clock the order was: Stoner, Pedrosa, Guintoli, Hayden, Melandri then de Puniet.

Nicky had more left though and his 1m 31.903s effort was enough to grab pole until Stoner shaved two tenths off Hayden’s best effort to steal number one slot again. But it was left to Pedrosa to put the issue beyond doubt with his 1m 31.517s masterclass that would remain the unbeaten time.

Dani said: “Well, I’m very happy to be on pole position again – especially here in front of my home fans. We must try to improve our machine settings further and find that little bit extra for the race because the lap times are still very close and we cannot relax at all. This afternoon was positive and I was able to go fast on race tyres as well. The Michelin qualifiers also worked very well again and I was able to improve on my second lap by quite a lot – which was just enough for pole position. The weekend has gone well so far and I hope I can make a good start and challenge for the win tomorrow."

Nicky said: “When I put the qualifiers on, the bike was really good and fun to ride – that was by far the most fun I’ve had this weekend and I dropped my lap time by two and a half seconds. But it’s honestly been a bit of a nightmare this weekend up to now. For whatever reason I cannot get the race tyres to work for me here. I’ve had a lot of luck with the 16-inch rear tyre at the last few races but here it’s been really tough. Being on the front row is a big advantage here, though I know these guys are going to make it tough. Race day is always a different story and anything can happen so we’ll just try to stick our nose in there, put a bid in and try to finish off the year really well."

Carlos Checa (LCR Honda RC212V) riding in his last Grand Prix, and in spite of a debilitating stomach illness, qualified 9th. He said: “Last night I suffered excruciating stomach pains. I was amazed this morning when I had recovered enough to ride and I’m very satisfied to be ninth on the grid. I will return to the hospital for secondary blood tests tonight so that doctors can confirm their diagnosis. I can only have a liquid diet and continue to take a medicine, with some mild laxative, and hope that I can complete the 30 laps tomorrow."

Melandri ended up tenth and said: “We’ve got a good race pace and we showed that on a long run on used tyres today. Unfortunately the extra grip on a qualifying tyre made the chattering worse and that prevented me from setting a good lap time. I’m disappointed because to start from the fourth row is a big handicap. It’s difficult to get the right side of the tyre warmed up at this circuit over the first few laps but I think we can use this to our advantage and cut down the gap to some of the riders at the front."

Nakano qualified 13th and said: “I had a good rhythm in the first and second sectors on that last qualifying lap, and pushed hard in that final third sector. We didn’t make many changes to the bike today as we found a good balance on Friday and we’ve also found a good tyre for the race. The start is vitally important here, as things can get busy in the first turn and for the whole of the first lap. I will have to be pushing hard right from the beginning of the race."

Toni Elias (Gresini Honda RC212V) managed 14th on the grid. He said: “It’s been a tough weekend – we’re struggling because we don’t have enough traction and the feeling is even worse on a qualifying tyre. We’ll keep working with the team to find a solution for tomorrow and we still haven’t made a tyre choice for the race, which will be crucial. I just hope we can come up with something that allows me to be consistent over 30 long laps in the race."

Kurtis Roberts (Roberts KR212V) qualified 18th and said: “It’s always frustrating, but from the team’s and my standpoint, it’s been good. It’s frustrating when you’re out with guys and you’re easily as fast as them… until you get to the last corner onto the straightaway. If we could accelerate with them it would be a lot more fun. But we’re doing competitive times with the next four or five guys ahead of us, so tomorrow hopefully we’ll be able to race those guys, and get a good result for what we’re on."