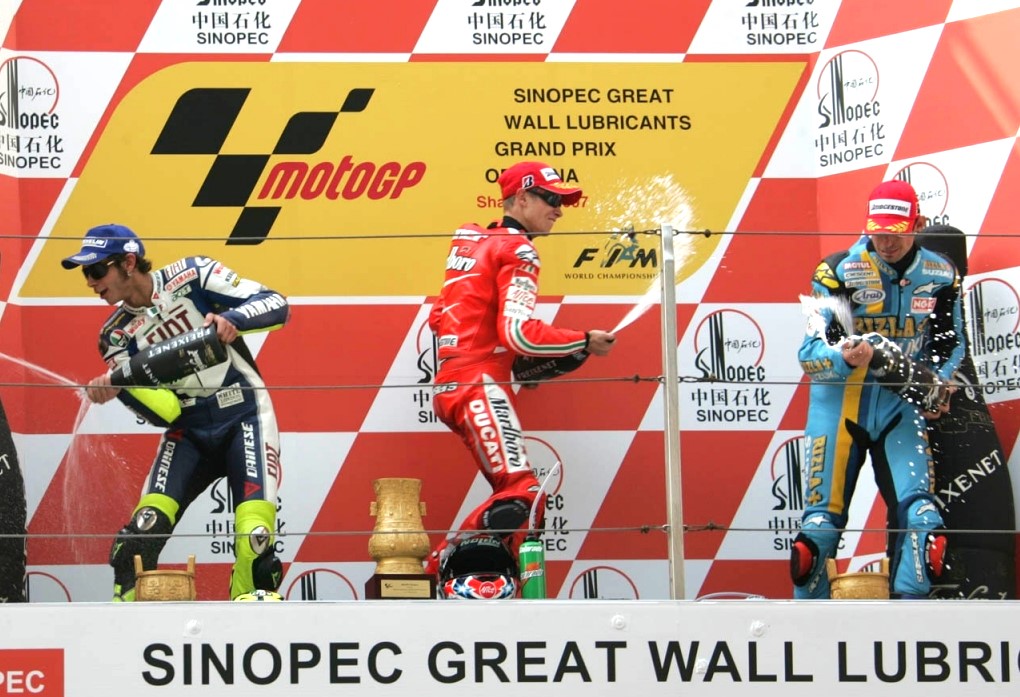 The MotoGP race at the Sinopec Great Wall Lubricants Grand Prix of China saw a great battle between Ducati Marlboro’s Casey Stoner and Fiat Yamaha’s Valentino Rossi, with the young Australian Stoner eventually emerging on top as he pulled away in the final laps using the huge horsepower advantage in his Ducati.

It was, of course, a third win of the season for Stoner, who made full use of the powerful Ducati machinery at his disposal at the Shanghai International Circuit – to extend his World Championship lead to 15 points ahead of Rossi.

Stoner again made maximum use of the Desmosedici GP07, reaching a top speed of 333.5 km/h – 7.8 km/h quicker than Rossi – on the track with the longest straight on the MotoGP calendar, and finishing the 22 lap race with a 3.036s lead.

Rizla Suzuki’s John Hopkins deservedly secured his first ever podium with a great ride into third place, the Anglo-American joining the leading pair in the second half of the race and eventually crossing the line 6.663s behind Stoner.

Brazilian veteran Barros remounted at the back of the pack and ultimately finished in 14th, in front of the last man to complete the race – Kenny Roberts Jr.

World Champion Nicky Hayden was also knocked back several positions by the incident and was again forced to fight through the traffic as his difficult season continues. The American crossed the line 12th at the end of the race.

A Rossi mistake on lap 16 saw Stoner pull away at the front and briefly let Hopkins slip into second, but The Doctor held on for second place – gaining 20 crucial points in his campaign to win back the world title. With Stoner in this form every position counts for Rossi at this crucial stage in the season.

Dani Pedrosa and Marco Melandri were left fighting for fourth place with Repsol Honda’s Pedrosa emerging from the fight on top, eventually beating the Honda Gresini man by just over three seconds.

It was also another brilliant day for Bridgestone with seven of the first nine riders crossing the finishing line on compounds supplied by the Japanese firm, repeating their success of Turkey.