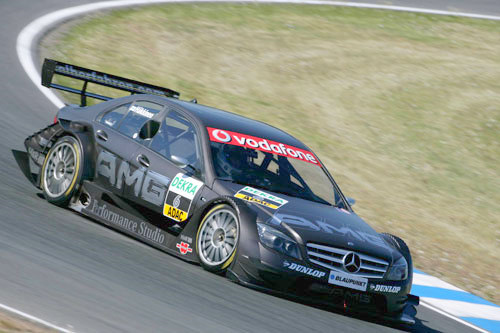 Mika HÃ¤kkinen is the second DTM pole sitter of the year. The Finnish Mercedes-Benz driver lapped the 3.696 kilometres long track in the Motorsport Arena Oschersleben in 1:22.456 minutes with his C-Class. “It has been quite a long time since I was in front. Therefore, my pole position is a great satisfaction", the crowd’s favorite said after claiming his second DTM pole.

23-year old German Mike Rockenfeller caused a slight sensation. With his year-old Audi A4 DTM, the DTM rookie will be starting from second place into Sunday’s 44 lap race in the Magdeburger BÃ¶rde region (live on ARD from 13.45 h onwards). He was 74 thousandths of a second down on the former Formula 1 world champion. Third place in the shoot-out qualifying session was occupied by Mercedes-Benz driver Bruno Spengler from Canada, who had been on pole for the Hockenheim season opener.

Until the end of the qualifying session, it was a close call between Mika HÃ¤kkinen and newcomer Mike Rockenfeller. With only a few minutes left, the driver from Neuwied set the fastest lap time and looked set to claim pole position. However, HÃ¤kkinen used all his experience and countered, demoting the youngster to second.

Hockenheim winner, Audi driver Mattias EkstrÃ¶m (S) was fourth fastest. Jamie Green (Mercedes-Benz) from Great Britain and German Timo Scheider (Audi) are lining up on the third row of the grid in fifth and sixth place respectively. The top ten was completed by Martin Tomczyk (Audi), Gary Paffett Mercedes-Benz), Christian Abt (Audi) and Bernd Schneider. Also in the second shoot-out qualifying of the 2007 season, the Mercedes-Benz driver failed to make it into the final session. In the first five grid rows, there is one AMG-Mercedes C-Class and one Audi A4 DTM each. Once again, the field of the 20 DTM drivers demonstrated how close the action is in the most popular international touring car series. In qualifying, there were 17 drivers within one second.

Going into the second of ten season rounds, Audi driver Mattias EkstrÃ¶m is leading in the points’ standings with ten points ahead of his rivals Martin Tomczyk (eight points) and Daniel La Rosa (six points). The race in the Motorsport Arena Oschersleben will be covering a distance of 162.624 kilometres.

Mika HÃ¤kkinen (1st grid position, AMG-Mercedes): “It has been quite a long time since I was in front. Therefore, my pole position is a great satisfaction. Especially after I had bad luck in the Hockenheim season opener, we have shown that we are back again. Today, I have shown the performance that I expect from myself. It can go on like this tomorrow."

Mike Rockenfeller (2nd grid position, Audi Sport Team Rosberg): “The first grid row in my second DTM race, that is just awesome. I didn’t expect being that far up. My goal was a position in the top eight, but that I am this far up is also a huge surprise for me. For the race, a good start is essential in order to make it through the first corner without any trouble."

Mercedes-Benz-Motorsportchef Norbert Haug: “Qualifying was very exciting, the top position went back and forth quite often. Of course, I am happy with Mika HÃ¤kkinen’s pole position here at Oschersleben, a circuit that is definitely not ideal for us. Tomorrow in the race, beating the Audis will not be easy for us either, Mike Rockenfeller has shown a tremendous performance in qualifying, thanks that he didn’t take pole away from us. Bernd Schneider was slowed down and lost two tenths of a second. In qualifying, that means that you can’t do anything anymore. But with a good start in tomorrow’s race, he can still catch up from 10th."

Audi-Motorsportchef Dr. Wolfgang Ullrich: “The fact that Mike Rockenfeller is strong here doesn’t surprise me. In testing, he already has showed that the track suits him. I am happy that he is among the front runners as a young driver. In free practice this morning, Mattias EkstrÃ¶m has destroyed his splitter and had to use a new one in qualifying. Because of that, his car was not as good as before. But I am convinced that he will find a good set-up for the race. The first three grid rows are evenly split up between Audi and Mercedes-Benz, there are five Audis and five Mercedes among the top ten. When the cars are making it through the first corner tomorrow, it will surely be a good and exciting race."