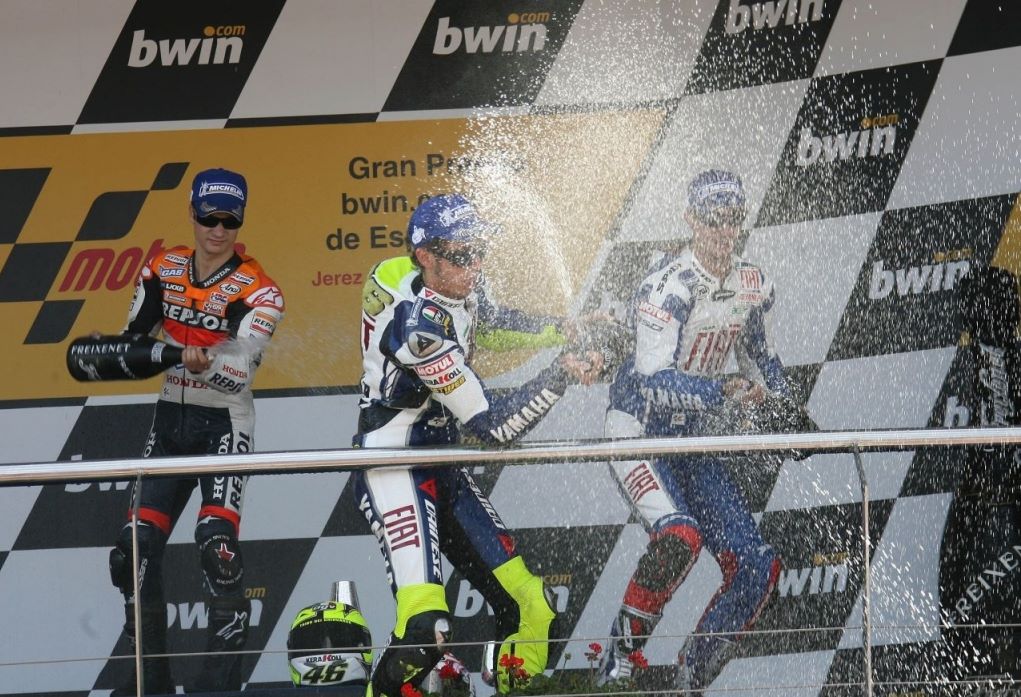 Valentino Rossi bowled all challengers to take victory at the Gran Premio bwin.com de EspaÃ±a and put himself at the head of the overall classification. The five time MotoGP World Champion was never troubled after passing poleman Dani Pedrosa midway through the opening lap, and ended his five race longest ever winless streak with a masterful display of how to lead a Grand Prix.

‘The Doctor’ has won at Jerez on four previous occasions, and marked victory number five with a special celebration alongside his fan club. Decked out in skittle costumes, the group fell at the Italian’s feet as he gave them an underarm bowl on his parade lap.

Hyped up as a battle between Rossi and Pedrosa for dominance of the Spanish circuit, the race never really became a duel between the two riders. As the Fiat Yamaha rider continually upped his race pace, Pedrosa was left with little to do but follow his rival into second. Whilst clearly unable to keep up with Rossi, he was likewise unfazed by the presence of third placed Colin Edwards nearly three seconds behind him. For the ‘Texan Tornado’ the Gran Premio bwin.com de EspaÃ±a marked a welcome return to the podium after an assured ride.

Aiming to give the Spanish fans another reason to be happy, Toni Elias was right up there with Rossi’s fastest speeds although starting from further down the grid. The exciting rider finished in fourth after some excellent overtaking, just edging out Casey Stoner who couldn’t repeat his dominance from two weeks ago. The Australian Ducati rider himself was once again mature in his overtaking choices, and was rewarded with some valuable points for the World Championship.

Carlos Checa, starting from the front row for the first time since the 2005 Portuguese Grand Prix, rounded off the top six, ahead of reigning World Champion Nicky Hayden. ‘The Kentucky Kid’ made a fantastic start, but was unable to get near the leaders and dropped off towards the end of the race. Marco Melandri, Chris Vermeulen and Shinya Nakano completed the top ten. John Hopkins suffered a crash on lap 16, having just overtaken Hayden, but picked the Suzuki GSV-R800 up to finish the race, albeit in 19th. The brave Anglo-American was once again racing despite pain in his right hand.