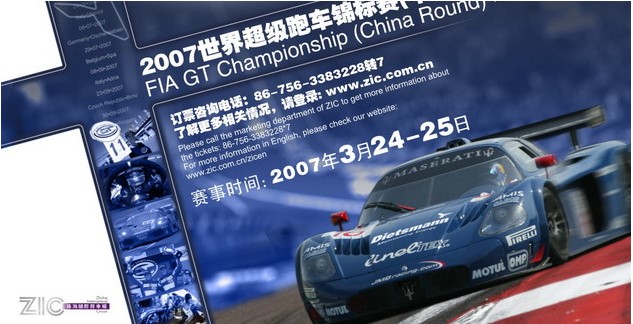 At around 9am on 24th March, a slight drizzle fell at Zhuhai International Circuit (ZIC), but it stopped very quickly, just in time for the 2007 FIA GT Championship China Round to start. It was bright and sunny again.

Perfect Racing Weekend.
At the main gate of ZIC, many giant balloons were flying in the air to welcome the spectators in. Many spectators gathered at the enquiry desk and the ticket booth to purchase their tickets. They have come from all over the world and they have all come early to see the glorious GT racing cars. It is obvious that ZIC has groomed the racing fans well here in South China.

On the grandstand, one of the spectators from Shanghai claimed that he had made plans very early to be here to see the FIA GT race. He told this reporter that Zhuhai is a lovely coastal city and two days ago he and his girlfriend visited one of the hot spring resorts in the area for a short stay. After the FIA GT race, they will also visit Hong Kong and Macau, rounding off a perfect racing vacation.

First race of the championship
Actually at this time, many beautiful and varied supercars have gone on track. The entire atmosphere around ZIC is filled with engine noises. The 80 minutes free practice session was held in the morning.

There were many changes to the 2007 championship. First is the race weekend format. It has been shortened from 3 days to 2 days. The race itself is also shortened from 3 hours to 2 hours. Another significant change is the pit stop strategy. All cars must stop twice during the race. Another important difference is the allocation of 3 sets of new tires per race only. As the first round of the championship, teams are anxious to gather as much data as possible to get used to the new regulations.

Magic Pleasure Box of the weekend
Behind the grandstand, all the commercial partners of ZIC are ready to welcome the mass of spectators. Frestech Electrical Appliances and other merchandizers are all ready to showcase their goods to the public. Plenty of snacks, drinks and food are already available and they are attracting good business.

At the service counter for the racing souvenirs, the “I come, I guess, I win" competition is a major attraction. The competition rules are very simple, guess who the top three are in GT1 of the FIA GT race and an attractive diamond necklace worth RMB1680 is yours. The competition begins on 25th March at 9am. Only the first 3000 spectators will be able to get the entry tickets.

This weekend will be another magic pleasure box for the race fans from all over the world.