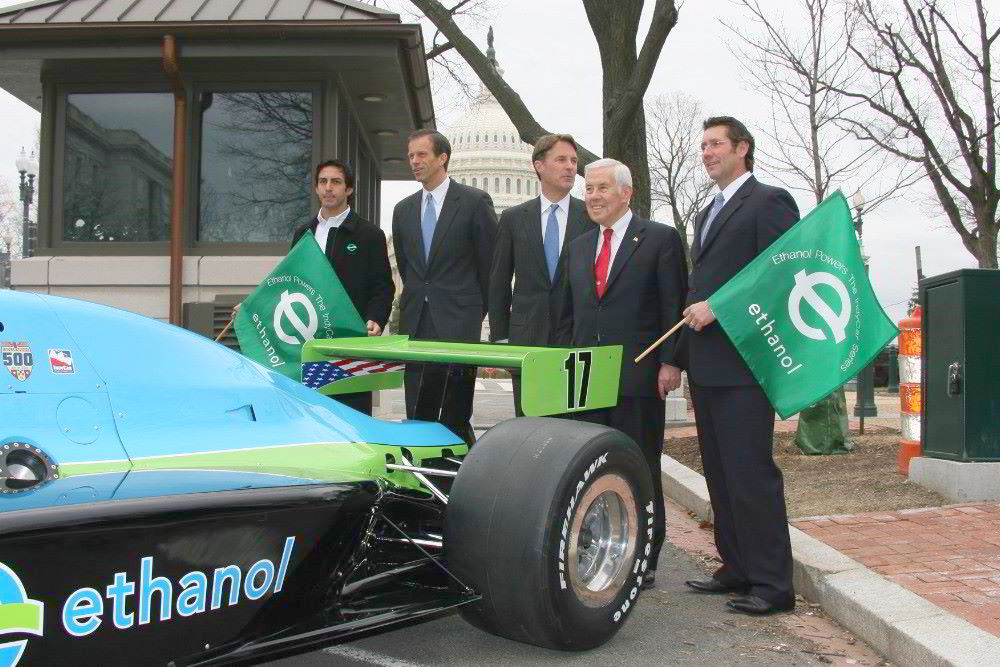 On the first day of spring, Capitol Hill was a little greener. A bipartisan group of lawmakers joined U.S. Senate colleagues Richard Lugar and Evan Bayh during a news conference to honor the IndyCar Series for its transition to 100 percent fuel-grade ethanol for the 2007 season. The series is at the forefront of "the greening of racing" — the first in motorsports to embrace a renewable and environmentally-responsible fuel source.

The Congressional leaders, who joined Team Ethanol driver Jeff Simmons, Indy Racing League founder and CEO Tony George and Renewable Fuels Association president and CEO Bob Dinneen in waving green ethanol flags in front of the No. 17 Team Ethanol car to signify the start of the groundbreaking season, are in accord with President George W. Bush's call for large increases in American production of renewable fuels such as ethanol.

The senators recognized the IndyCar Series in a Congressional Record statement for sending a strong message to race fans and Americans about the benefits of using ethanol and other renewable fuels. The green ethanol flag signed by George, Simmons, Dinneen and senators will be used to start the XM Satellite Radio Indy 300 on March 24.

"This is the kind of leadership we need – from both the public and private sector – if we are going to begin reducing our dependence on oil," Bayh said. "With its decision to switch to 100 percent ethanol, the Indy Racing League has taken the lead in encouraging all Americans to use renewable fuels."

George recognized the Indiana lawmakers, who recently joined a coalition of senators to introduce the DRIVE Act – a comprehensive, bipartisan plan to reduce dependence on oil by 7 million barrels a day in 20 years – for their steadfast support of renewable fuel production.

"I want to thank Senators Lugar and Bayh for their support of the ethanol-IndyCar Series partnership and the support of everyone on Capitol Hill for renewable fuels," said George, noting that Lugar earlier this week was recognized for his leadership by having the new renewable energy center at Indiana University-Purdue University Indianapolis named in his honor.

"Since the Indianapolis Motor Speedway was founded in 1909, innovation has been a hallmark of our tradition. Today, the IndyCar Series carries that tradition forward with ethanol. This Saturday night, the IndyCar Series will conduct the first major all-ethanol-fueled race when the green flag is dropped at Homestead-Miami Speedway. The IndyCar Series and the Indianapolis 500, the world's largest single-day sporting event, are the perfect showcase for ethanol, which can help American passenger cars burn cleaner and more economically responsible fuels.

"Ethanol is going to help provide part of the solutions to the problems we face in our environment and our dependence on Middle East oil. We urge consumers to follow the lead of our national leaders and support the country's focus on renewable fuels.

In his State of the Union Address and revisited during speeches across the country, President Bush said that it's in the country's "vital interest to diversify America's energy supply, and the way forward is through technology." The president is seeking to more than quadruple the amount of alternative fuel produced – to 35 billion gallons – by 2017. There are more than 110 ethanol production facilities across the country, producing more than 5.4 billion gallons of ethanol annually, with more in various phases of development and construction.

Currently, ethanol blended with gasoline at retail outlets reduces the need for more than 600,000 barrels of oil per day. Ethanol, which is made from renewable agricultural products such as corn, is unlike gasoline, which is a fossil fuel. Cleaner-burning and biodegradable, ethanol also is boosting local economies and expanding tax bases with production plants going online.

"While ethanol not only displaces oil and is better for the environment, the Indy Racing League has chosen ethanol for a more fundamental reason," Lugar said. "Ethanol is a high-performance fuel. It is time to increase the availability of E85 pumps and flex-fuel vehicles so that all Americans have access to this high-performance, renewable fuel."

The Ethanol-IndyCar Series partnership dates to 2005 and has advanced from ethanol being a team sponsor to working with the sanctioning body to introduce an ethanol-methanol blend in 2006. The use of 100 percent fuel-grade ethanol in the Honda Indy V-8 engines, developed over the past year by IndyCar Series and Honda Performance Development officials, has performed flawlessly in extended testing on and off the track.
"When we take the green flag at Homestead-Miami Speedway this weekend and all 33 cars are running in the Indianapolis 500 at 230 mph, we will show that you can have environmental responsibility and high performance at the same time," Simmons said.

As part of its marketing activation, the Ethanol Promotion and Information Council has created a mobile marketing unit that will be located in the midway area at the 16 domestic IndyCar Series events. Additionally, EPIC will continue its pump tours, allowing consumers to buy E10 fuel in race markets at a reduced price. The tours include IndyCar Series drivers and serves as an initiation for many consumers to an ethanol-enriched product.

"There is no better way to showcase ethanol's performance aspects than with a car going 220 mph," EPIC senior director of marketing Reece Nanfito said.

A Team Ethanol show car will be on display this weekend at the World Congress on Industrial Biotechnology and Bioprocessing at the Walt Disney World Dolphin hotel/conference center in Florida. IRL PR