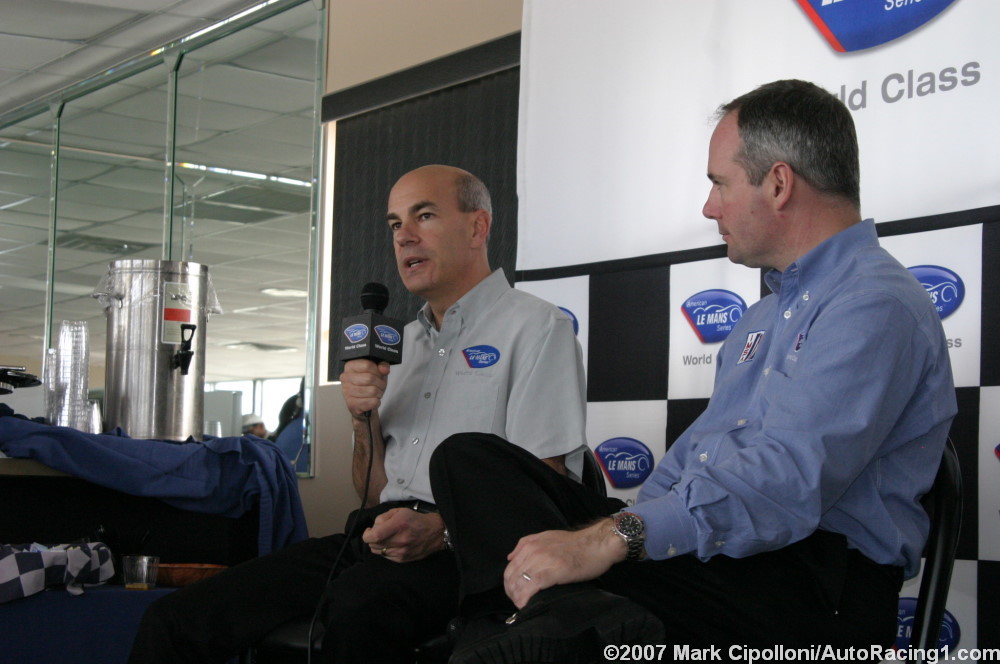 ALMS President Scott Atherton and Chief Operating Officer Tim Mayer met some of us media in Sebring on Tuesday to talk about the status of the series. Atherton expressed enthusiasm for the new markets ALMS will be entering in 2007 in conjunction with Champ Car and IRL – St. Pete, Long Beach, Detroit and Mid-Ohio. He also pointed out all the new sponsors who have entered the series such as Lowe's, DHL, Hyatt Hotels and XM Satellite Radio.

Their support series like Formula BMW (over 30 cars), Star Mazda (45 cars) and IMSA Lites (as many as 30 cars) are all in very good shape.

There are new teams in the LMP2 and GT2 classes, both of which are flush with cars. However, the LMP1 and GT1 classes remain a struggle with just one manufacturer team in each – Audi in LMP1 and Corvette in GT1. While they are hopeful Aston Martin will be back to take on Corvette, the distinct possibility exists that Audi and Corvette will race themselves for the class wins, not a desirable situation.

The consensus among some is that the factory teams are too strong and that makes privateer teams shy away. We asked Atherton if the ACO rules preclude the ALMS from making a rule banning "Factory Teams" and he responded no there was not, and that they could someday do that, but he underlined that for right now ALMS just wants to stay the course because they feel it is on the right track. They are having dialog with the ACO to address some of these issues.

Another issue was raised about whether ALMS would be viewed as a support series because its race with Champ Car and the IRL run on Saturday, and are not the feature race on Sunday. Tim Mayer went to great lengths to explain why being in those markets are so important and how race promoters want their Saturday event to be as big as their Sunday event. Mark C.