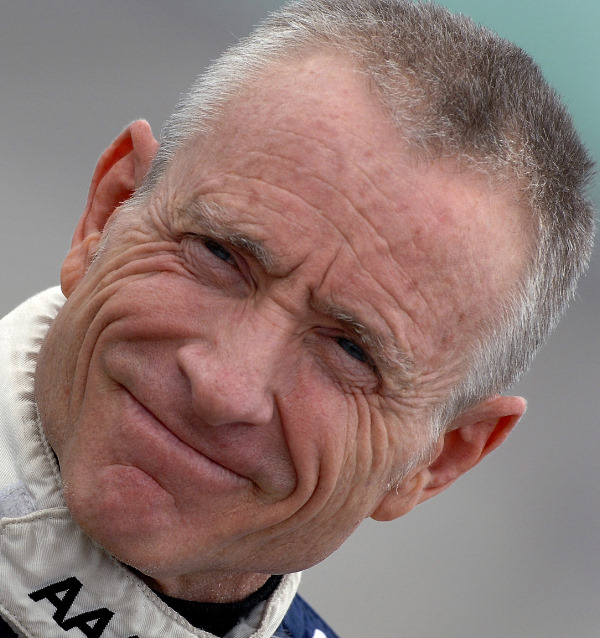 We've just had a couple of days to get used to everything and remember where the switches are and where the gauges are and figuring out how to read the gauges. It's a lot different territory. Driving the car is not that different. I spent yesterday getting familiar with that and getting familiar with the guys and we had a blast this afternoon drafting. I really look forward to working with Ryan Pemberton and I'm excited about being a part of the U.S. Army Team. I can't wait to go to Vegas in a couple of weeks and test."

About the process of getting comfortable at Ginn Racing:

I'm already comfortable with the guys at Ginn. Just because I stayed with Jack Roush for 19 years, doesn't make it wrong for me to drive for someone else — It just makes it strange. I'm actually already beyond that. To me and many of my fans I'll always be No. 6 and a part of me will always be No. 6, but that's emotions and this is racing. We haven't spent much time educating the fans and the media about what a terrific opportunity this is to be on the ground floor and help be one of the architects for the future of Ginn Racing, just like Roush Racing. This is not a short term endeavor for me. I see it being long term — as long as Roush was. I wouldn't be surprised to be with Ginn in 19 years. I probably won't be driving them, maybe I'll be driving the hauler or something like that, but I expect to be around. The cool opportunity that I have is that I get to do whatever I want to do. That can be drive Cup cars or Busch cars and I get to mentor young drivers or do whatever it is that I would like to do there. If you look in depth you have Gary DeHart there and he's a Cup champion. Sterling Marlin has one two Daytona 500's. You have Slugger (Labbe) and the success he has had and Peter Sospenzo and Joe Nemechek and the success they have together and you have Ryan, who's won with Joe. You have an incredible core group there that is expanding as fast as we can and building as fast as we can build to try and get where these other guys are. We hope to get there as soon as possible and then try and move on. There is an intention to try to be a powerhouse in NASCAR and there is a realization that it takes time to do that — a lot of time. In the meantime we are going to work long and hard and I think that we can get some great results this year and better results next year. There is a long term plan and I'm real excited about it and I'm really excited to worth with all of these great people and to build something.

What were your initial impressions of Bobby Ginn?

I didn't really know what to expect before I met Bobby. I did the deal with Jay Frye and signed the contract before I ever even met Bobby. I had Googled him and checked him out a bit to see what we were getting involved with, but I made the deal with Jay and the team and the U.S. Army based on what they all wanted to do and the commitment that Bobby Ginn had made to the organization. Meeting him was just a pleasant surprise. His demeanor — well he hasn't been successful like he has because of luck. He is just one heck of a guy. He's a people person who is soft spoken, but very direct. He is committed to see this race team become a powerhouse in NASCAR, and if you look around at the staff their now, verses where it was a year ago, you can see that commitment is there and will continue to grow and get stronger and results will come when they may. They may not come as fast, or they may come faster than we expect.

We know how hard it is and we know what we are up against and it's an exciting challenge for all of us, but Bobby Ginn is a very special person and I look forward to working with him for a long time.

Can you clarify what manufacturer you drive for?

I'm having fun because according to a lot of you guys I'm breaking all the rules this year. I'm going to be racing a Chevy in more than just 22 Cup races. I'll be racing a Chevy in some Busch races and I'm going to race a Roush Racing Busch car here (Daytona) and Texas and I guess that's breaking the rules. We are also doing six races now in the Wood Brothers truck, so I'm going to enjoy breaking all the rules in '07 and we'll see what happens in '08. I just kind of want to be like some of my heroes like Tony Stewart or Kenny Schrader , or Kenny Wallace and drive what I want to when I want to and where I want to this year. That's a little special to me. I've raced for 23 years and I'm going to race the heck out of that U.S. Army car this year and from the drivers seat it really won't matter to me.

Are you going to be a more edgy driver now that you aren't chasing the championship?

Are you asking me if I'm going to be scraping behind the hauler (laugh). You know, I race by a code and that code is not really based on point racing. Now I've always point raced from the start of my career, but my code — what I think is right and what I think is not right — will not change. Now certainly it will be nice to know that taking a risk on a pit stop is not going to break my life or career. When you race in points you live and die by every single point and that has certainly taken its toll on me and I'm excited about not having to deal with that in 2007.

Can you be a force to be reckoned with by the likes of Roush?

I think that will be a tremendous challenge in 2007 for the team, but we have every expectation of being a rival of theirs. It might take time, but I certainly feel that I have as much of a chance of winning a race in 2007 as I did in 2006 and that is certainly a good feeling. But to do it more on a consistent basis, that is going to be tough. There are a lot of great people here, but we still have a lot of expanding and learning to do. It's a great challenge, but I look forward to being able to be a part of it.

What has impressed you about Bobby Ginn?

Bobby is just a really dynamic person. He's very comfortable to be around and it's just obvious to see why he's been so successful once you've been around him a little bit and you guys should get to know him. But again, I made this deal with Jay Frye, whom I've known for 10 years. I did my homework on Bobby and what impressed me about the whole package was the commitment they have made to what they want to do and what they want to achieve. I was impressed with the commitment that Bobby has made to help get there and they allowed me to tell them at what level on wanted to participate. I have the best gig in NASCAR as far as I'm concerned. I got to lay out exactly what I wanted to do at this stage of my career. I'm not 24, so for where I am, I think I have the best deal in racing. I'm the happiest I've ever been in my life. I'm very excited to go to the race track each and every day. I'm very excited to work with Regan Smith this year and Ricky Carmichael and Jesus Hernandez, who is a developmental driver — and as we speak is testing one of my late models. He is going to race one of mine and Matt's late models at New Smyrna during Speedweeks. I'm living the dream and having the time of my life.