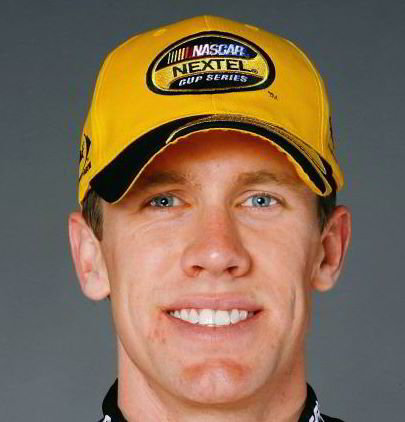 Carl Edwards, driver of the No. 99 Office Depot Ford Fusion, is optimistic going into the 2007 season. Edwards heads into the new season reunited with crew chief Bob Osborne; the two teamed to make the Chase in 2005, Edwards’ first full season in the series. (Osborne started the ’06 season with the 99, moved to the 26 early in the season and returned to the 99 for the final two races of the season.) Edwards met with reporters in the infield media center at Daytona International Speedway prior to Monday’s first test session, and talked, among other things, about Osborne’s return to the team.

CARL EDWARDS – No. 99 Office Depot Ford Fusion – WHAT ARE YOUR THOUGHTS HEADING INTO THE 2007 SEASON? “Man, I’m just really excited to be here. I flew in last night and it was really neat to realize that the season’s going to start and get to run in the Daytona 500. I’m excited, to say the least. Our whole Office Depot team is ready to go."

WHAT HAS CHANGED ON YOUR TEAM HEADING INTO THIS YEAR? “The biggest thing that’s new is Bob Osborne is back. We got to run the last couple of races with Bob. And, a couple of other things with management and engineering and things like that at the shop, but no huge changes, just things that we think that we could do better as a team to be faster even before we get to the race track. I’m really excited about all of the stuff at the shop, excited to have Bob, and hopefully the cars are just a tick faster."

ARE YOU BECOMING A RECORD MOGUL? YOU’VE GOT A CD COMING OUT… “I’m no mogul, but my buddies, some of ’em are really musically talented so we bought some recording equipment. It’s been fun, it’s been something different. The biggest thing I do is smile and say, ‘That sounds alright.’ They’re having their first concert on January 25th in Columbia, Missouri, and all the proceeds are going to the Dream Factory, helping all the kids out there, so it’ll be a lot of fun. But, I go to bed at night, I think about racing; I wake up, I think about racing. I get to run the Busch series fulltime, and the Cup series, and that’s just something that’s just a little bit different so every once in a while when I stop in at home I can kind of see how that’s going. It’s a lot of fun."

WHAT WILL IT MEAN TO HAVE BOB OSBORNE BACK AS CREW CHIEF? “Obviously, Bob and I had a lot of success. From my first Nextel Cup start through that whole 2005 season, we got along really well and we learned a lot about each other, and I think that having him back is going to be good for a number of reasons. Wally Brown did a great job and I was really sad to see him leave, but it’s going to be nice. It’s a familiar face, a familiar guy on the radio and somebody who definitely wants to win as badly as I do, so it’ll be neat."

YOU ARE GOING TO RUN A FULL SCHEDULE IN BOTH CUP AND BUSCH – BUT WITH A DIFFERENT CAST OF CHARACTERS… “I’m really excited about it. I was thinking about that this morning a little bit. The first time I ever heard of someone running both full schedules was Kevin Harvick, and I remember thinking, ‘Man, that would be so cool to race that much,’ and I’ve been able to do that the last two years, so it’s been a blast. We’ve got Scotts on board on the Busch car and that’s going to be a lot of fun to work with them again. To me, it’s great to be able to race on Saturdays. It’s kind of relaxing. It’s a good time. As far as the new guys are concerned, it’ll be a blast to race with all of them. I’ve been meeting guys I never met before, and it’ll be fun to race with them."

LAST YEAR THERE WAS A LOT OF UPHEAVEL AT ROUSH. DO YOU THINK THINGS ARE SORTED OUT NOW? “Hopefully they’re sorted out. The biggest thing is, things are always going really well when you’re running well on the track, and 2005 was such a great season, and we won so many races and all of the teams were in the Chase. Everything was great. “And then we went into 2006 and we didn’t change much because you don’t really want to change a lot if it’s not broken, and a lot of the other teams gained ground, so we slipped just a little bit behind. From my perspective, I feel like we’re headed in the right direction. We’ve evolved and trying a couple new things and folks in a couple of different areas, and it should be pretty good."

DOES IT ONLY TAKE THAT LITTLE BIT TO FALL BEHIND? “Oh, yeah. I’m telling you, a tenth of a second can mean the difference between running first and running 12th, or whatever, really easily. A lot of times this year where our Office Depot car, I mean, my car felt just as good as it did when we won races the year before, and we were running 10th or 12th. The other teams advanced a little bit more than we had. That’s all that it takes. It’s amazing."

IT APPEARS THAT THE FIELD FOR THE CHASE WILL BE EXPANDED, IT LOOKS LIKE THE NUMBER IS 12 … “That would’ve been great last year."

HOW SIGNIFICANT OF A CHANGE COULD THAT BE IN TRYING TO GET IN THE CHASE, AND ONCE YOU’RE IN THE CHASE? AND, WHAT IS YOUR RESPONSE TO SOME OF THE COMMENTS THAT TONY STEWART HAS BEEN MAKING LATELY ABOUT YOU? “The first thing, obviously if Tony and I would’ve been in the Chase last year, I don’t remember the numbers but I think we scored a bunch of points, it would’ve been great. It really doesn’t matter to me; I think the more the merrier, you know? Where I grew up, the guy who scored the most points over the season won the championship, but this is more exciting for the fans, so 12 could be good. And, as far as Tony Stewart, I thought about that a little bit last night, too. What happened was Tony wrecked the 07, I got caught up in it, you know. What I did wrong was I got out of the car and made it a personal attack, said some things I shouldn’t have said. Obviously, I really upset Tony. And so for that I apologize. I shouldn’t have done that. I’ve learned we’re all in this together, all of us drivers. I’d do anything in the world for Tony, I think he’s a good guy. I hope we can put that behind us, I hope that’s water under the bridge. If we can go into Daytona and draft together and finish 1-2 in the Daytona 500 that would be fine with me."

HAVE YOU TALKED TO HIM ABOUT IT? “Really, we haven’t spoken much. To me, there’s a lot of good things in life, I love what I do, I don’t need to come into the Daytona 500 and hopefully my championship season with a grudge. I think what he did there in Pocono, I was really, really mad, and like I said, I learned from that and I learned from the things that happened with Dale, Jr., and, eventually, Casey Mears and on down the line. The things that happen on the race track sometimes you just got to keep your opinions to yourself, so if I could take back what I said, I would’ve talked to just him about it, not the media."

WHEN WAS THE DECISION MADE LAST YEAR TO CHANGE CREW CHIEFS? “The crew-chief change I found out like on a Tuesday after we ran somewhere that Wally Brown would be my crew chief and Bob Osborne would crew chief for Jamie [McMurray], and it took us a while to get going with Wally Brown, and finally towards the end of the year, Wally and I were doing great. I only say it took a while to get going just like it would anybody. He’s never done the job and he didn’t ask to do the job, he got stuck in the position. Then Wally decided that he needed to do something else, for his own reasons, and he left Roush and I got Bob back. That’s how it all worked out. I had the opportunity to switch back I think three months into the deal, and I voted to keep Wally just so we could keep moving forward. It kind of worked out crazy with Wally leaving anyway; I would’ve changed back. Jack’s the one who made those decisions and I think that he did it to do the best thing for all the teams.

“And, putting Wally in a crew-chief position, the initial reaction was, ‘Wow, he’s never done that before,’ but if Jack didn’t promote from within, if he didn’t really rely on that I wouldn’t have gotten the opportunity that I got to drive the 99. So, I’m grateful for the way he does business."

HOW IMPORTANT IS CONFIDENCE? “We were talking about the deal with Tony and stuff last year, I think there was a time last year where all of a sudden I’d wake up on a Monday morning and it was like, ‘Man, I’m not really having that much fun.’ I’m not working on being a better race-car driver, I’m working on my frustration or anger or something like that. And I think that’s been a big step for me forward just in my life. This off-season I really focused on trying to just kind of let that go, and I think that once you just go into it and give the best you can, you can give your energy to positive things and not be worried about exactly what went wrong. That all kind of turns your world around. I’d have to agree that confidence is important, but it’s bigger than that; it’s your state of mind in general."

DID YOU LOSE CONFIDENCE IN 2006? “There were times last year where I thought, ‘Man, what am I doing wrong here?’ We also had great runs, too, that made me feel like I was doing the right thing. But I think in general for me once I realized if I do everything I can and give the best effort I can, that’s what I’m to be satisfied with, not the result. If I blow a motor or wreck or make a mistake or something, you can’t dwell on that stuff, you have to march forward and do the best you can. That’s why it feels so good to say, ‘Man, I’m not angry at anybody.’ I’m letting all of that go. I want to get to the point where I can just show up at the race track with a smile and feel like I’m prepared the best I can be."