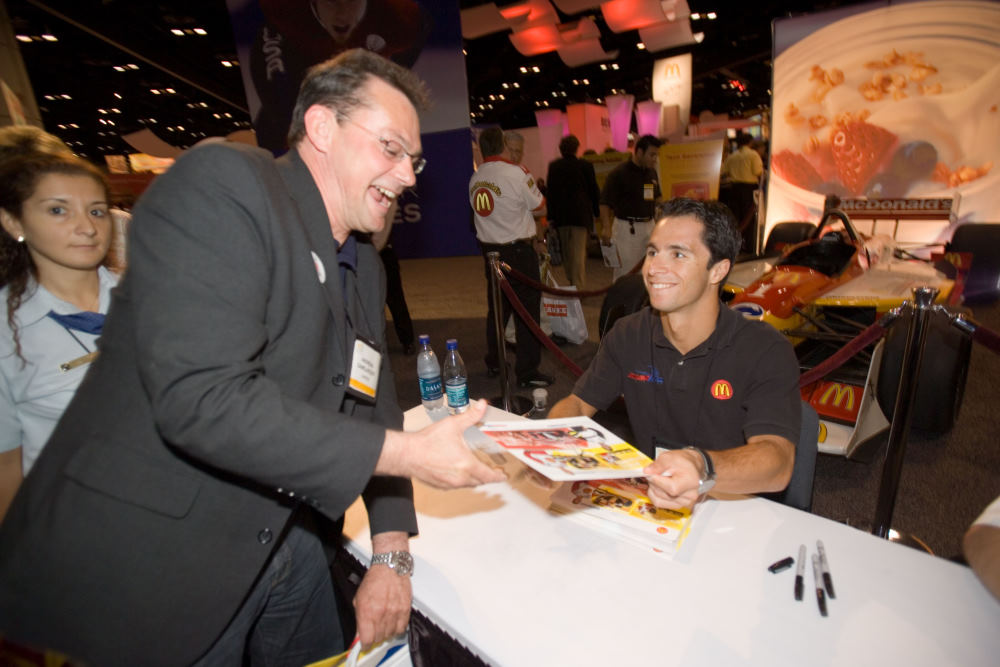 UPDATE A nice article on Bourdais and his marriage today in France.

Newman/Haas Racing driver Bruno Junqueira was a prominently featured guest today at the McDonald's World Convention, which is taking place this week in Orlando, Florida. Over 20,000 people from around the world are attending the McDonald's convention which is held every two years.

Junqueira was the runner-up to the Champ Car World Series champion in 2002, 2003 and 2004 and was leading the Champ Car standings in 2005 before he sustained a season-ending injury in the Indy Racing League-sanctioned Indianapolis 500. He has finished in the top-three 28 times in 74 Champ Car starts to earn a 38 percent average. He qualified third in his racing comeback in Long Beach on April 9 but he was hit from behind before the first turn on Lap 1 and is therefore looking forward to taking both the green and checkered flags in Houston, Texas on May 13 in Round 2 of the Bridgestone Presents the Champ Car World Series Powered by Ford.

Two-time Champ Car champion Sebastien Bourdais was unable to join Junqueira at the event due to his upcoming nuptials this Saturday, May 6 at the Cathedral Saint Julien in Le Mans, France. The wedding ceremony will be followed by cocktails and dinner that evening. Bourdais is currently ranked No. 1 on Speed TV's weekly driver ranking making him the first non-Formula One driver to occupy the top spot since the ranking was created over one year ago. Newman/Haas Racing PR