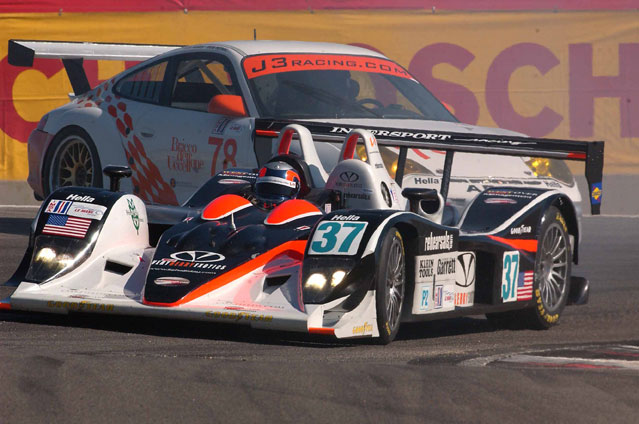 HALLIDAY's WHIRLWIND SEASON: One more race to go, and Liz Halliday's season will be complete. Perhaps then she can take a break from a year that has involved two racing series on two continents and a strenuous equestrian schedule, too.

All totaled, Halliday estimates she's spent more than 140 hours in flight this year, racking up some impressive totals on her frequent flyer account, no doubt. That includes trips back and forth across the Atlantic to drive for Intersport Racing six times this year in the American Le Mans Series. Four of those trips resulted in victory, including the prestigious Petit Le Mans. She also competed for Intersport at the 24 Hours of Le Mans for the first time.

On top of that, she ran a full season in the FIA GT Championship, which concludes this weekend, and several equestrian events, too. Halliday's racing plans for 2006 remain undecided; she says she is still negotiating with Intersport to run the full American Le Mans Series schedule.

On the side, she plans to continue her quest to represent the United States in Olympic equestrian competition.

"I have managed to take on two new horses (recently) so I will have three to compete next year," she said. "The reason being is that in eventing, you really need at least three if you want to be successful because that way you usually at least have one that is running! Unfortunately, horses do break on occasion in this sport, and they need to be able to recover properly without time pressure. Besides, I think maybe one of them could be Olympic one day, so we just have to see how things go from here!"

HE'S A RUNNING MAN: Fitness and endurance are keys in becoming and remaining a successful driver in the American Le Mans Series. Running accomplishes both, and a fine example is Corvette Racing's Oliver Gavin.

The reigning GT1 champion, along with teammate Olivier Beretta, has competed in three marathons and plans to do a couple more in 2006 (the big one in London). Gavin ran two this year, the first in Paris just a week prior to the Grand Prix of Atlanta. His legs were a bit sore, but that was offset by a career-best time in the 26-mile run.

Other drivers also run to stay in shape. For example, Miracle Motorsports' Jeff Bucknum completed the PF Chang's Rock 'n Roll Marathon in January as part of his 2005 "Extreme Goals."

SPEAKING OF WHICH: Bucknum has completed several other of his "Extreme Goals" with hopefully one more to go: surfing a 30-foot wave.

"It's still about a month away from really being in the big surf," said Bucknum, who is an avid surfer. "I was hoping to do it at the beginning of the year. It's about a 50-50 chance and definitely a possibility."

Bucknum has completed several of the goals he set earlier this season in memory of his late father-in-law and biggest fan, Dennis Capitain. Among the achievements, including the marathon were competing in the Indianapolis 500 and the 24 Hours of Daytona.

AROUND THE PADDOCK: General admission for the second annual Wheels Down Winter Test at Sebring International Raceway will be $10 per day. Overnight camping is not permitted, and the paddock will be closed to spectators. . Patrick Long will be on-hand at the American Auto Racing Writers and Broadcasters Association's annual awards banquet as a selection to the group's All-America Auto Racing team. Long, along with teammate Jorg Bergmeister, were first-team selections after winning the American Le Mans Series' GT2 drivers championship for Petersen Motorsports/White Lightning Racing. . Corvette Racing's Jan Magnussen, the third driver with Olivier Beretta and Oliver Gavin in the No. 4 Corvette C6-R, recently was named Danish Racing Driver of the Year.