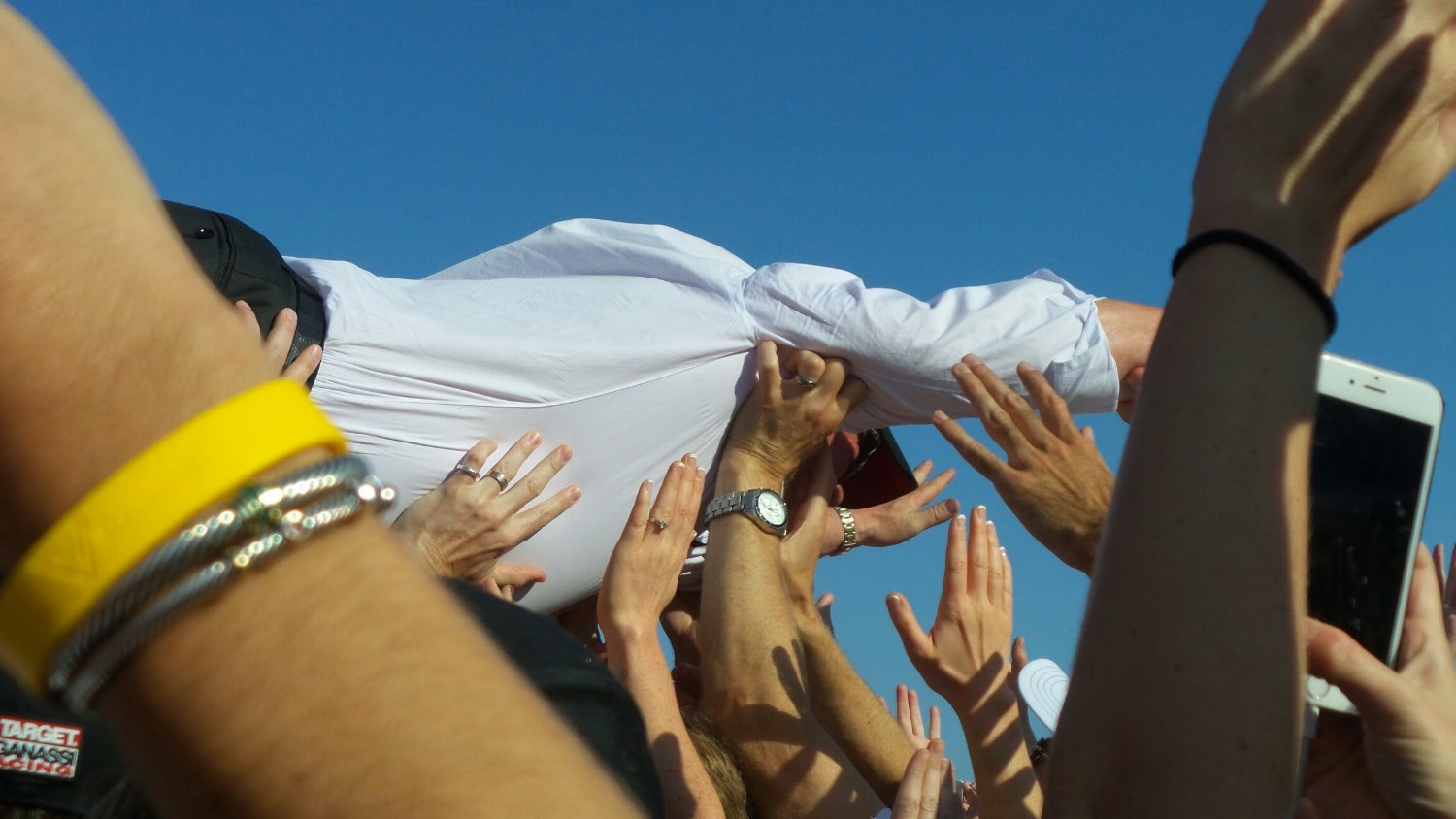 Of all the possible scenarios I envisioned prior to Sunday's GoPro Grand Prix of Sonoma, Chip Ganassi crowd-surfing was not amongst them. And while Ganassi doing his Eddie Vedder imitation would have been implausible under most any scenario, part of my disbelief was of course, the fact his driver Scott Dixon emerged from Sunday's race as the 2015 Verizon IndyCar Series champion.

Now, certainly you can tell me that the incandescent Dixon should never be counted out, and he proved that again, Sunday. But I would also be correct in noting that very little which happened in the immediate run-up to Sunday's race foreshadowed Dixon ascribing his name to the Astor Cup for the fourth time.

The majority of the focus entering Sunday's race was, understandably, on Graham Rahal and Juan Pablo Montoya. Since Rahal's improbable win last month at month at Mid-Ohio, the overwhelming focus was on the championship concluding one of two ways. Either Montoya was going to add a very prominent bookend mantel piece to further distinguish a most-unique racing career; or the popular second-generation American racer was going to parlay a tidal wave of momentum into completing an unimagined rise to prominence with an upset for the ages.

At the very least, since the race at Mid-Ohio, the IndyCar world had gotten its proverbial head around a Montoya or Rahal championship.

And perhaps that was something of a mistake. After all, silly double-points on offer in Sunday's GoPro Grand Prix of Sonoma meant there were numerous scenarios in play, with six drivers boasting a mathematical chance at winning the title. Two of them, Josef Newgarden and Helio Castroneves, needed near-miracles to win the championship. Dixon and 2014 series champion Will Power had more realistic chances, had enjoyed success at Sonoma Raceway, and of course done the deed before.

Still, Dixon hadn't been on the podium since winning Texas in early June, and Power's last top-3 finish was the Indianapolis 500 more than three months before. In essence, neither entered Sunday’s race exactly riding a wave of momentum.

However, all that changed when Dixon came to pit road under caution Sunday on lap 35

When the championship tide turned

Running third behind Will Power and Josef Newgarden, the Target Chip Ganassi Racing team was able to get Dixon off pit road ahead of both Power and Newgarden. On the lap 38 restart, Power tried to pass Newgarden up-and-under style if you will exiting turn 4, when Montoya made a move on the 2014 champion. The ensuing contact between the Team Penske drivers sent Power into a spin and forced both cars to pit for repairs. Dixon, who was already ahead of the Penske after the pit stop, moved to the lead lap 51 when his teammate Tony Kanaan came to pit road. Other than surrendering the lead for one lap on his final stop, controlled the pace from there.

While Montoya would rally to finish sixth and Power seventh, the contact between the two essentially tipped the scales in Dixon’s favor.

Still, if you ask me the race was won on the lap 35 pit stop. After all, one could argue that Dixon getting in front of the Penskes (remember, he was also in the window for one more pit stop), essentially put Montoya in a position where he felt he had to make a move. As we know, that move played right into the hands of Dixon.

Of course, Montoya like the rest of us, has seen time and time again that Dixon is virtually unbeatable in such circumstances. In fact, Dixon’s three victories this season, all were essentially cases of the Kiwi being unchallenged at the finish.

This is perhaps the greatest testament to Dixon and Ganassi. Their mere presence at the front seems to not only have the effect of them controlling the race. It seems to have the psychological effect of checkmate on everyone else.

Not that Montoya would concede this.

And hey, I get that losing the championship on a tiebreak to a former team in the last race after leading the standings all year is a tough one to swallow. To use a poker analogy, Montoya got "rivered" so to speak. I get that in the immediate aftermath of such a “bad beat" a competitor is not entirely rational.

[adinserter name="GOOGLE AD"]While Montoya had every right to be disappointed Sunday, his handling of defeat painted a less-than-glorious portrait of him and his team.

Something to think about

With Dixon now wrapping up his fourth championship he joined an elite pantheon of drivers. A.J. Foyt of course won seven championships, while Mario Andretti, Sebastien Bourdais, Dario Franchitti and now Dixon are tied in a rather illustrious group with 4.

Of course, what is perhaps interesting about the above is three of Franchitti’s four championships came with Dixon as a teammate. While winning a championship is an obvious accomplishment no matter the circumstances, Franchitti won three straight in equal equipment to Dixon.

While the feat was impressive at the time, it is perhaps even more the case in hindsight.

It’s common in IndyCar to lump Penske and Ganassi together as the top teams, with maybe Andretti Autosport composing the Big-3. All three organizations boast impressive resumes, and have combined to win each of the last 13 IndyCar titles. Plus, an argument can be made that Team Penske is the most accomplished racing operation in the sport’s history given that organizations varied accomplishments.

Granted, it’s not by a wide margin, considering they won the championship on a tiebreak. Still, with six titles in 8 years, and 11 in the last 20, one could argue that, Chip Ganassi Racing currently stands alone as IndyCar’s top team.

What wasn’t impressive was last week’s AP column by Paul Newberry calling for IndyCar to be shut down in the wake of Justin Wilson's fatal accident at Pocono Raceway. Like most people, I disagreed with the article. And after a more thorough review of it, believe it had very significant flaws.

For one, if I were to compose an article calling for a rather extreme measure (shutting down a sport that has been in existence for over a century would qualify as such), I wouldn’t do it a few days after a fatal accident. To have any meaningful effect, such a piece should be aimed at a reasonable audience and thus occur at a time when the audience will be in a position to reasonably receive the message. This could not have been the case given the timing of Newberry’s article. And the timing inherently questions what the motive of Newberry and the AP was.

Second, such an article calls for greater comprehension, detail, and specific evidence as to why such an endeavor is needlessly dangerous. This was a fly-by-night sub-1000 word opinion piece.

To be clear: if Mr. Newberry or anyone else for that matter has such detailed and thoughtful evidence, I’m all ears. But “hey everyone, bad accident five days ago, probably time to shut things down; just my opinion," is callous to say the least.

Last, while Newberry’s facts were mostly correct, his selective interpretation of them undermined his argument. Yes, it is 100% correct there has not been a fatality in a NASCAR race since Dale Earnhardt's 2001 death, and it is likewise correct that there have been three on-track fatalities in IndyCar in that span. So it is probably fair to say, statistically speaking, IndyCar is more dangerous than NASCAR. However, that position is also incredibly simplistic.

Keep in mind numerous NASCAR cars have gotten into catch fences and injured fans. And anyone in racing knows a driver assumes a level of risk a spectator does not. For example, Kyle Larson's tire AND engine dislodged from the car two and half years ago in the then-Nationwide Series race at Daytona. The tire flew into a spectator area. While the actual outcome of Wilson’s accident was worse, the potential outcome of the Larson crash was in my opinion much, much worse. It was only by the grace of God, not the fact NASCAR is somehow inherently safer than IndyCar, there were no spectator fatalities.

The above is but one example, in which Newberry does not even feign an attempt to wrestle with an incredibly pertinent issue to his argument.

Now, let me be clear, the above is not an attempt to engage in a debate comparing one form of racing to another. The truth is there are dangers at a NASCAR race, there are dangers at an IndyCar race, and a sprint car race, a drag race, an F1 race, etc. And while the dangers are perhaps not equal, the notion that one should continue and the other should close shop tomorrow is ridiculous.

This again, questions motive. Why IndyCar? Why now?

Frankly, I would have expected a lot more from the editorial staff of the Associated Press. And although I know INDYCAR is not exactly in a position where it can go around giving people the finger, if I’m Mark Miles I don’t let this go. I need to protect my sport and the people who make a living in it. And dwindling and few as they might be, I need to protect the people who cover my sport in a fair and honest manner. For that to occur a scenario in which the Associated Press has a credentialed journalist at any of my events, occurs in one instance and one instance only: over my dead body.

[adinserter name="GOOGLE AD"]What I wrote above will undoubtedly have support within the racing community; what follows may not.

My biggest take-away from and concern about the AP article wasn't so much WHAT was written, rather THAT it was written. And journalistic shortcomings aside, the fact it was written should be a reality check for anyone with a vested interest in the sport's well being.

Think about it: THE ASSOCIATED PRESS saw no issue in running an article questioning not the prudence of the series’ safety measures, rather the point of the series' very EXISTENCE. Like it or not, it is a 2015 reality that INDYCAR is not simply facing a myriad of hard questions about safety and the viability of the sport, but to explain themselves; to answer the question: why they even bother?

Let me be very clear, what you read above is not my opinion, nor that of AutoRacing1. What you read above is a sobering acknowledgement of THE REALITY that racing is viewed as an archaic and needlessly dangerous exercise by many outside the industry. INDYCAR and other racing series are not simply in a position where they have been called upon not to explain nuances of racing to the uninformed, or say, traditional stick-and-ball sport fans. Those have always been challenges for racing and will continue to be. The AP article called upon INDYCAR to answer the question: why do you exist?

To move forward thinking old adages such as "racing has always been dangerous," or "you can't prevent against freak accidents," would be as irresponsible as, sadly, the editing staff at the Associated Press.