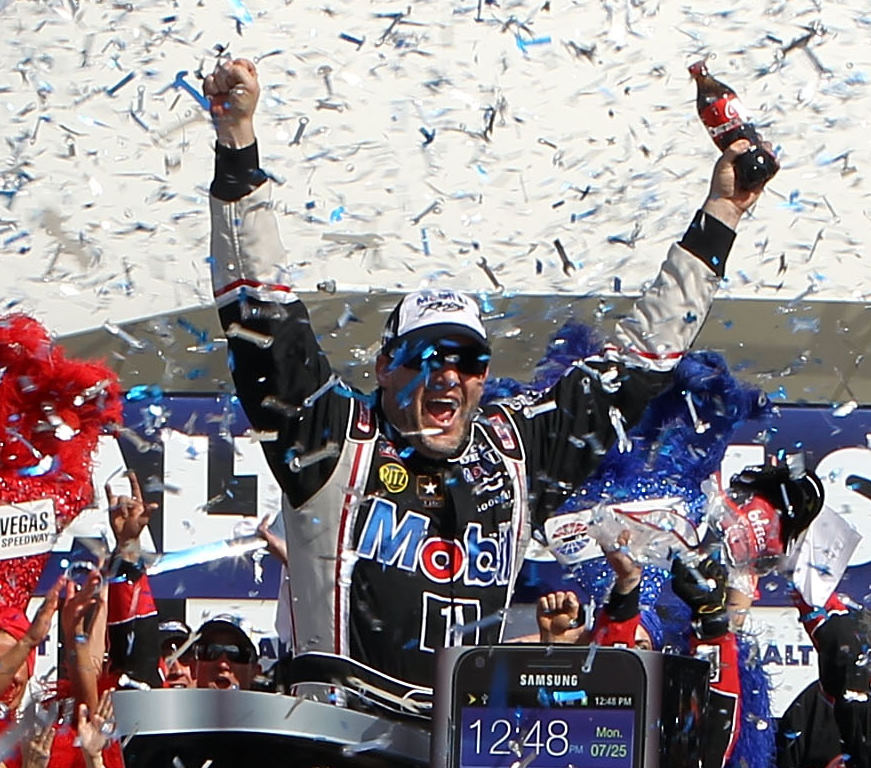 The elite teams of the NASCAR Sprint Cup Series will be once again heading west for their third points race on the 2013 schedule. This time the scene of the action will be the 1.5 mile oval at the Las Vegas Motor Speedway for the running of the Kobalt Tools 400.

There's a sense of something special when NASCAR races at Las Vegas. Everyone, from the drivers to the fans, has been saying for years that there should be a second Sprint Cup date at this track. The city really rolls out the red carpet for the fans during the NASCAR weekend. The social schedule is loaded with special events, driver appearances, special shows and concerts along with racing that begins on a Wednesday night and runs through late Sunday afternoon. Enjoy all of the festivities racing fans, It's Vegas baby! Let's face it, Las Vegas and NASCAR are two names that absolutely belongs in the same sentence.

Certainly one of the big story lines, connected to the Kobalt Tools 400, will be the performance levels of NASCAR's new Generation-Six race cars. With so many 1.5 mile oval tracks on the Sprint Cup schedule, it's safe to assume that the Las Vegas race will become a true test of what the car will or will not do and what amount of fine tuning may be required in the near future.

So far the driver's opinions of the new cars seems to vary. On one side of the issue Dale Earnhardt Jr seems to love the new car and says it better suites his driving style. On the other side of the issue, Denny Hamlin will flat tell you the car needs some more study time and adjustments. Reigning Sprint Cup champion Brad Keselowski probably put it best when he said: "I think these cars probably drive better than any other race car I have driven in my life by themselves, (as in little or no traffic), and they're probably the hardest car to drive in traffic."

Daytona, with its unique restrictor plate racing format, really wasn't an accurate barometer to measure the overall effectiveness of the new car. Drivers claimed that passing at Daytona was difficult. We certainly saw evidence of that through much of the Daytona 500 when the teams formed a single line, on the high side of track, during much of the race.

During last weekend's racing at Phoenix, crew chiefs and engineers were presented with a more accurate reading of the new car's capabilities but, despite that opportunity, there was also a noticeable reduction in passing during this race. Post race NASCAR stats indicated there were 1,213 green flag passes in last Sunday's Phoenix event compared to 1,995 green flag passes with the Gen-5 car the year before. Sunday's race in Las Vegas is expected to provide that perfect racing barometer the teams have been waiting for.

Expect to see an increased level of personnel, in the Las Vegas garage area this weekend, wearing shirts and hats with company logos that reads: TRD-Toyota Racing Development. TRD engineers are expected to be on hand, especially where the Toyotas belonging to Joe Gibbs Racing are parked, to address the performance levels of their engines. Engine failures were devastating at the Daytona race for these teams. At Phoenix the cars belonging to JGR drivers Kyle Busch and Denny Hamlin had to start at the rear of the field due to a need for pre race engine changes. Needless to say, this problem has been very unsettling for the Toyota camp.

When the green flag falls on Sunday's Kobalt Tools 400, keep a sharp eye on the progress of drivers Kevin Harvick, Kasey Kahne, Martin Truex Jr and Kyle Busch. All four of these drivers and their teams were considered pre season favorites towards becoming major players in the 2013 Sprint Cup championship. However, harsh racing luck during the first two events has placed these four teams 30th or worse in the points standings. This group of drivers are well aware that it's go time before the hole they're currently standing in gets any deeper. It's likely all four of them will be highly entertaining to watch in Las Vegas this Sunday.

Las Vegas is, of course, about gambling. To get an accurate view of which driver might be parking his car in the Las Vegas Motor Speedway's victory lane, we again turn to the professional number crunchers from the World Sports Exchange, (WSE).

To no real surprise, the WSE has five time Sprint Cup champion Jimmie Johnson on top of their list of winners and they're backing that rock solid theory with 5 to 1 odds. The early season championship points leader was strong during the first two races of the year and there's no reason to expect anything different next Sunday. He's a four time winner at Las Vegas with a series high 9.818 average finish ratio at the speedway.

6 to 1: Denny Hamlin and Kyle Busch. If aforementioned engine mysteries have been resolved, then look for these two drivers to be major players in Sunday's race. Busch is the 2009 race winner and the only driver to win at Las Vegas from the pole position. There's also the personal momentum from the home town crowd. Busch was born and raised in Las Vegas.

7 to 1: Brad Keselowski and Tony Stewart. Brad K is still looking for his first top ten finish at Las Vegas. However, we've seen his tenacity allow him to overcome those type of numbers in the past. Consider him to be an interesting long shot wager. Stewart is a rock solid wager at 7 to 1. He's the defending race champion and led 290 laps during the last two Las Vegas events.

8 to 1: Carl Edwards. Here's another solid wager consideration. Edwards is a two time winner at Las Vegas, he's coming off the momentum of last Sunday's Phoenix win which ended a two year win less streak and it appears that the pairing of new crew chief Jimmy Fennig and Edwards is turning out to be a dynamic duo for Roush Fenway Racing.

The remainder of the WSE's Las Vegas rankings includes: Jeff Gordon, Greg Biffle and Dale Earnhardt Jr at 10 to 1. Kevin Harvick is ranked at 11 to 1, two time race winner Matt Kenseth is ranked at 13 to 1 and, at 15 to 1, you will find the duo of Kasey Kahne and Clint Bowyer. The WSE rankings concludes with Mark Martin-20 to 1, Martin Truex Jr and Ryan Newman-25 to 1 and Joey Logano at 30 to 1. All other drivers, not mentioned on this list, are automatically rated at 6 to 1 odds.

Now for the disclaimer: NASCAR wants us to remind you that these numbers should be viewed for informational and entertainment purposes. They neither encourage nor condone the placing of wagers on their events. However, to quote the famous Motown song by the Four Tops: "sugar bye honey bunch-I can't help myself" (IT'S VEGAS BABY!)

The speedway was opened in 1996. The first NASCAR Sprint Cup Series race was held in 1998. Since that time there has been 15 Cup races that has sent nine different winners to victory lane. Roush Fenway Racing has the most Las Vegas wins with seven followed by Hendrick Motorsports with five. Ford leads the manufacturer's win list with seven followed by Chevrolet with six while Dodge and Toyota has one win each.

Sunday's Kobalt Tools 400 will be broadcast live by Fox Sports with the pre race show beginning at 230pm eastern time. The race re-air will be on Wednesday, 12pm eastern, on the SPEED Channel.