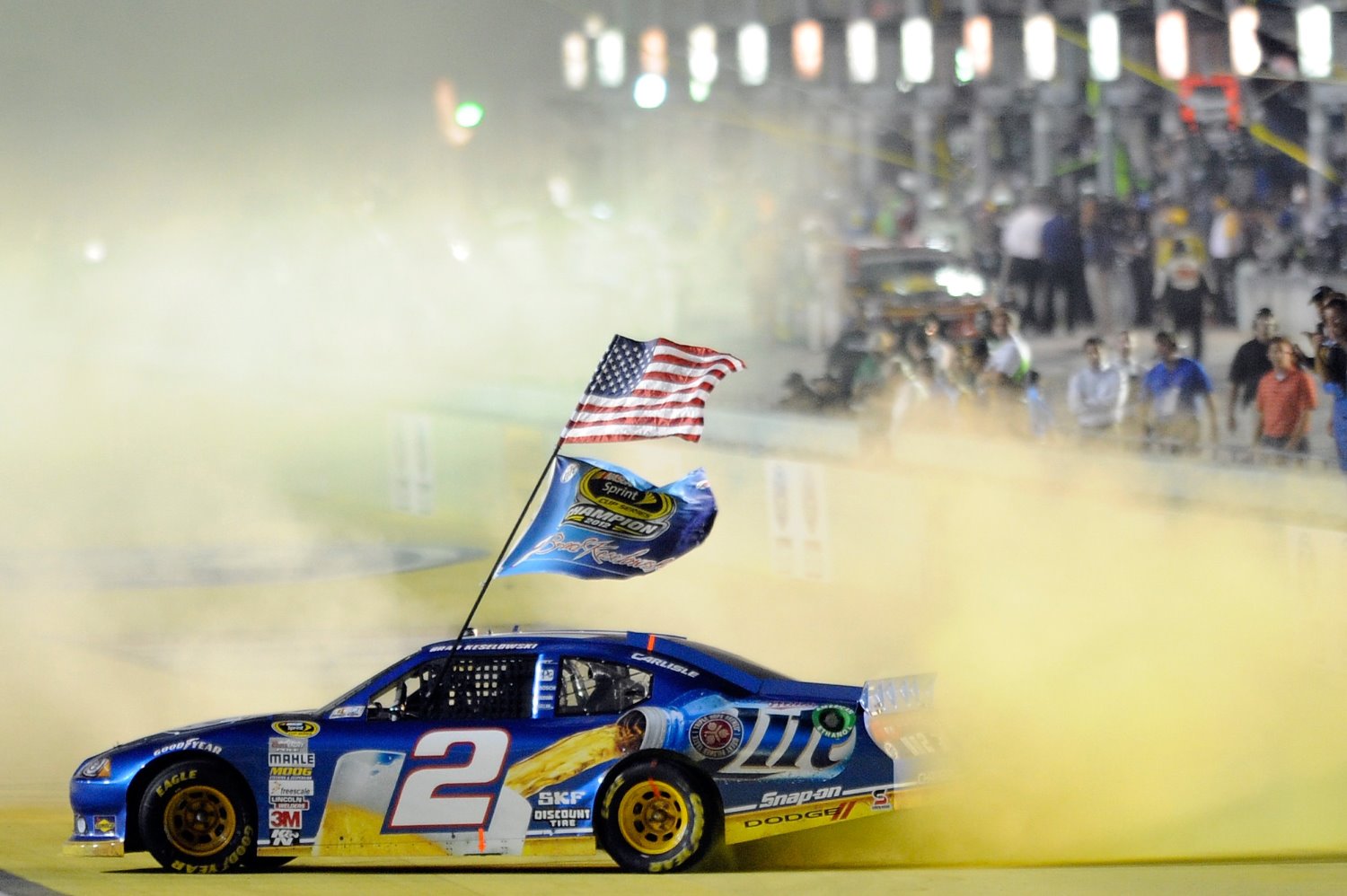 Keselowski benefited from Jimmie Johnson’s misfortune as the five-time NASCAR Sprint Cup champion saw his shot at a sixth title slip away when he dropped out with mechanical problems with 40 laps to go, allowing Keselowski to run unchallenged the rest of the way to become the 29th Championship winner in the history of the series and only the second driver to win both the Nationwide and Sprint Cup titles.

And afterwards, he chugged a beer. A lot of beer.

In just his third season running in the Sprint Cup Series, Keselowski won the title in just his 125th series start, the quickest since Gordon won his first title in 1995 after 93 starts.

But to get there, he first had to hold off five-time Sprint Cup Champion Jimmie Johnson.

Since the second race in the Chase at Chicago, Keselowski and Johnson have traded the lead back and forth, neither able to gain more than 20 points on the other.

Sunday was no different.

Starting on the front row for the final race of the season, Keselowski needed only to finish 16th or better no matter what Johnson did, but Johnson wasn’t going to let Keselowski go without a fight.

Lap 58 saw the two title contenders racing side by side for 6th place, but the racing was clean with neither driver looking to make a mistake.

Midway through the race, Keselowski was out of the top ten after a slow pit stop, and on lap 148 Johnson took the lead with a two-tire stop during a caution flag that put him within two points of Keselowski.

Then it was Johnson’s turn to get tripped up

Following a green-flag stop with 54 laps to go, Johnson’s pit crew missed a lug nut on the left rear tire, forcing Johnson back to the pits, putting him a lap down in 25th while Keselowski had fought his way back into the top ten.

Then, with 40 to go, it all came apart for Johnson, as a mechanical failure in the rear end of his no. 48 Chevrolet put him behind the wall for good, and handed the title to Keselowski.

“It’s pretty heartbreaking," said Johnson. “We were doing what we needed to, and certainly in position to put a lot of pressure on the No. 2 car. It's racing. Stuff happens. It's out of my control certainly. I just have to reflect back on an amazing year.

“Definitely not the result we wanted. But, I'm very proud of how we raced in all year long; the success we had on track; the pace we had on track. We didn't get the result, but that's life. We'll come back next year again."

Keselowski ended up with a 39-point advantage over runner-up Clint Bowyer, whole Johnson fell to third in the final point standings.

For “The Captain", Roger Penske, it had been a long road to finally claim his first Sprint Cup title in his 29th year running in the series. The veteran car owner has won it all – 15 Indianapolis 500 victories, 12 open-wheel titles and 76 Sprint Cup victories with luminary drivers such as Mark Donohue, Bobby Allison and Rusty Wallace.

In 2010, Keselowski delivered Penske his first NASCAR title, winning the Nationwide Series championship, setting the stage for Penske to finally earn the title that so many other legendary owners have held before.

“I feel amazing that I've been able to achieve this in racing," said Penske. “I’ve lauded the people that have been on that stage for so many years in Las Vegas and New York, and to be able to join this elite group and say that I'm a champion in NASCAR means a lot, and certainly as I said earlier it takes a lot of people, but I think it took the guts for me to stay in the sport.

“We could have thought, well, we won the Indy 500 15 times and we're a big deal, but I'll tell you one thing: Until you get here and you compete at the top and win it, you really know what's happened, and I think I just woke up here tonight, and it's a big thrill."

Keselowski’s title-winning run was the first for Dodge since 1975, but it may be their last as the manufacturer announced earlier this year they were pulling out of the sport, just 11 years after returning to the Sprint Cup Series.

“I want to take that trophy, I want to take it back to Detroit, I want to go over there to Auburn Hills and put it right on (Chrysler CEO Sergio) Marchionne’s desk and say this is what you’re going to miss next year," said Penske.

Penske had been close to winning the title before – taking the runner up spot with Rusty Wallace in 1993 – but not until he tapped Keselowski to replace Kurt Busch in the “Blue Deuce" did he finally put together a winning combination, with Keselowski and crew chief Paul Wolfe winning the Nationwide title and now winning the Sprint Cup – the only driver/crew chief pair to ever accomplish the feat.

“I've said it before here I guess on Friday, it's not how much money you put into your race team, it's all about the people and the human capital, and I guess Brad is right at the top," said Penske. “When he came in and said, look, I want to help you build a championship team, he looked me in the eye and shook my hand, and that's how we started, and there's no question that he's delivered way above what both of us probably thought was possible."

“I can't believe how everything just came together over the last — what's it been, three years?" said Keselowski. “Has it been three years we've been together? Two for three. That's — what is that, 0.666 average? I don't want to round up there. But that's pretty good.

“And you know what? I feel like the best is yet to come. I really do."