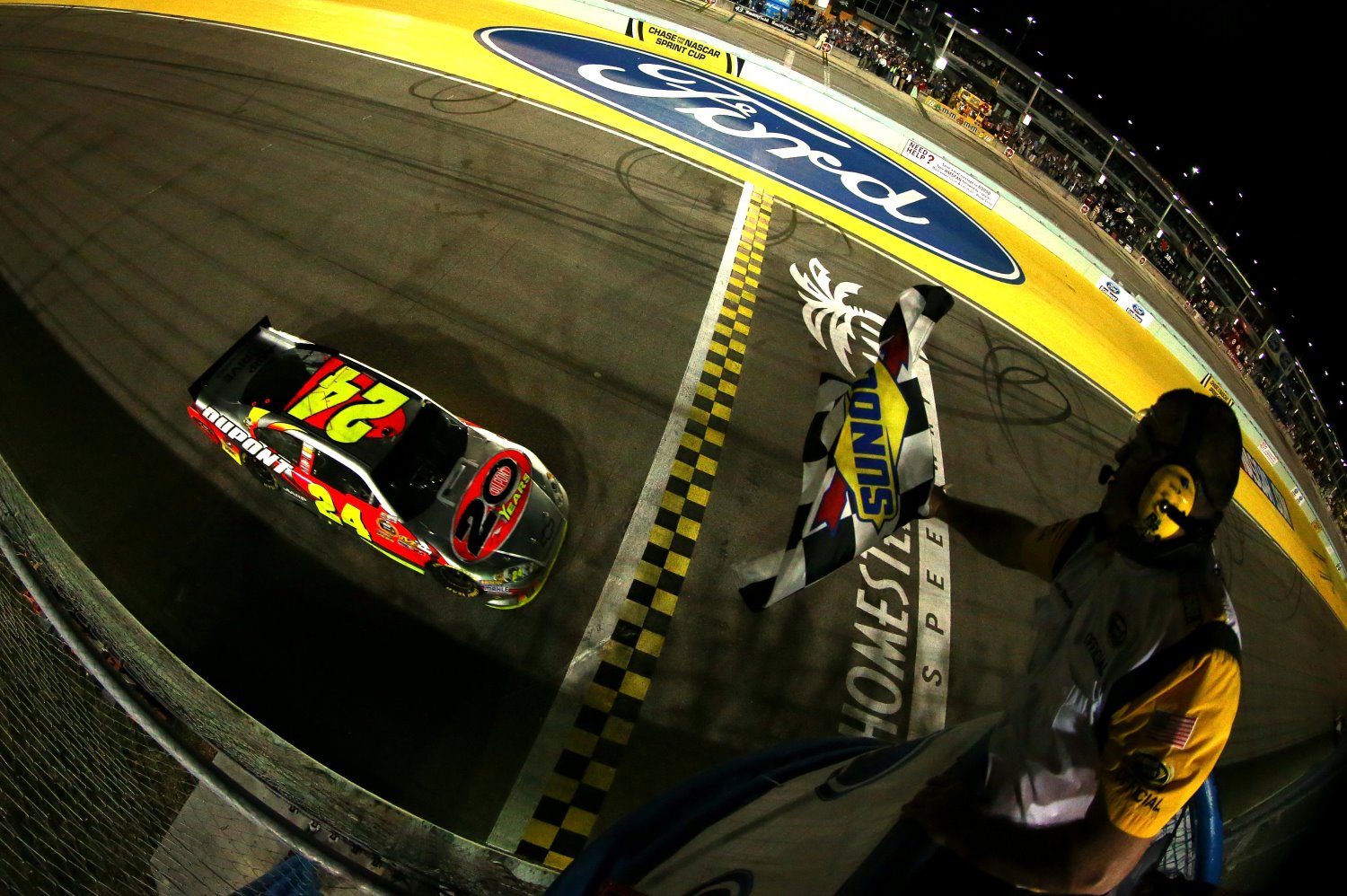 Jeff Gordon found a little redemption for a season he'd like to forget on Sunday, stretching his fuel to win the NASCAR Sprint Cup series finale in the Ford EcoBoost 400 at Homestead-Miami Speedway.

Gordon and his crew played their fuel strategy to perfection and were in the right place at the right time to take over the top spot when Kyle Busch pitted for fuel with 14 laps to go and easily cruised to the checkered flag by well over a second on Clint Bowyer.

Ryan Newman, Busch and Greg Biffle made up the rest of the top five, while Brad Keselowski wrapped up the Sprint Cup title with a 15th-place finish after Jimmie Johnson dropped out with mechanical problems with 40 laps to go.

For Gordon, it was his 87th-career Sprint Cup victory and his first at Homestead-Miami Speedway, where the team was celebrating their 20th year with their primary sponsor, DuPont.

"This is just huge," said Gordon. “Man, it's been an emotional week and a hard one; one of the hardest ones I've ever gone through just looking back on my decision.

“I knew we had a great race car going into the race. At times I didn't think we had a winning car, but you know what, we played the strategy perfectly, and we had a really good car. This is a great way for us to end this season."

It was just one week ago that Gordon retaliated against Bowyer after the two made contact in the closing laps at Phoenix International Raceway, drilling Bowyer into the wall and touching off a brawl in the garage between the two driver’s pit crews.

Bowyer, who at the time was third in the Chase for the Sprint Cup battle and a legitimate contender for the title, was knocked out of the title hunt while Gordon was fined $100,000, docked 25 points, and place on probation until December 31.

Now, here they were again, in the closing laps of the race, running first and second.

Busch was in command for much of the race, leading six times for a race-high 191 laps, taking the lead from Johnson following a round of pit stops with 53 laps to go.

But Busch’s pit cycle was going to put him short on fuel unless a late caution flag came out, putting Busch and second-place Martin Truex, Jr. right in the crosshairs of Gordon, who had just barely enough fuel to make it to the end thanks to a caution flag on lap 155 that allowed him to save some fuel.

On lap 255, Busch was forced to pit to pit for gas, putting Gordon in front with Bowyer running second.
With Gordon in fuel-conservation mode, Bowyer began to close in, leading many to wonder if Bowyer would be looking for some payback if he managed to catch Gordon.

But the much anticipated Gordon/Bowyer rematch didn’t happen – Gordon maintained his advantage all the way to the finish.
It was an unlikely end to one of Gordon’s worst performances in the Chase – his 10th place showing in the final points standings his lowest since missing the Chase field entirely in 2005 and finishing 11th. Gordon one won other race this season earlier this year at Pocono and just barely made the Chase by edging out Kyle Busch for the final spot.

The next race at Chicago he pounded the wall and finished with a DNF in 35th and just like that – his title hopes were over.

Gordon spent the next eight races largely under the radar, until his run-in with Bowyer last week at Phoenix.
Gordon would later say he regretted his actions, but it was clear that his performance in the Chase had him frustrated.
“It's like our whole season wrapped up in one week," said Gordon. “I mean, definitely the emotions, and you can try all you want to try to move past the moment, but man, it just ate me up inside all week. I just kept going back and forth about the decisions that I made and wishing I had made different decisions to backing up reasons why I made the decisions I made, and I just kept going back and forth from being disappointed, being angry, feeling that I had a right. I didn't have a right. So that just ate me up all week."

After getting taken out at Phoenix, Bowyer dropped to fourth in the Championship standings, but his second place finish, coupled with Jimmie Johnson’s DNF, put him second in the points, but left wondered what could have been

“I would’ve loved to have won that race, especially to beat him (Jeff Gordon)," said Bowyer. “To end up second in points and beat guys like Jimmie Johnson to do it. There’s several races — had I had to do over again — I wish they would’ve been different. Talladega was the biggest one. We just got behind at Talladega and never could really bounce back. I’m proud of everybody, because we were there all season long."

Kyle Busch ended up 0-3 on the weekend despite leading the most laps Sunday’s race and Saturday’s Nationwide Series race and leading 45 laps in Friday’s truck series race, finishing second on both. Busch’s lone win in all three series was in the Sprint Cup race at Richmond back in April.

“I think I’ve said it the last five weeks right — that’s our year — that’s our year again tonight," said Busch, who will finish the season 13th in points. “It just didn’t have enough there at the end to play the fuel mileage game. Guess we should have thought about that a little bit more.

“These guys work so hard all year long and it’s just a shame that we’re not able to come out here and be able to put it to victory lane like we should and like we know how to do."